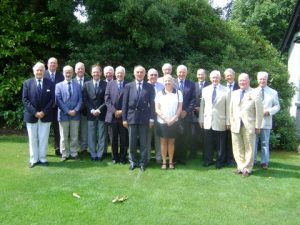 The Insurance Golfing Society of London is celebrating its centenary. Founded in 1914 the society was established to provide fixtures and competitions for golfers working across the insurance industry.

Today it remains a popular organisation, supported by many leading figures in the London Market, and holds regular events and tournaments.

The society’s first meeting was held at the Oxhey Golf Club near Watford. The club was acquired for housing in 1946, but in 1912 they had appointed Ted Ray as the professional, the year he won the Open Championship.

In 1915 activities were suspended because of the First World War, but competition resumed in 1920 and in 1925 the first annual challenge match against the Lloyd’s Golf Club was played.

A Centenary Memoir has been produced by the society, detailing its history. The publication includes stories and anecdotes about some of the many insurance personalities that have been members over the past 100 years. Among these is the story of Bertie Orr, the leading performer at the society’s first meeting 1914, who was sadly killed the following year on the first day of the Battle of Loos.

The front cover of the memoir publication.

Charles Thomson, this year’s society captain, said: “The Insurance Golfing Society has brought great enjoyment to many generations of golfers in our industry. Its centenary has brought back many happy memories of people and places.

“The future of the society is being actively debated as we are keen to ensure that the benefits we have experienced continue to be available. I hope our centenary memoir will help future members appreciate our heritage and remind current members just what the society has meant to so many of us.”

The “Costa Concordia” is finally afloat