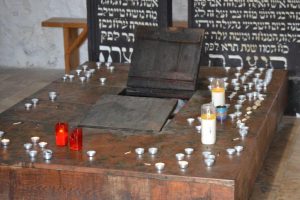 At the grave of Rabbi Moses Teitelbaum, Sátoraljaújhely synagogue.

Pilgrims pay respect to the ‘miracle rabbi’ who healed a future president,  By James Brewer

Very few professed Jews live among the 15, 000 population of the northern Hungarian town of Sátoraljaújhely, but a 19thcentury religious leader of its once thriving Hebrew community retains lasting fame as the Miracle Rabbi. Worshippers from far and wide come to pay homage at the grave of Rabbi Moses Teitelbaum who was known for his healing powers.

Sátoraljaújhely (the long name derives from the description of a nearby hill that is in the shape of a tent) is a recommended stop on any tour of the Jewish heritage of the region. The town was divided by the 1920 Treaty of Trianon, under which defeated Hungary was shrunk considerably, losing its northern territories, and its access to the sea through Adriatic ports. The border divided the city between what became the new state of Czechoslovakia and Hungary. Now it is on the boundary with independent Slovakia.

Moses Teitelbaum (1759-1841) brought Hassidic Judaism to the area. He was widely renowned for his humanity and intellect: his followers said that “the soul of Prophet Jeremiah soul lives within him.” 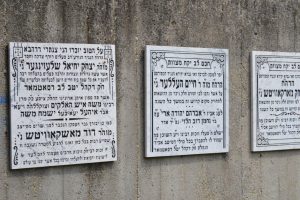 Plaques on the walls of the synagogue, Sátoraljaújhely. Photo courtesy of www.  kosiceregion.com

Rabbi Teitelbaum, who arrived from Poland in 1808, gained the epithet miracle after he was said to have cured a nine-year old boy, whose Lutheran family lived in a nearby town. Citing the Psalms, he predicted that the child would become a man of great importance. The youngster was Lajos Kossuth and the prophecy was fulfilled.

Kossuth (1802-1894) was to lead Hungary’s struggle for independence from Austria, and he was in power briefly as regent-president of Hungary in 1848 before being forced into exile by a Russian invasion.

The young Kossuth had suffered from serious throat problems, and it seems that Rabbi Teitelbaum used oil from a lamp to disinfect his larynx. The background to the incident is that the Jews were able to practice healing at a time when the Catholic Church had clamped down on surgery, arguing that the human body is the author of the soul.

Sátoraljaújhely has played an important role in regional history, with rebellions against Habsburg rule beginning there in the 17th and 18th centuries. When the Ottomans were expelled in 1686, Jews were among those who immigrated to the town. Elsewhere the Jews were mostly in commerce, but in Zemplén county, which included Sátoraljaújhely,  they were later allowed to purchase property, upon which they bought vineyards, produced wine and sold it domestically and abroad. In further unusual activities for their populace, the Jews were prominent in farming and transport there. 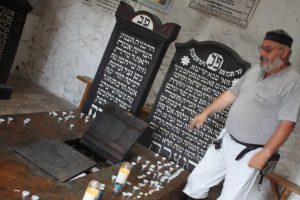 At the grave of Rabbi Moses Teitelbaum, Sátoraljaújhely synagogue.

After the upheavals of 1848, the inhabitants of Sátoraljaújhely capitalised on the town’s proximity to trade routes stretching to Poland, Russia, and Transylvania. By the beginning of the 20th century the town was home to 4, 500 Jews out of a population of 13, 000. It benefited from the fact that for most of its 20 years of existence, the first Czechoslovak Republic showed greater respect to its Jewish residents than most other European states. In particular, Tomáš Garrigue Masaryk (1850 -1937), a founder and first president of the Czechoslovak state, stood firm against the anti-Semitic currents that blighted the immediate period after the Great War.

Racist laws aimed at the Jews were extended to the region when Sátoraljaujhely was incorporated into Hungary following the Munich agreement of 1938. One account says that there were 10, 000 Jews in Sátoraljaujhely at that stage. That community – the second largest of its kind in Hungary – was to be devastated.

Following a period of persecution by local authorities collaborating with the Nazis, and of forced labour, most of the Jews were rounded up under the orders of Adolf Eichmann and sent via the city of Košice to Auschwitz. Only 380 of them returned after the war, and few stayed for long. Survivors emigrated to the US, Canada, Latin America and Israel. Caracas in Venezuela was particularly favoured, although some people settled closer to home, in Miskolc or in Budapest.

Earlier this decade the community was estimated at a mere 42, but the faithful few do their best to maintain the synagogue.