Volunteers clear beaches of marine litter left behind by others 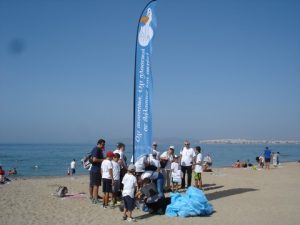 The International Voluntary Coastal Cleanup Campaign got underway in great fashion over the weekend. For what is the 23rd consecutive year, HELMEPA is yet again coordinating the activities of the Campaign throughout Greece, which for 2014 bears the theme “We cleanup all that we left behind on our beaches”.

In Athens on Saturday, 20 September, HELMEPA coordinated a beach cleanup held at the Peace and Friendship Stadium. The cleanup drew the participation of students and teachers from the IB Department of the “Geitonas” Private School, the Mediterranean Information Office for Environment, Culture and Sustainable Development (MIO-ECSDE) and the Hellenic Recovery Recycling Corporation – HE.R.R.Co. Indeed, a special HE.R.R.Co vehicle took the total of 84 large bags worth of recyclable material collected by the volunteers, back to the recycling facility for processing. Following the conclusion of the cleanup, volunteers were guided through the EU’s MARILISCO program’s mobile exhibition on marine litter, set up on site by MIO-ECSDE, as they enjoyed refreshments offered to them by the Stadium’s management.

On Sunday, 21 September, members of staff of Danaos Shipping, Associate Corporate member of HELMEPA, together with their families, completed a voluntary beach cleanup of Edem beach at Palaio Faliro. Despite the fact that the beach was relatively clean, volunteers managed to fill two large bags with litter items, which they meticulously recorded on special data sheets. 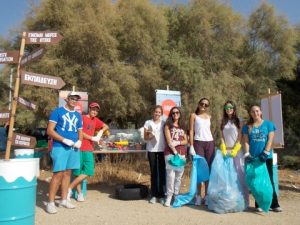 Meanwhile, in Loutraki and on the same day, 8 divers from the “Loutraki Divers” team of volunteers pulled more than 900(!) kg of litter from the seabed without the use of any mechanical means for assistance. Among their “loot” were included 36 concrete slabs, 32 metal pipes, 12 bottles of compressed gas, 9 anchors, 2 radiators, a truck battery and a garbage bin. The wrap-up results after the completion of the first year of the “Loutraki Divers” voluntary campaign titled “We Dive, We Clean” are quite impressive. For what were 34 dives completed, with a total of 132 hours worth of underwater cleanup, they have removed over 6 tons of litter from the depths of the sea.

The “Month of Positive Action for the Marine Environment” continues until  20 October, with the participation of entities and individuals who are organizing their own cleanups at Agiokampos in Larisa, Glyfada, the cities of Grevena, Heraklion and Ierapetra in Crete, Igoumenitsa, Kavala, Kavouri in Athens, Kymi on the island of Evia, the islands of Leros, Lemnos, Mytilene and Naxos, Nea Karvali, Piraeus, Porto Cheli, Porto Rafti, Palaio Faliro, the islands of Rhodes and Samos, Sitia in Crete, Thessaloniki, Varkiza, the city of Volos and Vouliagmeni in Athens.

All those interested in contributing to this global voluntary effort may participate in a nearby cleanup or organize their own beach or underwater cleanup with the support of HELMEPA. Simply return to HELMEPA the completed Registration Form by email environment@helmepa.gr or fax 210 9407327. For further information, please contact Environmental Awareness Section on telephone 210 9343088.