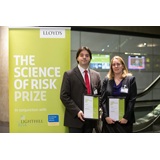 London Monday 1st of December 2014 –This year’s two Science of Risk winners have both channelled a multi-disciplinary approach to further their chosen perils of flood and volcanic eruption. (source: Lloyd’s of London)

Each year, the prestigious Lloyd’s Science of Risk prize is awarded to esteemed academics and PhD students who, through their scientific work, further the understanding of risk and insurance.

The competition is now in its fifth year. This year there were two broad categories: climate change and natural hazards.

This year’s winning submissions incorporated research papers from a diverse range of fields and sources, including clever use of satellite data, catastrophe modelling, engineering innovation and economic analysis.

Lloyd’s Director of Performance Management, Tom Bolt, who presented to this year’s winners, said: “The research submitted gave us valuable insights into new and emerging risks and how to assess them, which is the essence of our Science of Risk prize.

Dr Dougal Goodman, the Chair of the Prize Committee, praised Lloyd’s for their efforts to raise awareness of the depth of knowledge of climate change and natural hazards in the research community and promoting its the value to the reinsurance market.

“It’s fair to say that the papers looked at how to lighten the suffering and improve the resilience of communities right across the world.”

The difficulty in financing such resilience strategies involving large-scale infrastructure projects, such as barrier islands, was considered by the paper. One idea was to issue a multi-year “Resiliency Bond” to spread the upfront cost over time, while another was to impose a “Resiliency Fee” on visiting tourists.

The paper was a call to action, as Dr Michel-Kerjan explains. “As we discussed in the Science paper, it can take ten or 15 years (from design to construction) to build the necessary protective infrastructure. This is why several of the strategies we evaluated for New York City, which will be cost-effective under future climate, should be started now.”

“If one waits for another $70bn loss to act, we would have lost time and money, ” he adds. “Similar discussion should occur in the UK and actions be taken.”

He thinks the insurance industry has a vital role to play in helping build stronger communities that are better able to withstand natural disasters.

“When insurance is risk-based it can provide a powerful signal of the level of exposure those at risk actually face, ” he explains. “It can also reward good behaviour: if a family or a business invest in risk reducing measures the cost of insurance is lower.”

“The challenge though is that for political reasons, flood insurance is rarely risk-based, ” he adds. “This is a big challenge in many countries around the world.”

A new perspective on volcanoes

In her winning paper for the natural hazards category, Dr Juliet Biggs and her colleagues put big data to the test. They looked at the Global Link Between Deformation and Volcanic Eruption Quantified by Satellite Imagery in a paper published in Nature Communications.

“The idea is that as magma moves beneath a volcano it might cause the ground to uplift or subside by a few centimetres, or even metres. It’s as if there were a balloon of magma inflating and deflating underneath the volcano. The small displacements can be measured from satellite observations, ” she explains.

While the use of satellite imagery has been around for a couple of decades, the paper is the first time volcanoes have been monitored on a global scale. “Lloyd’s welcomes this innovative use of satellite data to provide early warning information to investigate risk around the world, ” says Lloyd’s Head of Exposure Management and Reinsurance Trevor Maynard.

At the time of writing 34 volcanoes were erupting around the world, including Bardarbunga in Iceland and Kilauea on Hawaii’s Big Island, where lava has slowly encroached upon villages and towns.

“We’ve used a large archive to satellite data to look probabilistically at the link between displacement and eruption so we can put a number on the proportion of volcanoes that have deformed or have had an eruption, ” Dr Biggs explains. “So we can start to turn these things into probabilistic hazard analyses, just like you might do with a metaa analysis of medical trial data.”

The recent launch of Sentinel-1 by the European Space Agency is set to boost the monitoring of volcanoes yet further. Sentinel 1A, which was launched in April, provides all-weather, day and night radar imaging for land and ocean services.

“We’re currently building a processing system which should allow us to analyse displacement data from all the world’s volcanoes and post them freely available online in near real time, ” says Dr Biggs. “That’s our medium-term goal. We hope to make this information available to the general public, volcano observatories that are responsible for the threat levels of individual volcanoes and also to the insurance industry.”

She hopes that by winning the Science of Risk prize it will open up a closer dialogue between scientists working in this space and the insurance industry.

“This paper is important because it’s a new way of looking at volcano monitoring – from a global perspective, ” she says. “And that might be particularly useful for the insurance industry because by looking at a large dataset, we can use probabilistic tools. We now have statistics that can be applied to volcanoes that have little ground-based observation infrastructure.”

“I’m very excited about winning this because it gives me the opportunity to interact more closely with the insurance industry to understand how they work and how this research might be useful for them, ” she concludes.