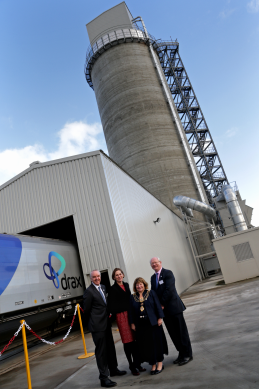 It dominates the skyline in the eastern part of the city and now the Port of Hull’s dedicated biomass terminal, built to support Drax Power Station’s conversion to a lower carbon power generator, has been officially opened.

The opening was conducted by Councillor Mary Glew, Lord Mayor of Hull and Admiral of the Humber at an event attended by representatives of Drax and ABP, as well as those companies involved in the construction and operation of the terminal.

Associated British Ports (ABP) will handle up to one million tonnes of biomass per year in Hull as part of a 15-year agreement with Drax.

The Hull rail load-out facility, which was built by Spencer Group, will enable biomass to be transported to Drax Power Station at Selby as part of an ambitious programme which will see Drax transform into a predominantly biomass-fuelled generator.

Speaking at the opening, ABP Director, Humber John Fitzgerald said: “The opening of this specialist facility is further demonstration of ABP’s infrastructure innovation. It underpins the continuing importance of our estuary in powering the UK.

“The Humber ports have always been integral to the UK’s energy supply and as electricity generation moves to a low-carbon base, we too are investing in facilities to service this transformation. Whether it’s biomass at Hull or Immingham, or offshore wind at Green Port Hull, the Humber ports will continue to be at the centre of this vital industry.”

Dorothy Thompson CBE, Chief Executive of Drax is also looking forward to a long and productive partnership with ABP.

“The Port of Hull has always played an important role in the history of our company and I am delighted to be standing here today to mark the opening of this terminal and the start of a new chapter.

“When we were looking to move to low-carbon power generation and we were considering biomass, we knew that the solution would lie with the ports here on the Humber. This fantastic terminal, and the facility in Immingham are testament to innovation, creative thinking and hard work and it makes me enormously proud to see the facility operational and officially opened.

The £16-million facility will handle biomass imported by sea from the North America and Europe in the form of wood pellets created from sustainable forestry residues and thinnings. The biomass is stored in warehouses before being delivered by truck to the new facility and unloaded into feeders which take it to a 250-metre (820 ft) conveyor, carrying it to the top of the silo.

The silo is capable of storing up to 1, 800 tonnes of wood pellets and is filled by 60 truckloads of biomass over a three-hour period, twice a day, loading at the rate of 600 tonnes an hour.

Sophisticated technology ensures an even load as the biomass is discharged into rail wagons which pass slowly through the corridor at the base of the structure. The automated system is capable of loading up to 25 rail wagons with 1, 600 tonnes of material in just 35 minutes.

On the south bank of the river at the Port of Immingham, ABP are also investing to support Drax’s biomass supply chain. Immingham Renewable Fuels Terminal is a fully automated wood pellet handling facility and in its first phase, currently under commission, will be able to handle three million tonnes of biomass per year.

Goole is situated 50 miles upriver and is the UK’s premier inland port. It handles over two million tonnes of cargo annually