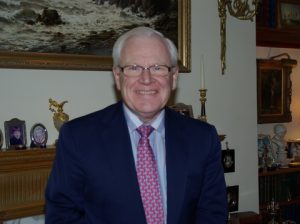 In January 2015 the nation will remember, with affection, the passing of ‘the Greatest Briton’ who ever lived. Sir Winston Churchill (1874-1965) was accorded that title by popular vote in a survey conducted in 2002. In 1965 he was accorded the rare honour for a ‘commoner’ of a full State Funeral. Such was his impact on the history of Great Britain and the world that the new queen, Elizabeth II, had decreed that he should be so honoured as early as 1953. The 16th Duke of Norfolk, Earl Marshal of England responsible for organising such state events, began the planning in 1957 under the code name ‘Operation Hope Not.’

The distinguished surgeon, Rodney Croft, has combined a life-long interest in Winston Churchill with his intimate knowledge of some of the more remarkable aspects of the funeral that he has acquired from contacts made through his line of work. The result is a delightful little book,  Churchill’s Final Farewell: the State and Private Funeral of Sir Winston Churchill,  packed with extraordinary detail and moving descriptions of that remarkable day, enlivened by interviews with many of the participants, when Sir Winston made his ‘final farewell’ on 30th January 1965.

There is an interesting discussion, with many lively anecdotes, of Churchill’s several narrow escapes with death, and of his health in general – itself worthy of a book from this author. A first myocardial infarction (heart attack) in 1941, when Churchill was aged 67, gave warning of problems to come. A stroke in 1949 was the first of nine before the final one on 15th January 1965 that led to his death on 24th January.

The original plans for his funeral assumed that he would be taken from London to his home at Chartwell, Kent, where his cremated ashes would be interred. But after a visit to his birthplace, Blenheim Palace, and the little church at Bladon, where his ancestors were buried, he had suddenly declared: “This is my place here.” The 115-page long book of arrangements for the funeral had to be completely re-written. Now the procession would have to go from St Paul’s Cathedral, through the streets of London, to Paddington Station for the train journey into Oxfordshire. 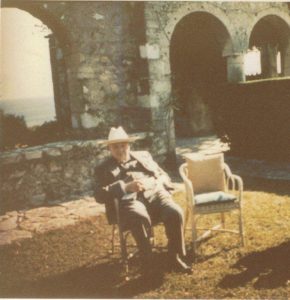 It then came to pass that, in the early 1960s, the British government was anxious to join the European Common Market and asked if President Charles de Gaulle, who had been blocking the application, could be invited to the funeral. Churchill had a fairly stormy relationship with de Gaulle during and after the Second World War and only agreed to the invitation if the funeral could be routed through Waterloo Station! This gentle reminder of one of Britain’s more spectacular victories over the French was typical of the sharp wit of Sir Winston. The story is sometimes rejected but why else would a train heading west from London leave from completely the ‘wrong’ station?

The book is packed with every kind of detail concerning the funeral processions, the service and the burial at Bladon – the minute by minute planning, the music and hymns, the peals of bells, the RAF fly-past, the railway arrangements, even the menus served on board. The words spoken during the funeral, by such great persons as Dwight D. Eisenhower (USA), Robert Menzies (Australia), Laurence Olivier and the inimitable Richard Dimbleby, remain as moving now as when first uttered. As Andrew Roberts reminds us in his Foreword, Rodney Croft has included enough of Churchill’s own speeches to underline the powerful effect they have had on the life and history of Great Britain.

There were 3, 000 in the congregation at St Paul’s; 321, 360 filed past the coffin lying-in-state at the rate of 4, 000 per hour; half a million lined the streets of London to watch a funeral procession a mile long; 350m people viewed it on television around the world (10% of the planet, including 60m Americans, 40 m Europeans and 12m Russians). 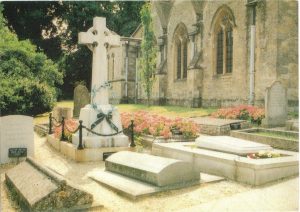 St Martin’s, Bladon, cemetery. The Celtic cross marks Lord Randolph Churchill’s grave; that of Winston and Clementine is at the front right with flowers.

As the train carried Churchill’s immediate family towards Bladon they found his favourite Pol Roger champagne on board, with a note saying: “Don’t be despondent, have a drink, Love Winston”.

With the kindest of help from the Churchill family, Rodney Croft has given us a heartily recommended, warm and intimate look at a truly great state occasion. As Churchill’s wife, Clemmie, said to their daughter, Mary, “It was not a funeral, it was a triumph!”

(Mr Croft is a semi-retired general and vascular surgeon, who after a career with the National Health Service works as a private consultant. He is a Dean of the School of Medicine at St George’s University in Grenada, West Indies, the third largest school of medicine in the world; a Fellow of the American College of Surgeons; and a Freeman of the City of London. His special interest in the late Sir Winston Churchill goes back to when at four years old his mother told him: “Like Winston Churchill you were born six weeks premature.” 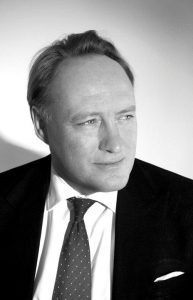 Andrew Roberts, who wrote the foreword. Photo by Nancy Ellison.

In preparing his book, he had access to important archives and interviewed the late 11th Duke of Marlborough at Blenheim Palace in 2013, (who in 1965 as the Marquis of Blandford greeted and then accompanied the mourners after the service at St Paul’s Cathedral on the funeral train); Churchill’s niece Clarissa (née Spencer-Churchill) the Countess of Avon, aged 94; Mrs Minnie Churchill, who attended Churchill’s lying-in-state, and whose elder son Randolph Churchill is the living heir and great-grandson of Sir Winston Churchill; and one of Churchill’s former nurses, SRN Angela Nicholls, who in 1959, was with Churchill on shipping magnate Aristotle Onassis’s yacht Christina).

Churchill’s Final Farewell: the State and Private Funeral of Sir Winston Churchill, by Rodney J. Croft, is available in Kindle and paperback editions from www.amazon.co.uk.