Two stories highlighting the role of transport are being brought to the fore amid the extensive commemorations of the Great War.

The Belgian town of Poperinge, a military strategic and logistics centre through which passed thousands of troops, is staging displays to tell its many 21st century visitors how it functioned as the nerve centre of operations behind the Western Front.

At the same time, a little remembered by-product of the war – the creation of the forerunner of modern international roll-on, roll-off shipping – has been highlighted by the tourist organisation VisitFlanders.

According to the Flanders Fields Post, a one-off publication by VisitFlanders in the style of newspapers of a century ago, the war led the British to perfect ro-ro train ferries to transport supplies from England to Flanders and France. Large volumes of railway rolling stock, artillery and supplies for the Front were shipped from a “secret port” in Kent.

The port was concealed under the former Roman fortress at Richborough, near Sandwich, having been created by dredging the mouth of the River Stour. According to the history and tourism website Open Sandwich,  large amounts of equipment and arms for the Ypres Salient were despatched from Richborough, using sea-going barges and the very first ro-ro ferries [although the ro-ro technique had been developed on a smaller scale the previous century in Scotland]. 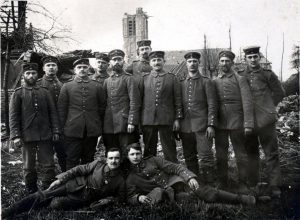 Three train-ferries were built, each with four sets of railway lines on the main deck to allow for up to 54 railway wagons to be shunted directly on and off. It was much easier for train-ferries to move the large, heavy artillery and tanks than to use conventional loading and unloading operations.

At  Poperinge, the gateway to the northern Ypres Salient, the exhibition – Heavy Traffic, railway traffic and other forms of transport in Poperinge 1914-1918 – begins by showing how convoys of heavy road traffic pounded through the cobbled streets.

It explains how trains constantly streamed along railway line 69 with fresh troops, and carried back surviving soldiers on leave, the sick, the wounded and refugees. Dozens of freight trains arrived daily, carrying victuals, military equipment and building materials. The people of Poperinge, a town which the British troops referred to as “Pops, ” watched anxiously as rail wagons ferried coal, sand, wood, stones, tanks, horses, and artillery.

Inside the town’s hospital chapel, the Gasthuiskapel, is a diorama with a scale railway model of the station and representations of more than 600 soldiers, six trains (three of them in motion), munition crates, various buildings, scenes of medical care and even stray dogs. 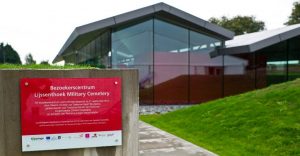 Outdoors, hikers and cyclists can find their way through World War I sites using old railway maps, and a road map accessible by mobile phone app.

The Poperinge exhibition runs until September 5 2015. It is open on Saturdays and Sundays until February 15 from 1pm to 6pm, after which it will be open daily. The diorama is at Gasthuisstraat 1A, Poperinge.

At every turn, statistics relating to World War I make grim reading. Of 600, 000 casualties on Belgian soil, 90% fell in West Flanders. Seeking  to deliver a modern message of peace, many events of commemoration are taking an artistic form, said Karen Roebuck of VisitFlanders during a presentation at the most recent World Travel Market in London. VisitFlanders was a Premier Partner sponsor of the travel business trade fair.

One particularly grim anniversary is that of what happened on April 22 1915. That was the day when in the second battle of Ypres Germany launched the first full-scale gas attack using chlorine. For the rest of the war, both sides used ever more lethal bursts of gas, making for a horrific dawn of modern chemical warfare. There will be centennial commemorations of this sorry date at Ypres and at Langemark, one of four German cemeteries in Flanders.

On July 9 2015, the 30, 000th ceremony of the Last Post will take place. The military bugle call has been played at 8pm at the Menin Gate at Ypres since 1928 by members of the local fire brigade to honour the 54, 896 soldiers and citizens of the Commonwealth listed as missing in action. The exception to this routine was when Ypres was occupied by Germany during World War II, and the ceremony was performed at Brookwood military cemetery, Surrey.

GoneWest (the cultural remembrance programme of West Flanders province) has organised with the Last Post Association and actor Wim Opbrouck (the guiding spirit behind the initiative) ‘A Tribute for the Tribute’ when the 30, 000th Last Post will be sounded. It is hoped that there will be a moment of silence and contemplation in fire stations around the world, and the reading of a commemorative text.

Among many moving stories is that of Nellie Spindler, a 26-year-old nurse who is buried at Lijssenthoek Military Cemetery, the second largest Commonwealth cemetery in Belgium after Tyne Cot, and the site of the biggest evacuation hospital of the era.

Staff nurse Spindler of Queen Alexandra’s Imperial Military Nursing Service was fatally hit by shrapnel when, in an attempt to destroy the nearby rail network, the Germans shelled the area around Brandhoek casualty clearing station on August 21 1917.

The casualty station moved that day to Lijssenthoek, and Nellie was buried there with full military honours as the Last Post sounded over her grave. She was officially described as “killed in action” by the British War Office, and had been on the Western Front only three months. Her grave, in Row A, is marked with a headstone identical in style to those of the fellow male casualties. 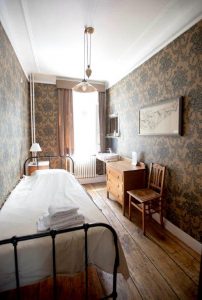 Poperinge, meant to be a rest and recreation centre for soldiers although it came under regular shell fire, is proud of its associations with the Rev Tubby Clayton (1885-1972), founder of Toc H and incumbent of All Hallows Barking by the Tower from 1922-63. Philip Thomas Byard Clayton, nicknamed Tubby from an early age, was born in Australia, but the family moved to England the following year where his father set up a trading company in the City.

The minister spent four years as a curate at St Mary, Portsea, and a few months after the war began became an army chaplain with the British Expeditionary Force on the Western Front. He and another chaplain, the Rev Neville Talbot, turned an 18th century mansion at Poperinge into a rest home for soldiers, naming it Talbot House, as a counter-attraction to the bars and brothels that flourish where weary men are allowed leave.

Their haven for front-line troops, with its Upper Room set aside for worship, formed the basis of the Toc H movement which became Clayton’s life-long work. Toc H is Morse code for the initials of Talbot House, which bore the democratic motto “abandon rank, all ye who enter here.”

Talbot House is now a museum and conference centre and offers overnight accommodation to visitors in a pleasant but less-than-luxury style, as a reminder of the hardships endured by the exhausted soldiers who were pleased to sleep in a real bed there.

Mr Clayton was a chaplain to the Merchant Navy (spending much time with the British tanker fleet), chaplain to George V and VI and Extra Chaplain to Elizabeth II. He combined all these activities with his parish duties, and fund-raising for Toc H.

Raf Craenhals, manager of Talbot House, is organising special events from December 11-15 2015 to mark the centenary of the centre, which has undergone considerable renovations without changing its character.

Huge international interest is being shown in the region’s contribution to marking the war centenary. In 2014, there were 750, 000 visitors to West Flanders, more than double the previous year.

All photos accompanying this article are courtesy of VisitFlanders.