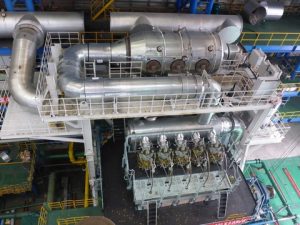 Wärtsilä Corporation, 16 March 2015 at 10 am EET  –  The first Wärtsilä two-stroke engine with a high pressure SCR (Selective Catalytic Reduction) system manufactured in China has been introduced. The system is fitted to a 5-cylinder Wärtsilä RT-flex58T-D 2-stroke, low speed engine produced at the Hudong Heavy Machinery Co Ltd (HHM) facilities. The SCR reactor was also manufactured by HHM. This is the first SCR system that complies with the IMO’s Tier III regulations for engine emissions of nitrogen oxide (NOx).

The Wärtsilä engine with SCR is to be installed in a new 22, 000 dwt multi-purpose vessel currently under construction at the Ouhua shipyard on behalf of China Navigation Co (CNCo). The ship, which is scheduled for delivery in the second quarter of this year, has been designed to allow sufficient space for the fitting of the SCR. This will enable the vessel to comply with the Tier III regulations for NOx control. The SCR system for this application has been jointly developed by HHM and Winterthur Gas & Diesel (WinGD), the joint venture company of Wärtsilä and China State Shipbuilding Company (CSSC), using a basic design concept from Wärtsilä which has been adapted to suit the particular requirements of the engine and ship. Wärtsilä has been producing its high pressure NOx Reducer SCR systems since the late 1990s. The system injects a solution of urea into the exhaust gas flow to react with and eliminate the NOx emissions. It is a high pressure process because the reactor is located between the engine exhaust valves and the turbocharger turbine inlet. This provides the most compact and efficient system without compromising engine performance or impacting fuel consumption. The introduction was made at a ceremony held on 23 January 2015 at the factory of CSSC-MES Diesel (CMD) in Lingang Shanghai where the system was tested. Andrew Stump, Vice President Product Management at WinGD commented: “WinGD is committed to an ongoing testing and improvement programme on all areas of Tier III compliance. This first China produced high pressure SCR is an important milestone among many more to come.” “HHM is very happy to deliver the first 2-stroke high pressure SCR produced in China.  We have been working on development of the SCR with major designers during the past three years and now the cooperation with WinGD shows what is possible. We look forward to continued growth in this market, ” says Zhou Weizhong, Executive Director of R&D Center, Hudong Heavy Machinery. Martin Cresswell, Fleet Director of CNCo, the owner of the vessel where the Wärtsilä engine with SCR is to be fitted, noted that the company will take delivery of 15 new vessels during 2015, all of which will be fitted with Wärtsilä engines manufactured by HHM. “All these vessels are to be fitted with modern Wärtsilä RT-flex engines and are designed to be the most efficient ships of their type and size, ” he added. The test bed trials were approved by Lloyds Register. “These trials show that the technology to produce IMO Tier III compliant engines is actually available and hence give confidence that IMO Tier III certified engines will be ready for January 1, 2016, ” says John Bradshaw, Principal Technical Specialist, Lloyds Register. Winterthur Gas & Diesel Ltd. in brief: Winterthur Gas & Diesel Ltd. (WinGD) is a leading developer of two-stroke low-speed gas and diesel engines used for propulsion power in merchant shipping. WinGD’s target is to set the industry standard for reliability, efficiency, and environmental friendliness. WinGD provides design, licenses and technical support to manufacturers, shipbuilders, and ship operators worldwide. The engines are sold under the Wärtsilä brand name and are manufactured under license in four shipbuilding countries. WinGD has its headquarters in Winterthur, Switzerland, where its activities were founded in 1898, and employs about 350 people worldwide. CSSC in brief: China State Shipbuilding Corporation (CSSC) is a government-owned shipbuilding conglomerate engaged in shipbuilding, ship-repair, shipboard equipment manufacturing, and marine design and research in China. Through subsidiaries CSSC provides tankers, containerships, passenger ferries, self-unloading ships, deck machinery, lifeboats, diesel engines, and anchors. It also builds warships for the Chinese Navy. In addition CSSC exports ships and other products worldwide. Major enterprises include Shanghai Shipbuilding Company, Guangzhou Shipbuilding Company, Jiujiang Shipbuilding Company, and the publicly traded China CSSC Holdings Limited. CSSC was founded in 1999. www.cssc.net.cn/en/ Wärtsilä in brief: Wärtsilä is a global leader in complete lifecycle power solutions for the marine and energy markets. By emphasising technological innovation and total efficiency, Wärtsilä maximizes the environmental and economic performance of the vessels and power plants of its customers. In 2014, Wärtsilä’s net sales totalled EUR 4.8 billion with approximately 17, 700 employees. The company has operations in more than 200 locations in nearly 70 countries around the world. Wärtsilä is listed on the NASDAQ OMX Helsinki, Finland. www.wartsila.com
SCR (Selective Catalytic Reduction) systemWärtsilä CorporationWärtsilä two-stroke engine
0 comment
0
FacebookTwitterLinkedinEmail