Official war artist Eric Ravilious was hugely inspired by the golden light that glows over far northern waters – but the Arctic spelled doom for him in his last posting. He was lost at the age of 39, far too young and at the peak of his achievements, when the plane he was on crashed during a mission from Iceland in September 1942.

Eric Ravilious is one of a generation of 20th century British artists who are receiving renewed attention, and Dulwich Picture Gallery has plucked a gloriously representative selection of his works from galleries and private collections around Britain.

The south London gallery presents an intriguing story from both the inter-war and early war period, during which Ravilious (1903-42) was active. The watercolourist and lithographer was attracted for subject matter in particular to all kinds of machinery, whether new or derelict, whether civilian or military, marine or aviation.

We are told that he was charming, good fun, sometimes a naughty boy, and fundamentally humane. By the time we have gone through the exhibition, we wish that we had had him as a pal. Although not a pacifist, he preferred depicting air-sea rescue planes rather than warplanes.

He was one of the first artists to be offered an official war appointment, and produced some of the most unusual works to come out of World War II.  He spent two and a half years on war assignments before his untimely end. The way he made use of his wartime role was unlike anybody else. Initially he went to Chatham naval dockyard, where he got off to an unpromising start – he was denied in those sensitive times permission to draw an admiral’s bicycle. This reminded him he had to be careful which military hardware he chose as subjects.

Near Chatham he came across the port of Sheerness where he liked the “lovely Regency buildings, almost Venetian in parts, and oh, the still-life of buoys, anchors, chains and wreckage!”

Grimsby and Hull figured in his itinerary, and then came his first overseas mission.  In May 1940 he joined a flotilla ordered to recapture and evacuate the Norwegian port of Narvik.

Ever curious about the mysterious nature of machinery, he spent several weeks on his return to the UK studying the interior and workings of a submarine,  HMS Dolphin. 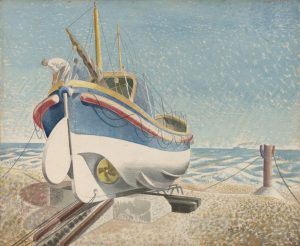 The Lifeboat. 1938. Watercolour and pencil on paper. By Eric Ravilious. Private Collection, on long term loan to Towner, Eastbourne.

The result of this period at Gosport was the remarkable series Submariners at Work (1940-41). A submarine was a difficult place to work both for the crew and for the painter, with all the chaos and noise: his initial paintings of those scenes he rejected as too gloomy, and he found the solution was to embark on a set of lithographs.

His interest in both workaday and technical objects is shown in paintings such as Bomb Defusing Equipment(1941).

He records the eerie Home Security Control Room deep beneath Whitehall, where he showed a woman at a teleprinter (the latest technological communication of the time), women such as these being the unsung heroines of the war.

At Newhaven, he painted the coastal defences. In summer 1941 he was in the port of Dover; then a trip to Dundee and Edinburgh brought him into contact with the aircraft and pilots of the Royal Naval Air Service, prompting him to ask for a transfer to the RAF. Here began a new challenge to paint aeroplanes, and to paint them from the ground.

After some emotional months when his wife gave birth to a daughter and was diagnosed with breast cancer, from which she later recovered, he was offered a posting to an RAF station in Iceland, RAF Kaldadernes. He was to be there only a few days, for when he joined an air-sea rescue mission, but his aircraft disappeared off the Icelandic coast.

He had in 1940 while on the Norway campaign recorded the drama of HMS Ark Royal in Action, while HMS Glorious in the Arctic stemmed from another voyage the same year, when he had picked up on the Arctic light echoing the battleship’s camouflage, and the sun’s great yellow aura.

The gallery’s selection of 90 watercolours, and various lithographs, wood engravings and archive materials, brings out the unity of execution over the years in the work of this unpretentious craftsman.

Born in London, Ravilious was educated in Eastbourne and won a scholarship to the Royal College of Art in 1922. He was a friend of many artists who went on to a distinguished career, including Henry Moore and Barbara Hepworth. He married Eileen Lucy “Tirzah” (a nickname which was a corruption of Tertia, meaning a third child) Garwood, to whom he had taught wood engraving, and the couple moved to rural Essex and had three children. A commercial designer and book illustrator, he had three acclaimed exhibitions of watercolours in the 1930s. 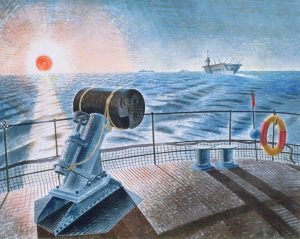 While acknowledged as a fine wood engraver and designer, Ravilious saw himself as primarily a watercolourist. He scorned painting in oil as being like squeezing toothpaste. It ran counter to his insistence on working with meticulous care, which he extended to objects most people would never dream of painting – say, a ship’s funnel or propeller.

On a visit to Le Havre he espied a steam yacht owned by the Rothschild family and described it as “a beauty, the most elegant boat I ever saw, ” but when he came to picture it, his work was called Yellow Funnel – it is the funnel on which he focuses, its smooth cylinder. A metallic object is presented almost as if it were a personality. The 1938 painting in watercolour and pencil is in the exhibition judiciously placed next toSubmarines in Drydock.

Elsewhere he often chose a less than obvious subject – for instance a ship screw on a railway track. To his eye the propeller was massive yet light, delicate but with a sense of presence.

Among the earlier works in the exhibition are abandoned vehicles, lovingly drawn. He clearly enjoyed being by the coast, which resulted in works including Anchor and Boats, Rye (1938) and Paddle Steamers at Night. 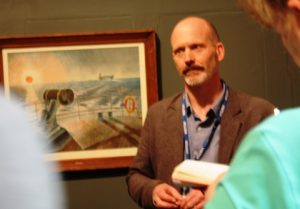 Many other subjects took his watercolour fancy, outdoor scenes exemplified by Westbury Horse showing a famed chalk figure carved into a Wiltshire hill, and Train Landscape (1940); and interiors of a farmhouse where he stayed.
Exhibition curator James Russell said: “I love Ravilious’s playfulness, and the subtle, surreptitious use of distorted geometries in his paintings, and the fact that he made so little public comment about his own work.” James Russell has written an accompanying illustrated full-length study, the first comprehensive review of the watercolours of Ravilious.
The exhibition Ravilious is at Dulwich Picture Gallery until August 31 2015. www.dulwichpicturegallery.org.uk