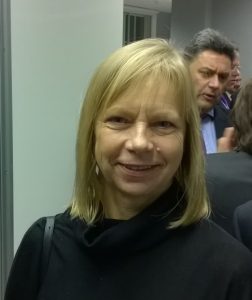 Oslo–) ABS, the leading provider of classification services to the global marine and offshore industries, continued its long-standing support for the AMVER Awards at a ceremony in Oslo on Wednesday 3rd June.

Hosted by The Acting Deputy Chief of Mission of the Embassy of the United States of America, Ms. Carmela Conroy, together with the U.S. Commercial Service, ABS and Applied Weather Technology, the ceremony took place at the US Embassy Residence.

In 2014, 444 ships from 48 Norwegian companies received awards for making themselves available to assist in search and rescue activities anywhere in the world. Eleven Norwegian ships diverted to assist in these operations and saved four lives in 2014.

“ABS is honored to support the AMVER Awards which recognizes the heroic efforts of the companies and crews who go to the assistance of ships and people in distress at sea, ” said Kirsi Tikka, President and Chief Operating Officer, Europe Division, ABS. “It is important that the wider maritime community recognize the significance of their efforts and the contribution that AMVER Members make to the safety of the global maritime community.”

“Volunteering to deviate from your course does not come without a cost. The US Coast Guard is cognizant of this cost and thankful for our partners in the commercial shipping community who have supported AMVER for more than 56 years, ” said Benjamin Strong, AMVER Director. “AMVER ships saved a total of 1, 330 lives in 2014 and whether it is another commercial vessel, a yachtsman or a migrant in peril at sea an AMVER ship is ready and available to assist.

About AMVER
AMVER, sponsored by the United States Coast Guard, is a voluntary global ship reporting system used worldwide by search and rescue authorities to arrange for assistance to persons in distress at sea. On any day there are over 7, 000 ships available to carry out search and rescue services. For more information visit www.amver.com.