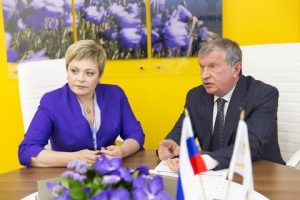 The Supplement Agreement to the Agreement on Cooperation between the Region’s Government and the Company signed on June 21, 2013, pays special attention to the creation of a coastal supply base for Arctic offshore projects, development of scientific potential and human resources of the Murmansk Region.
“Creation of the coastal supply base means the appearance of a new hi-tech sector in the region which is associated with the implementation of one of the prime state tasks –development of the Arctic region and its hydrocarbon resources, ” the Governor emphasized.
In particular, the base will be involved in transfer of offshore technologies and implementation of the state’s plans on phasing out of imports.
“Functioning of the supply base is impossible without highly-qualified personnel. The newly signed Agreement provides for training of profile specialists at local educational institutions and for participation of Rosneft in the development of the regional Center of Arctic Competence and establishment of the Murmansk branch of Arctic Scientific Center for Offshore Development.
According to the Russian government’s order, February 18, 2015 (№243-p) the coastal supply base for offshore projects of Rosneft will be located at the site of the 82 Shiprepair Dockyard (JSC “82 SRZ”, Roslykovo, Murmansk region).
(Source: PORTNEWS Magazine Russia)
Murmansk regionMurmansk Region Governor Marina KovtunRosneftRosneft President Igor SechinRussia
0 comment
0
FacebookTwitterLinkedinEmail