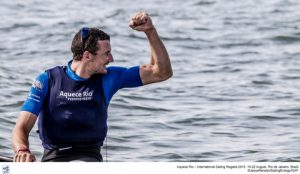 One year before the Olympic Sailing Competition the sailors showed their mettle on the race tracks that will be used at Rio 2016. Many of the test event medallists will win an Olympic medal in one year’s time, highlighting the importance of sailing’s test event.

Sailing, as a sport, depends on a number of factors and relies on the conditions that are prevalent at the time of asking, from wind speed, wind direction, tidal patterns and much more. These can change in an instance and the 326 sailors from 50 nations will walk away with key knowledge, data and lessons learnt as they spend the next 348 days preparing for what is to come.

The Men’s and Women’s 470, Finn and Nacra 17 fleets drew the competition to a close on the Pão de Açúcar race track. With Christ the Redeemer looking over the racing area and Sugarloaf Mountain standing tall the sailors enjoyed another southerly breeze ranging from 8-12 knots ensuring great racing. 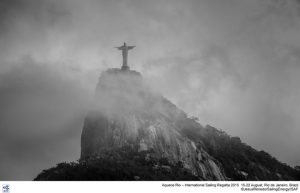 Australia’s Jason Waterhouse and Lisa Darmanin claimed gold in the Nacra 17 with a complete performance across the 12 race series.

The Australians finished every race within the top eight and their consistency proved to be invaluable as they won over France’s Billy Besson and Marie Riou by five points.

“This has been a really tricky week and we are super stoked, ” said Waterhouse through a beaming smile.“I’m so proud of my cousin Lisa and we’ve been working to do this together for about eight years now and there’s one more goal in mind and that’s where we are heading. This is just an awesome way to end it with one year to go.”

Waterhouse and Darmanin’s multihull sailing partnership stems from the days they competed together at the ISAF Youth Sailing World Championship, an event they won in 2009 on Brazilian waters. Six years on and there’s another gold medal on offer in Brazil that they have their sights set on,  “It’s great to win this week but we want to be winning in 348 days’ time, ” commented Darmanin. “Every one of those days is going to count and we’re just going to keep working really hard to make sure we will be there then. 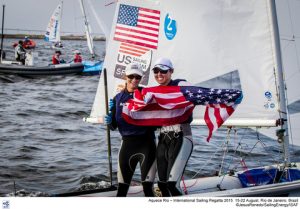 “We got second at the world’s this year which we were really thrilled with but we really wanted to bring home gold here on the Olympic waters. This is our first time racing in Rio and we’ve taken to it well. It’s a pretty tricky place but we’re going to be back.”

Austria’s Thomas Zajac and Tanja Frank claimed a convincing Medal Race victory leading from start to finish but the performance of the day came from Billy Besson and Marie Riou (FRA). Over the startline as the race commenced the French duo had to get turn back with the Kiwi and German teams as their rivals gained an early advantage.

The French pair pressed hard and came through in second which handed them silver. A ninth from Mandy Mulder and Coen de Koning (NED) relegated them from second to third whilst Paul Kohlhoff and Carolina Werner (GER) missed out on bronze by a single point. 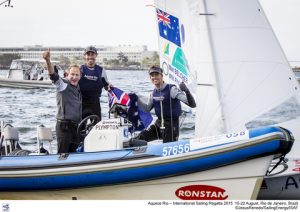 It was every man for himself in the Men’s 470 with minimal separation between the top five sailors heading into the Medal Race.

The advantage was in the hands of Sime Fantela and Igor Marenic (CRO) but the leading teams all had a shot at gold. Every team stuck to their own plan and it was Australia’s Mat Belcher and Will Ryan who came out on top to take a second Olympic test event gold.

Throughout the race the gold medal could have gone a number of ways. Sofian Bouvet and Jeremie Mion (FRA) put themselves in the driving seat by grabbing the lead and maintaining it to the finish. Belcher and Ryan knew what had to be done and managed to push ahead, obtaining some daylight between themselves and the rest of the fleet in second.

Pushed hard by Switzerland’s Yannick Brauchli and Romuald Hausser, the Australians maintained their spot and as they came through in second, they watched the Croatians come through in eighth which handed them gold.

“This is a really good stepping stone for us, ” said Belcher. “We had a really tough regatta in the beginning. We felt we were sailing really well and the disqualification halfway through put a lot of pressure on Will and I. It was nice that we were able to overcome that and come away with a win. There’s a lot of work to do but we’re pretty happy with how we’re going.

Ryan added,  “We’re really happy with how it’s going and hopefully in one year’s time we can repeat what we did today.”

A French race victory promoted them to silver whilst Fantela and Marenic picked up bronze, finishing a single point ahead of Onan Barreiros and Juan Curbelo Cabrera (ESP).

Anne Haeger and Briana Provancha (USA) claimed gold in the Women’s 470 after overnight leaders Hannah Mills and Saskia Clark (GBR) were penalised on the race track.

The advantage belonged to the Brits going into the race but they had to do penalty turns on the race track and they slipped to the back of the pack where they remained through the duration of race.

The Americans finished fourth in the Medal Race, enough for them to seal gold by seven points over the Brits.

“It was awesome, ” Provancha expressed as she began to describe the Medal Race. “We were really trying not to be over the line. Luckily for us the British got themselves in a bit of a situation early on in the race and it put them quite far behind. From there we were in defence mode and things worked out well for us.”

Haeger and Provancha have always been in the mix for medals in the Women’s 470 and in many cases it’s been close, but no cigar. That phrase has been eradicated from their name now and Haeger was beaming with joy on Flamengo Beach at the conclusion of the day,  “A takeaway is that we can actually do it. This is our first major regatta win and I’m so proud of her [Briana] so it’s within our grasp and we can hopefully come back next year and do the exact same thing.

“[The level in the Women’s 470] is getting higher, higher and higher and that’s why this win kind of solidifies it for us that we are right up there. Even though people are taking steps we’re right there with them. It’s an exciting time.”

New Zealand’s Jo Aleh and Polly Powrie held on to bronze with a Medal Race second.

Giles Scott (GBR) made it two test event victories out of two in the Finn as he extended his unbeaten run.

Going into the Medal Race there was minimal separation between the top sailors. Pieter Jan Postma (NED) held the lead but only had a one point advantage over Scott. Tapio Nirkko (FIN) and Jonathan Lobert (FRA) were also in touch and in with a shot.

Tension was high in the build-up and during the race and as Scott said himself, “it was a stressful one.

“PJ [Postma] fired off left down the first run and caught up a lot. He took the other gate and then got a decent shift to get right back to a boat length behind me. At the same time the Finnish guy was on the left and it was a very hard race to manage but I managed it somehow.”

Scott finished in fourth which gave him gold whilst a second for Nirkko pushed him into silver.

Postma had led the event from the opening day but dropped to third after an eighth and looked visually gutted ashore after racing,  “So we just did the test event 2015. I just finished in bronze, ” sighed Postma as he paused for thought,  “It was an exciting week. It was good racing and a good fight. Also today on the Medal Race it was a great fight.

“I think I’m on a good road, a good road up but today was a little bit tough for me as I lost first and went into third. In the race I think the left was paying. I started left from Giles but then I lost some speed and I couldn’t hold a lane and that was a bit of a problem. I had to tack away so it wasn’t a good first upwind. I had a nice downwind. On the second beat we came close together, only a few metres apart but on the downwind we were only two boat lengths apart and Giles had a bit more speed so he won.

“Positives? I qualified [for the Olympic team] as I finished in the top three here. I wanted a top three and I did it. So that’s in the pocket. We’ll do some more training, qualify the country in Takapuna but let’s not forget we sailed a good regatta here with all the Finn sailors and I’m thankful to be here.”

The Medal Race bullet was picked up by Josh Junior (NZL) who finished fifth overall.

The countdown to the Rio 2016 Olympic Games is now fully on. In 348 days, 380 sailors will do battle for the ultimate honour within the sport, an Olympic gold medal.