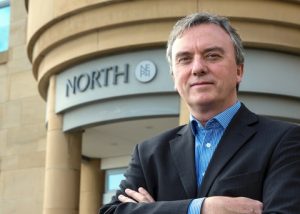 Tom Rutter has been appointed chief executive officer of North P&I Club’s subsidiary Sunderland Marine, a leading international insurer of fishing vessels, small craft and aquaculture risks. He succeeds Geoff Parkinson, who retired in June this year after 19 years at the helm. Parkinson played a major role in negotiating Sunderland Marine’s acquisition by the 170 million GT ‘A’ rated North in February 2014.

Rutter (55) has been with Sunderland Marine for over 35 years, having joined as a claims assistant in 1979. He later moved into marine underwriting and in 1992 transferred to the aquaculture department. He rose to become an associate director, later a director, and the department’s managing director in 2010.

According to North’s joint managing director Alan Wilson, ‘Tom has extensive international experience in all aspects of hull, P&I and aquaculture insurance, so we are delighted to confirm his appointment in this critically important role. Sunderland Marine is now fully integrated with North’s operations and Tom will play a key part in building on the synergy of our combined businesses over the coming years.’

North’s joint managing director Paul Jennings says, ‘Tom is a worthy successor to Geoff Parkinson, who during his 43 years with Sunderland Marine achieved a great deal in making the business the market leader it is today. With the full support of North, I am confident Tom will continue to build on Sunderland Marine’s worldwide reputation for service, security and strength.’

Rutter is internationally renowned in the aquaculture insurance industry. He has represented client interests lecturing at events sponsored by the Food and Agriculture Organization of the United Nations, The Organisation for Economic Co-operation and Development (OECD) and the Canadian Aquaculture Industry Alliance.

Commenting on his appointment he says, ‘I am grateful for this opportunity and for the unrivalled expertise and support of my colleagues, who have been and continue to be central to the successful development of the company. I would also like to thank my predecessor Geoff Parkinson for his guidance and encouragement over the years. I look forward to leading Sunderland Marine as a key part of North’s global business.’

North is a leading global marine insurer providing P&I, FD&D, war risks and ancillary insurance to 127 million GT of owned tonnage on a mutual basis and 43 million GT of chartered tonnage. Through its guaranteed subsidiary Sunderland Marine, North is also a leading insurer of fishing vessels, small craft and aquaculture risks. The ‘A’ rated Club is based in Newcastle upon Tyne, UK with regional offices in Greece, Hong Kong, Japan and Singapore and Sunderland Marine offices worldwide. North is a leading member of the International Group of P&I Clubs (IG), with 11.6% of the IG’s owned tonnage. The 13 IG clubs provide liability cover for approximately 90% of the world’s ocean-going tonnage and, as a member of the IG, North protects and promotes the interests of the international shipping industry.

Time to shut down laptop thefts