Cool Logistics Global 2015 reveals the paradox of the missing link

LONDON, 08.10.2015 – Increasing demand for smaller food consignments seems strangely at odds with the deployment of ever-larger container vessels across the globe. But who is benefitting from the widening logistics gap between container / truck loads and individually wrapped pizza packs delivered straight to your doorstep?

This was one of the key questions participants were left with at the 7th annual Cool Logistics Global Conference in Bruges, hosted by the Port of Zeebrugge on 29 September – 1 October 2015.
Three days of action-packed information – covering everything from global food and demand forecasts and consumer / retail trends, to the world reefer shipping outlook, through innovative distribution and storage concepts for the first and last mile, to new transport, storage and packaging technologies – mark out Cool Logistics Global as the only conference covering all the nooks and crannies of the global perishable supply chain.
Breaking news at this year’s event included the official unveiling of Maersk Line’s real-time remote monitoring implementation strategy for its 290, 000-strong reefer container fleet, the launch by Thermo King of R-513a refrigerant as a drop-in replacement for R-134 and the presentation of futuristic technologies such as proton vibration alignment.
As a thought-provoking introduction to the conference, Zespri had invited a group of visitors to a rare demonstration of kiwifruit handling and packaging practice at the fruit packing station in Zeebrugge. The company revealed that its spoilage rate is as low as 0.8%. 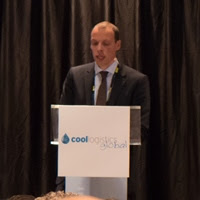 The container lines are wary of shipping reefer containers to inland destinations, but the internet-driven culture of convenience is pushing the last mile logistics sector to deliver perishable products ‘through’ ever-narrower delivery windows.
Patently the only reason why pizzas are not yet being posted right through the letterbox is the lack of refrigeration on the doormat!
As Paul Bosch, food and agriculture supply chain analyst at Rabobank, said on the first day of the conference, ‘consumers don’t want to wait and don’t want to pay extra’.
Probably the most startling announcement at Cool Logistics Global this year was made by Carlos Rodriguez, Partner and President of Agro Merchants Group on the third day. Backed by 100 billion USD Oaktree Capital fund, Agro Merchants demonstrated the principle of perishable value migration by continuing to develop its network of global coldstore operations from Europe and Latin Americas to the Middle East, Australia and the Far East. By 2017 the company intends to invest 500 million USD per annum. Yet most of the cash will be directed towards emerging markets.
What is driving this expansion?
According to USDA – Foreign Agriculture Services & Business Monitor International 2015, global refrigerated transport grew 3.7% CAGR between 2005 and 2014. In emerging markets the market was up 5.4% with developed markets chugging along with 0.7% growth. Overall the market will see a forecast growth of 7.4%. 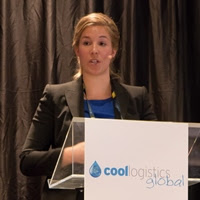 This should please European perishable produce exporters such as Wiskerke Onions, San Lucar Fruit, Marine Harvest and all those companies seeking out the shortest and most effective routes to conquer emerging markets. The necessity for exporters to develop new markets was brought home by flat-lining demand for primary perishables in Europe and the impact of Russia’s continuing food import ban.

According to Rabobank, the biggest jump between 2015 and 2020 will be in frozen and chilled processed, i.e. packaged food, with the Asia Pacific region predicted to suck in most of the expanding seafood business. Rabobank sees a bright future for frozen vegetables, a speciality of Dutch and Belgian vegetable producers, particularly those in the Roeselare region.
Fresh fruits and vegetables are set to grow only modestly, as mentioned by Rabobank. (There has even been a decline in fresh produce consumption in Europe, as mentioned at the recent sister event Cool Logistics Asia in Hong Kong).
Food for thought 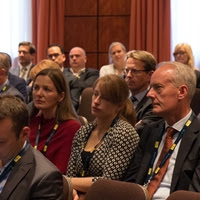 Most Cool Logistics delegates were struck by the UK-based Overseas Development Institute’s revelation that there might indeed be a link between the global obesity crisis and the growing price gap between ‘healthy’ fresh produce and processed foods. Have fruit and vegetables become ‘inconvenient guests’ at our dinner tables compared with hamburgers?
There are clear indications that remaining inefficiencies in global perishable supply chains have a part to play here, a factor epitomised by its persistent fragmentation and lack of communication between the different actors within the perishable supply chain.
With between 30 to 40 % of perishables being wasted due to supply chain failures, it is perhaps not surprising that one of the fastest growing industry sectors is packaging.
Whilst NFT Tilbury predicts that the UK retail logistics could become ‘even more brutal’ in the future, it is not waiting and hopes to complete its new 25, 000-pallet fulfilment centre with an entire floor dedicated to ‘reworking and repacking operations’.
Perhaps this should be read as a signal to bigger food ports to look beyond trying to attract bigger vessels and develop specific logistics solutions in the future.

Dwell times in ports are becoming a big issue, delegates were told. The situation may not be as drastic at Jeddah, where San Lucar had to wait 19 days before its container could be released. Pointing the finger at the UK government, Nigel Jenney, CEO of Fresh Produce Consortium, mentioned a 5 day dwell time in some UK ports, largely due to inefficient food inspection regimes. Clearly one of the worst cases affecting RORO and Channel Tunnel operations this year has been the situation in Calais. According to Jenney, this year the UK fresh produce industry has been faced with losses of between 15 – 20 million GBP, as a result of the European refugee crisis. 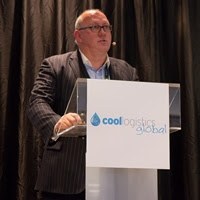 Not surprisingly perishable logistics service providers and ocean carriers are now exploring prospects for new ‘perishable’ commodities such as pharmaceuticals. Derek O’Galligan, Director of reefer trades at OOCL, revealed that shipping companies, freight forwarders, ports and truckers have created a working group to develop standards for the transportation of temperature controlled pharmaceuticals by sea. The volumes of pharmaceuticals currently shipped by sea are minimal. However, the value is potentially immense. A reefer container with insulin can have a cargo value of over 10 million USD. One of the drivers behind the migration of pharmaceuticals from airfreight to seafreight is the EU guidelines for the Good Distribution Practice (GDP) of medicinal products.
The announcement by Maersk that its entire reefer box fleet of 290, 000 units has now been equipped with remote reefer monitoring technology from AT&T could in theory unlock new types of high value cargo to be shipped by sea in the future.
The new RCM system has also been rolled out across over 300 container terminals which have been locked with a geofence system, and also cover over 370 ships equipped with VSAT.
According to Mike Troiano, Vice President at AT&T, the new system will not only allow Maersk to remotely manage the reefer containers, provide customised alerts, as well as maintain pre-trip and post reports, but also, critically, monitor the mechanical performance of the boxes.
The news was welcomed by the shipper community at Cool Logistics Global this year. Armando Larragan of Compagnie Fruitière considered this to be a very important step forward in eventually providing shippers with end-to-end visibility.
Clouds with a silver lining?
Investment in new supporting reefer technology could eventually allow carriers to differentiate themselves more in the future and deflect from the suicidal rate wars between them. Chris Swarts, Director of Global Transportation and Logistics at AJC, one of the largest protein shippers, poignantly remarked in the ocean freight debate that service levels had deteriorated: ‘rates are irrelevant. I expect good service, whatever’. 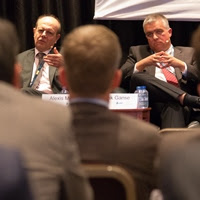 According to Alexis Michel of CMA CGM, reefer containership capacity is set to increase by nearly 20% between mid-2015 and 2018, with reefer box transshipment becoming the new normal. One of the side-effects of container ship capacity expansion is that rate volatility is threatening to engulf reefer rates further for the time being. Michel also sees new alliances on the horizon on the South-North Trades.

As Frank Ganse, Global Director of Reefer Logistics at Kuehne + Nagel, mentioned, 2014 / 2015 has been the first period in years where there has been a slight surplus in reefer container equipment. ‘In the past we could not get any reefer equipment during the summer hemisphere fruit season. Now we don’t have any problems, ‘ he said. However, this view is not shared by everybody. Some carriers and freight forwarders still claim that the industry is plagued by sporadic reefer container shortage.
If the Transatlantic Trade Agreement between Europe and the USA gets underway, there could be ‘some crowding out of Latin American meat products on EU markets, with chicken from USA likely to crowd out poultry from Brazil or Thailand’, stated Professor Gabriel Felbermayr, Director of the Munich-based IFO Center for International Economics.
Although the Russian food import ban has had a huge impact, ‘the pain will fade’, Rabobank predicted. 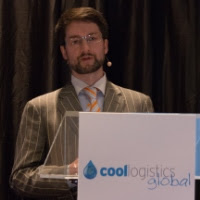 As Alexander Kapitonov, Commercial Director of Moscow-based Procontainer, pointed out, new reefer supply chains are in the process of being developed between Russia, Uzbekistan, Kazakhstan and the Caucasus. The Russian Government has put forward a programme for import substitution. This is to make up for the massive drop in poultry, seafood and red meat imports, and a long term programme for developing the country’s agricultural sector. This will be accompanied by various new logistics projects, including the development of a new free port in Vladivostok, expansion of the New Silk Road between Beijing and Moscow and a ‘slow development of reefer infrastructure, including cold stores.’