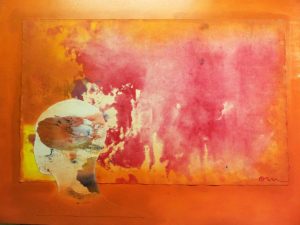 All things to be seen inside you. Mixed media. By Om Barbarà.

Barcelona artist Om Barbarà felt instantly at home as he set up his first London solo exhibition in the Indian cultural centre, the Bhavan, in West Kensington.

Om – his name, unusual in Europe, was chosen by his parents and is of sacred origin in India – pursues in his work the need to recognise as he sees it the importance and vitality of the soul.

He immediately sensed the spiritual element represented by the Bhavan Art Gallery, which was furthered by learning of the closeness of the Catalan word for soul, which is anima, and the Spanish word alma, with the Hindi word ātmā. 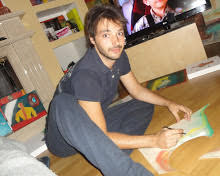 The Bhavan describes its fundamental purpose as “to preserve for the posterity the unsurpassed and indisputable beauty of Indian culture, art and heritage.” This resonated with the Catalan artist’s quest for “a philosophy to know life applied to art.”

Om’s large mixed media canvases pit the soul against the often unthinking reactions to daily life of the head. They are painted with utter conviction and bear such titles as Head with Flames against the reality of following your heart, The soul never dies,  and All things to be seen inside you.

His bold style is a part of his articulate exposition of his philosophy, which he encapsulated in 2006 in his book the English title of which is The Philosophy of the Soul. That was the year he gained a degree in public relations and advertising at Ramon Llull University, Barcelona. He entered the world of advertising but preferred to pour his design talents into his distinctive art work. That work is aimed at uncovering “a new consciousness for human beings, step by step, heart to heart.” 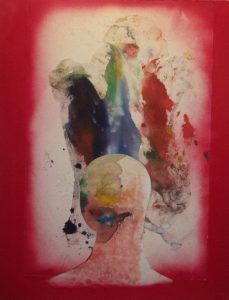 The human being should be on a path to consciousness of “its own being.” He expresses this imperative “through vivid colors and my own imagination” as his work evolves towards metaphysics, poetry, reflections and spirituality.

The Bhavan exhibition, on October 7 and 8 2015, was his second appearance in London. The first was participation in a group exhibition in Brick Lane Gallery in March 2013. His other successes have included participation at the huge Barcelona Showcase event, and shows in Madrid, and at Palafrugell on the Costa Brava.

Om comes from an artistic family and his most moving experience in that sense was the exhibition and concert he staged in December 2013 in a restaurant in Sabadell, 20km from Barcelona, as homage to his grandfather Joan Barbarà, who had died recently.

Born in 1927, Joan Barbarà was a painter and lithographer (both skills are followed today by Om) who showed his work in Barcelona, elsewhere in Spain, and in Italy, France, Germany and Belgium. His first exhibition was in Barcelona in 1957, after which he moved to Paris for a period. He was a member of the Catalan Royal Academyof Fine Arts of Sant Jordi.

Head with flames against the reality of following your heart. Mixed media.
By Om Barbarà.

In remember to my Master Grandfather Joan BarbaraJoan Barbarà was an acquaintance and friend of many of the great artists of the period, including Joan Miró, Joseph Beuys, Marc Chagall, Eduardo Chillida, Miquel Barceló, Pablo Picasso, Salvador Dalí and Antoni Tàpies.

Om remains in awe of his mentor and guru grandfather, recognising how much he owes to his inspiration. Now Om’s solo debut in London has brought him a new audience and admirers for his own original output. 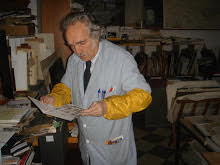 Cool Logistics Global 2015 reveals the paradox of the missing link