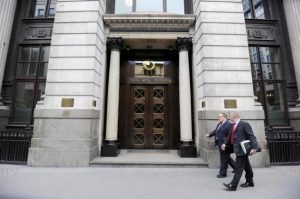 by Jonathan Saul and Pratima Desai  of Thomson Reuters

The London Metal Exchange has made an informal approach to the Baltic Exchange, the hub of the global shipping market, to acquire the entire business, two sources familiar with the matter told Reuters.

The LME – previously owned by its members – was itself bought by Hong Kong Exchanges and Clearing (HKEx) in 2012 for $2.2 billion.

If such a deal were agreed, it would assist the LME in expanding its reach beyond metals.

“It’s an informal approach, ” one source said, adding that a potential offer could be based on three times the net asset value of the London-based Baltic Exchange.

“The LME has made strong overtures to the Baltic, ” the second source said.

Further details were not available, although any offer was likely to be made in cash.

In the Baltic’s last annual report in the year to end-March 2015 published in June, shareholders’ funds were 28.036 million pounds ($43 million). The number of allotted and fully paid ordinary shares totaled 483, 860.

Baltic Exchange Chief Executive Jeremy Penn told Reuters: “We would never comment in any way on anything of that nature whether it was true or untrue.”

This is the third time the LME, the world’s biggest marketplace for trading base metals, has approached the privately owned Baltic Exchange.

The Baltic, founded in 1744, had previously rebuffed separate approaches from the LME. The first was an LME-proposed joint venture in 2010 to launch an exchange for freight derivatives trading.

In 2013, sources familiar with the matter told Reuters the Baltic had received expressions of interest from the LME and other suitors for its freight derivatives platform Baltex, launched in 2011.

Those previous approaches by the LME ran into opposition from ship brokers who are members and shareholders of the Baltic.

Sources said the LME would need to convince the Baltic’s board and wider shareholders with a detailed firm proposal, especially given fears by brokers on losing control over the way the Baltic conducts business.

“The (freight) brokers will need to be won over, ” the first source said.

The LME, formally established in 1877, is the world’s oldest and biggest market for trading industrial metals. Its settlement prices are used as benchmarks by producers and consumers of industrial metals such as copper and aluminum.

Despite its name, the Baltic Exchange is no longer the forum for trade in the chartering of vessels. It produces daily benchmark rates and indices that are used to trade and settle freight contracts as well as data used in the freight derivatives or FFA market, which allow investors to take positions on freight rates in the future.

In 2011, the Baltic – via a wholly owned subsidiary – launched the first central FFA platform, called Baltex.

Baltex has gained momentum after becoming a venue for presenting block futures at the start of December last year. Since the start of 2015, Baltex reached break-even after previous losses, which is another added plus for the LME.

CEO Penn announced last month he will step down in 2016 after more than 12 years running the institution, with a successor being sought by the Baltic.

Penn told Reuters in June the Baltic was studying a potential foray into commodities and was open to proposals on tie-ups as other exchanges attempt to boost volumes.

The Baltic said in September, in a letter to shareholders, that it would pay an interim dividend of 20 pounds per share. A total of 9.7 million pounds would be distributed to the company’s 380 shareholders.

Explaining part of the reason for the record dividend, Baltic Chairman Guy Campbell said the responsibility for managing a large portfolio of investments was “not one it is appropriate for your board to continue to take on when it cannot foresee a need to make use of the funds in the near future”.

In the year to end-March 2015, the market value of its investments was 19.9 million pounds. The Baltic also owns the building it occupies in the City of London, which its report states was worth 16 million pounds when last valued in 2013.