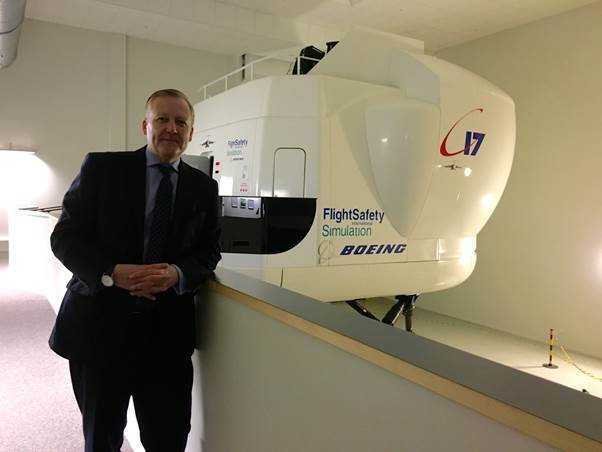 Kevan Jones at the International Training centre in Farnborough

Kevan Jones, Shadow Defence Minister and Member of Parliament for North Durham, has continued his Industry and Parliament Trust (IPT) Fellowship by visiting Boeing’s bases in Farnborough and Fleet on the 19th November.

During the visit, Mr Jones was shown around Boeing’s International Training Centre (ITC) and was given an overview of site operations. He was also taken around the Boeing Portal facility, which uses advanced technologies to analyse, produce and model robust structured and defensible scenarios to develop evidence for key decision makers.

Mr Jones is currently undertaking a Fellowship with the IPT in order gain a greater understanding of the aerospace sector. The highlight of the visit was spending time in Boeing’s simulator at the ITC where he was able to ‘fly’ the Boeing C-17 Globemaster III. The Royal Air Force (RAF) has eight of this aircraft in its fleet with more than 200 in service around the world.

In addition to this visit, the Shadow Defence Minister will be travelling to Boeing’s Gosport site to gain a deeper understanding of the organisation’s UK based operations, especially in support of the RAF’s Boeing Chinook fleet, in the New Year.

“I am very pleased to be here at Boeing today to see both the Portal and the International Training Centre. I am over half way through my IPT Fellowship and I have visited some very interesting organisations so far, and today was no exception. I am looking forward to visiting Boeing again in the New Year to find out more about their UK based operations in support of the RAF’s Chinook.”

“Kevan was very enthusiastic about the work we do here and we were delighted to host the Shadow Defence Minister today. At Boeing, we are very keen to maintain a healthy dialogue with all Parliamentarians and this visit has helped to cement that relationship. I look forward to engaging further with the IPT’s Fellowship Programme so that we can continue to bring Parliamentarians and industry closer together.”