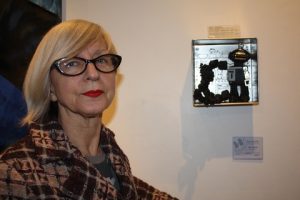 Bettina Schroeder with her work Tac-Trans.

Robots have taken over the world – the world, that is, of one of London’s most endearing commercial art galleries.

Their conquest of the A & D Gallery in Chiltern Street, Marylebone, assumes the form of an exhibition entitled Robots Lift Art: Toy Robots and Man-Made Art. It is a charming reminder for robot enthusiasts of their playroom hours, and a revelation for other adults of how these small objects have become eminently collectable and often valuable. 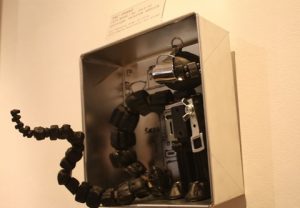 Gallery co-owner Daniel Brant has put together a miscellany of robot toys, robot paintings and mixed media work, interspersed with bold contemporary paintings by some of the favourite artists of the salon.

Staring from glass cabinets are lots of goggle-eyed tin robots (many with the value-enhancing original cardboard boxes) that are for sale, and there is even a robot-design T shirt.

Daniel began buying mechanical manpower in 1978 for his son, touring toy fairs all over the country and in France. The collection grew to number some 200. “We had fun collecting them, ” said Daniel.  “Sculpturally they are beautiful. But lately I have had some extra dental bills, so I decided to sell them to help cover the costs.  I thought of calling this exhibition Robots versus Teeth, but that sounded too complicated.” 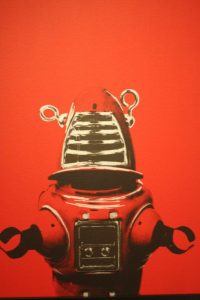 He is particularly fond of the pictures on the walls of Robbie “my idol, ” one of the most popular models over the decades. Robbie is here portrayed in silkscreen works on canvas by Kevin Rowley, whose main business is making by hand children’s shoes in his workshop in Brighton. Kevin trained in the footwear industry, and when he took a Fine Art MA course in London, went back to his shoe skills to support his studies. His robot canvases capture the combination of friendly subservience and slight menace of the miniature machines.

Bettina’s brainchild has a practical and determinedly humane role. The ‘trans’ is the transit element and includes “vacation services – you are looked after where you go, but while you are there, he will look after your home and what you have left behind: your animals, your cleaning and washing.”

The robot’s tail “has an operating range of the earth’s circumference, 40, 075 km, ” and there is a “shift-shaping penetration” of 86% of the global field: “it can shift-shape through walls, rocks or whatever but not through the earth’s core because that is too hot.”

Bettina’s model is programmed solely for affirmative economic activity such as manufacturing, ruling out martial operations. “If you purchase this you have to sign a contract that it will not be used for military purposes, only for humanitarian purposes. He is not designed to do harm.” 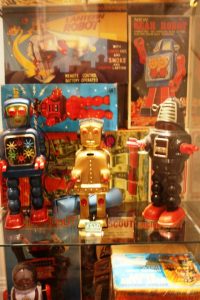 He? “There is a female version I am designing, which is still in the pipeline.  She is made from glass, see-through so that the inner workings are visible.” It is noteworthy, says Bettina, how historically robots have been constructed to have prominent heads.

The German-born artist has lived in London for many years and her innovative artistic creations attract much attention. Influenced by political developments and the details of everyday life, she makes ingenious transformations of common materials.  In recent times, she has knitted sculptures from discarded carrier bags as a comment on the ‘throw-away society’ and the over-exploitation of natural resources.

The A & D Gallery initiative coincides with revived interest in robots as toys, and the even mightier rise of industrial and military applications.

Having deployed huge amounts of drones against targets in the Middle East and Asia, US businesses and policymakers foresee a big future for robotic weapons.

The newly-formed Foundation for Responsible Robotics has warned of the impact of this type of technology on jobs and human rights, and the potential misuse by terrorists. The International Federation of Robotics (which represents organisations in more than 15 countries and underlines the beneficial side of advances) says there has been an “explosive growth” in sales, with 2016 likely to be another record year. It said that robots in defence applications accounted for 45% of the total number of service robots for professional use sold in 2014. China in 2013 had become the biggest robot market with a share of 20% of the total supply.

The federation cited a 2011 report by the market research firm Metra Martech saying that robotics will be a major driver for global job creation, claiming that 1m industrial robots currently in operation have been directly responsible for the creation of close to 3m jobs.

While some toys of 1950s-onwards vintage have sold for a few dollars, others have realised thousands. 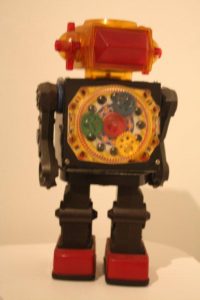 Dabbling in artificial intelligence has a long history: some experts claim that there were toy robots in ancient Greece. Later, Leonardo da Vinci drafted designs for an automaton called a “mechanical knight.”

In the 1800s, a craftsman in Japan is said to have created models that could write, fire arrows, and serve tea. Towards the end of that century, Japanese factories simplified toy designs used by German industry, and by around 1918 led the market.

Soon afterwards, the term robot was conceived by the Czech author, Karel Capek, based on the word robota, which in several Slavic languages means “work.” After World War II, the US encouraged Japan to take up manufacture using recycled tin: much of the domestic metal supply had been contaminated by radiation from the atom bombs dropped on Hiroshima and Nagasaki.

Japan brilliantly turned its then low labour cost advantage into a source of high-profits, boosted when it devised battery-powered robots in the mid-1950s. Robby the Robot, a character in the 1956 science fiction film Forbidden Planet, a follow-up to Robbie the Robot of earlier stories, was in great demand and went on to have many tin incarnations.

Evident from its current selection on display, A & D Gallery has a vibrant interest in Pop Art and Urban Art. Particularly compelling is an abstract work of intense colour by Nathlyn Baptiste, whose east London studio is near the main site of the 2012 Olympics, an event which has been among her great inspirations. Nathlyn’s work has been praised often by some of the UK’s leading contemporary artists.

Female triumvirate in power in 2016, OMFIF advisory board predicts