Southampton, 10  March 2016 – Six celebrities are swapping the comforts of the studio for five days at sea, as they attempt to sail around the UK on the BT Sport Relief Challenge: Hell on High Seas, have been prepared for the challenge at the National Maritime College of Ireland (NMCI).
Captained by Ian Walker, the first British skipper to win the Volvo Ocean Race, the crew consists of BBC1’s The One Show presenter Alex Jones, Angellica Bell, Hal Cruttenden, Doon Mackichan, Ore Oduba and Suzi Perry. They set off from Belfast Harbour on Monday and are due to arrive in London on Friday. The original plan to end the voyage in North Shields had to be abandoned when storm force winds of 35 forced the boat to take shelter in Plymouth Tuesday evening until this morning (Thursday) when conditions improved.

In a live broadcast on The One Show Tuesday evening, presenter Alex Jones was ecstatic to learn that the Challenge had already raised over £350, 000 on Day One. “It’s an extremely, extremely dangerous challenge, ” she said. “I think we all felt like jumping into the sea and letting the helicopter come and rescue us!”

Ahead of their challenge, the celebrities arrived at the NMCI’s $100m facility in Ringaskiddy, Co Cork, last week where they were thrown in at the deep end for hands-on training in the College’s survival pool with simulated storms, thunder and lightning. The pool, complete with a Helicopter Underwater Dunker, and other facilities including the latest simulator technology, are key in the College’s ability to deliver academic and commercial courses to its port, shipping and petrochemical client base. 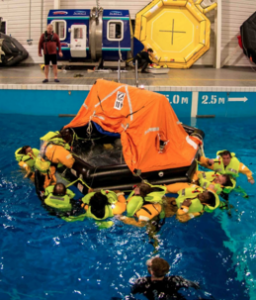 GAC and the NMCI joined forces in 2010 to form GAC Training & Service Solutions (GTSS), with the aim of providing top-notch maritime training for GAC’s global client base.

Andrew Pindar OBE, Principal of GAC Pindar, says: “The GTSS service is now available to the sail racing and leisure community through GAC Pindar, the specialist marine sport, leisure and events arm of the GAC Group. There’s no finer way to launch that extension of the service than in support of these mad members of the BT Sport Relief Challenge: Hell on High Seas crew. We salute their bravery and efforts to raise money that will help transform the lives of some of the most disadvantaged people in the UK and across the world’s poorest communities.”

NMCI director Conor Mowlds adds: “The open-water survival and fire-fighting techniques the celebrities learned at the NMCI really could save their lives in the event of an emergency this week. We were delighted to put our facilities at their disposal – it’s great exposure for Cork and for Ireland’s maritime college.”

The sailors will live on vacuum-packed food whilst battling fearsome winds, freezing temperatures and rough seas in four-hour watch shifts, just like the 2014-15 Volvo Ocean Race teams did earlier this year. The Volvo Ocean 65 yacht provided for the challenge was sailed around the world by the Dongfeng Race Team and is no stranger to GAC Pindar, which was the official logistics partner for the Race. In that capacity, GAC Pindar helped get the Dongfeng team back in the Race after their mast broke over 2000 nautical miles from their next stopover in Itajaí in Brazil. GAC Pindar had just 20 days to deliver the 28.6 metre $345, 000 dollar replacement mast enabling the team to rejoin the race for the next leg to Newport, USA. It was delivered by specially designed Boing 747 cargo planes and an oversized truck two days ahead of schedule, allowing the Dongfeng team to finish the race and achieve podium position in the overall leaderboard.

The BT Sport Relief Challenge: Hell on High Seas can be followed with live updates on The One Show, every day from 7pm, or online. To support them, go tosportrelief.com/highseas.

About GAC GroupGAC is a global provider of integrated shipping, logistics and marine services. Emphasising world-class performance, a long-term approach, innovation, ethics and a strong human touch, GAC delivers a flexible and value-adding portfolio to help customers achieve their strategic goals.Established since 1956, GAC employs over 9, 000 people in more than 300 offices worldwide.Sign up for GAC’s free HOT PORT NEWS email for daily updates from ports around the world and RED HOT PORT NEWS for free SMS alerts of breaking news atwww.gac.com/hpn.
Follow GAC Group on Facebook at www.facebook.com/GACGroup, LinkedIn atwww.linkedin.com/company/gac-group and Google+ at https://plus.google.com/+GacGAC-Group