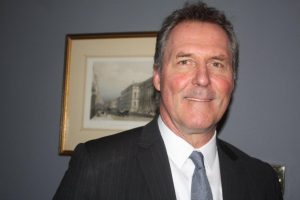 An application that can be readily shipped anywhere in the world in a standard 20 ft container is being advanced as the key to bringing about an environmentally-acceptable future for pollution-prone coal-fired power stations.

Batches of ceramic-based solid oxide fuel cells retrofitted into such plants will make them cleaner and greener and eliminate their dependence on huge supplies of water, says Peter Hogendoorn, chief executive of Veridyne Power, a Vancouver-based private company. It is a solution that “sits between coal and biomass in power generation.”

Loaded from manufacturer on to truck, any shipping box could transport a set of cells that would deliver around 1.3 megawatts.

Mr Hogendoorn has been in London to update brokers and investors on the progress of his company, as part of a fund-raising drive for between C$5m and C$6m to underpin continuing technical development with specialist partner businesses ahead of a possible initial public offering or negotiations for strategic investors.

Time is of the essence. More than 500 coal-fired plants in North America and Europe are under threat of closure by 2020 if they fail to meet environmental regulations. Coal combustion is blamed for more than 30% of total US carbon dioxide production.

Veridyne views the best course of action as life extension for the plants by securing a means to slash their noxious emissions. Shutdowns could cost hundreds of millions of dollars, and many of the facilities have huge debts that would be left outstanding.

In any case, the grid cannot afford to lose such an amount of connectivity as, says Mr Hogendoorn, there is a risk of power brownouts across the West. Renewable energy such as wind and solar could not fill the potential gap, and conventional carbon capture would be too expensive.

“The market is in desperate need of a solution, ” said Mr Hogendoorn. “We believe we have found a competitive answer to this rather large problem. Energy consumption is increasing, and, believe it or not, coal is still the largest base-load power source that the world relies on, ” Mr Hogendoorn told his City audience. Clean energy had to be produced from coal.

Transforming legacy combustion systems by incorporating ceramic-based fuel cells cost the same as conventional coal technology, which is the cheapest form of fuelling power stations, he said. “The chemistry and technology are proven, and Veridyne controls the intellectual property which was originally researched and published from the University of Queensland. We are taking this out of the science lab and bringing it into the real world.”

Veridyne is working closely with coal-fired power producers in China and the UK to configure a 25 KW core reactor into a 20 ft container-sized module producing 1.3 MW each, which in turn can be multi-plexed into multi-megawatt installations.

Solid oxide fuel cells have become much cheaper to produce, stronger and of better quality than in the past. Used for power generation, they cut nitrous oxide and sulphur dioxide emissions to zero, and CO2 is 50% lower at the same power output as from conventional coal consumption, claims Veridyne. This exceeds the US Clean Air Act requirement for a 32% reduction by 2020.The cost is around $1, 000 per 1, 200 KW hour “which is at the lower end of power generation costings.”

Mr Hogendoorn said of the technology: “It is sustainable, with a return-on-investment driven proposition – ROI is doubled – without reliance on subsidies.” The value proposition is “cheap coal + clean energy = lower costs + environmental sustainability.” A prototype is evolving at the company’s development partner facilities in western New York State, “is getting a lot of positive attention across the sector.”

Fuel cell application is “the holy grail” of power station operation, especially for ageing and outdated plants, but design difficulties, and manufacturing limitations, have hampered commercialisation. Fuel cells were invented over a century ago and NASA and some other organisations have been using the technology since the 1960s, but because of hitherto high cost and inconsistent field life performance, the wider market has been slow to follow.

The “repeat-ability” of millions of precision identical tubes of complex mould is needed for the purpose. With low cost ceramic materials and nickel oxide catalysts, the fuel cells can deliver attractive economics, insisted Mr Hogendoorn. Plate (planar)ceramic components have been tried, but have the disadvantage that thermal stress causes leaks at the seams; tubular designs have a 40 times lower ratio of seam length to surface area, and the surface area is larger. The latter variants will survive a high-pressure environment, but have to be robust.

Veridyne developed its business model in co-operation with US-based Electric Power Research Institute Inc which conducts research and development into the generation, delivery and use of electricity. EPRI is an independent, non-profit organisation with a worldwide membership of more than 1, 000 electric utilities, other corporations and entities, and government agencies. Veridyne’s technology, for which patents have been applied, gives a substantial edge over potential competitors, it says.

The Veridyne chief executive noted that energy consumption worldwide is projected to surge more than 40% by 2035. China alone is expected to increase its consumption by 75% by 2035. The more than 1, 400 GW of new production in development or planning globally would nearly double the present total of 1, 600 GW.

Veridyne Power has already raised C$1.2m towards its current target sum. It has a small valuation at C$14m, but reckons that its partner agreements are the equivalent of $50m to $75m in risk-free capital.

“We are focusing initially on coal, but the technology will work with any hydrocarbon fuel, ” concluded Mr Hogendoorn.

Periodic servicing and maintenance of lifeboats and rescue boats on agenda