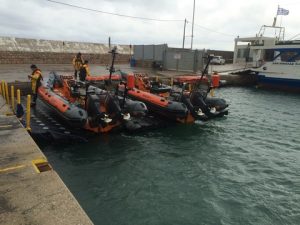 From the port of Chios

“We committed to help until the maritime rescue services can cope with the demand for rescue on their waters” says Bruce Reid, CEO of IMRF. “We are not sure what the impact of the announcement about the agreement will be on the numbers of people finding themselves in distress, making the crossing between Turkey and Greece.”

The IMRF’s initiative, with its European members, to support the Hellenic Coast Guard with search and rescue (SAR) missions in the Aegean, is gaining momentum.

The German Maritime SAR service (DGzRS) has rescued 600 people in a week and in their first operation near Lesbos they rescued 57 people including 20 children using the lifeboat Minden. 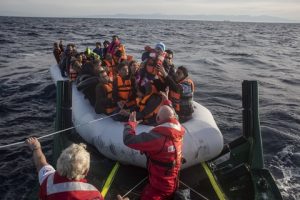 Those rescued were mainly Syrian refugees who were in two rubber dinghies unfit for the open sea.  According to Captain Udo Helge Fox, Chairman of the IMRF and also managing director of the DGzRS, who was in charge of the rescue operation, the majority of those in distress were women, small children and infants, the youngest of about two months old, the oldest woman over 70.

The previous day the Minden, had been blessed by a Greek priest in a ceremonial act in the presence of representatives of the Greek coast guard, volunteers of the Hellenic Rescue Team and Captain Udo Helge Fox.

Since then, under the command of the Greek Coast Guard, the Minden crew has rescued 165 people on one mission; including six babies aged less than three months, and has continued to save refugees fleeing their homeland.

“Many of them are completely soaked. Again and again we have to provide medical assistance for the refugees, some of whom suffer from circulatory collapse, hypocalcaemia or seasickness” reported Ulrich Fader, captain of the Minden,  which has been reinforced by two lifesavers from the German Life-Saving Service (DLRG).

On Chios, the Dutch maritime rescue service (KNRM), has provided equipment and two Atlantic class lifeboats, and has started a training programme, as well as setting up a  lifeboat station being built by volunteers.

There are two instructors based there who will provide training on the boats until Saturday, May 14. On that day it is planned to hand over all the boats and equipment to the Hellenic Rescue team in a special ceremony.

KNRM have launched a fundraising initiative to support their efforts in the Aegean and to date they have raised 100, 000 euros along with 259, 000 euros through sponsorship. They need a further 50, 000 euros to cover all their costs.

“The work of the IMRF members is making a real difference in the Aegean. We are training up volunteers on basic seamanship and using our Rescue Boat Guidelines as the template for practical action.” Said IMRF CEO, Bruce Reid.

“This is the first time the IMRF has been able to co-ordinate a large scale rescue operation over a period time. As well as helping to save lives in the area we are imparting knowledge and experience which will be invaluable for the Hellenic Rescue Services in the future.”

The IMRF project objectives are focused in the short term on helping fill capacity gaps for 2016 and strengthening the regional SAR capability, in order to save more lives.

In the longer term the IMRF wants to use the experience of its membership to help improve the overall capacity and capability in the Aegean to cope with the current high demand and then to help the local organisations develop a sustainable structure for the future.

In close cooperation with the Hellenic Coast Guard, IMRF member organisations from across Europe – including the UK and Ireland’s Royal National Lifeboat Institution (RNLI), the Swedish Sea Rescue Society (SSRS) and the German Maritime SAR Service (DGzRS) under the banner ‘Members assisting Members’, are working with the local SAR services in the Aegean, giving assistance with coordination and training and the provision of equipment and rescue boats, as well as volunteer support over the next 12 months.

The International Maritime Rescue Federation (IMRF) brings the world’s maritime search and rescue organisations together in one global – and growing – family, accredited at the International Maritime Organization (IMO). IMRF’s member organisations share their lifesaving ideas, technologies and experiences and freely cooperate with one another to achieve their common humanitarian aim: “Preventing loss of life in the world’s waters”. See:www.international-maritime-rescue.org