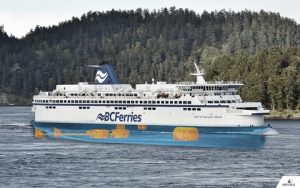 Wärtsilä Corporation, 11 April 2016 at 10 am EET – Wärtsilä has been awarded the contract by Gdansk Shiprepair Yard “Remontowa” S.A., to supply a comprehensive scope of engines, propulsion machinery, integrated automation systems, and gas handling systems required for the mid-life upgrading of two RoPax ferries and their conversion to operate on LNG fuel. The ferries, the ‘Spirit of British Columbia’ and the ‘Spirit of Vancouver’, are the flagship vessels of British Columbia Ferry Services based in Victoria, Canada. The work will be carried by the Remontowa Shiprepair yard in Poland. The contract with Wärtsilä was placed in March 2016.

“We know and trust Wärtsilä’s broad range of competences, and appreciate the detailed engineering and attention to schedule that Remontowa and Wärtsilä have undertaken for the completion of this project. The broad scope of equipment needed heightens considerably the importance of systems integration and LNG experience and in this we believe that Wärtsilä is one of the best in the Marine sector, ” says Mark Wilson, Vice President, Engineering, BC Ferries.

The work on the first of these ships will be carried out during the 2017/18 winter season, and during the following winter season for the second vessel. This means that the time allowed for completing the work is just seven months, including a delivery voyage of more than one month each way. This demanding schedule requires excellent logistics and integrated planning between Wärtsilä and the shipyard. The Wärtsilä equipment will be delivered to the shipyard in mid 2017 and mid 2018 prior to the arrival of the vessels.

The complexity of this project required intensive preparations between Wärtsilä and Remontowa, as well as detailed LNG feasibility studies. Wärtsilä’s unique capabilities as a systems integrator, together with the company’s unmatched portfolio of products, systems and solutions, was an essential element in bringing the project planning to fruition. Wärtsilä has also been able to demonstrate its ability to undertake extended responsibilities beyond merely supplying the new equipment and upgrading the propulsion and manoeuvring installations.

“We congratulate British Columbia Ferry Services for having the foresight and vision to undertake these mid-life upgrades, and for making the two ships environmentally sustainable by converting them to operate on LNG fuel. We are also very pleased to be working on a major project again with the Remontowa yard, with whom we have had good cooperation in the past, ” says Aaron Bresnahan, Vice President, Sales, Wärtsilä Marine Solutions.

“This is an extensive project involving both conversion of the ships to upgrade their performance, as well as the gas conversion work. Fortunately, we have worked in the past with Wärtsilä and have good confidence in both their solutions and their capabilities, ” says Lucjan Falkiewicz, Project Manager for BC Ferries’ MLU project, Remontowa.

In December 2014, Wärtsilä was contracted to supply the dual-fuel machinery for three new ferries being built at the Remontowa yard on behalf of British Columbia Ferry Services.

Wärtsilä in brief:
Wärtsilä is a global leader in advanced technologies and complete lifecycle solutions for the marine and energy markets. By emphasising sustainable innovation and total efficiency, Wärtsilä maximises the environmental and economic performance of the vessels and power plants of its customers.
In 2015, Wärtsilä’s net sales totalled EUR 5 billion with approximately 18, 800 employees. The company has operations in over 200 locations in more than 70 countries around the world. Wärtsilä is listed on Nasdaq Helsinki.
www.wartsila.com