The Battle of Jutland. By Norman Howard. Courtesy of Darnley Fine Art.

A classic painting of the ferocious World War I Battle of Jutland is among marine-themed artworks for sale at the Decorative Antiques & Textiles Fair from April 19-24 2016. The vivid depiction of the only full-scale naval clash of the war is being offered at the Fair in Battersea Park, London, by dealer Darnley Fine Art of Chelsea.

Evoking the smoke and fury of the conflict in darkly muted tones, the canvas was painted in oil by British artist Norman Howard (1899 – 1955), whose subject matter over his lifetime was frequently nautical and coastal, in oils and in water colours.

With horrendous casualties, the battle was fought in the North Sea from the afternoon of May 31 1916 overnight into June 1. The British fleet had sought to blockade the German coast o stop supplies entering the country by sea, but Kaiser Wilhelm had built up his navy to challenge British sea power.

Hoping to gain the advantage of surprise, the German fleet broke out of its ports to attack the enemy, but its code had been cracked by British intelligence. In all, some 250 ships vied for dominance, costing the British had 14 vessels and 6, 094 men and the Germans 11 ships and 2, 551 men. Among the victims were most of the 1, 000 crew of the battle cruiser Queen Mary, which was destroyed.  Hurt by the cost of the encounter, Germany then turned to submarine warfare.

The Norman Howard work is among Darnley Fine Art’s extensive stock of paintings from the 16th to the 20th centuries.

Many of the 150 exhibitors at the Fair are bringing antique items with a regal theme, given that the Queen’s 90th birthday falls on April 21. The foyer display will have many objects relating to royal collections, palaces and homes, and in the body of the hall will be much classic furniture of period design. 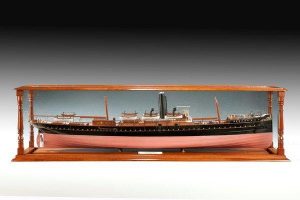 A new exhibitor at the Spring 2016 Decorative Antiques & Textiles Fair is Anderson Wallrock Nautical, although the firm’s partners are well known for their previously separate ventures in antiques circles.

The firm, based in the harbour town of Lymington, Hants, is a collaboration between “sailing mad” duo Tim Anderson and Charles Wallrock. The “passionate yachties” have “amassed a wealth of knowledge and have become leading global maritime dealers, ” says their website. Mr Anderson’s offices and boardroom are filled with ship’s models, marine paintings and artefacts, many with an Americas Cup flavour. Mr Wallrock started out as a “man with a van” and later founded Wick Antiques and was a supplier to Harrods antiques department until it closed in 2011.

He and his business partner are bringing a wide array of work to the Fair. 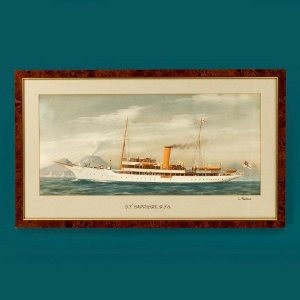 Among their offerings is a pair of water colours of yachts flying the Royal Thames yacht club burgee (a burgee is the distinguishing flag of a yacht club).

The framed watercolours dating from 1891 show the gaff racing cutter Xanthe with Dartmouth in the background, and are signed by the painter Barlow Moore (1834-1897).

The Royal Thames is the oldest such club in the UK and said to be the oldest continuously operating yacht club in the world. It was established in 1775 when the Duke of Cumberland, brother of George III, put up a silver cup for a race on the River Thames and formed the Cumberland Fleet. As the name implies, yachting originally took place on the Thames but the Solent became increasingly important in the 1850s as the steam train improved access to the south coast.

Anderson Wallrock’s display at the Fair includes an unusual colonial dockyard-made model from 1820 of a Royal Navy 36-gun man o’ war. The hardwood hull has satinwood decks, decorated around the bulwarks and transom in a later glazed mahogany case. The dealers say the model was probably made in Bombay Dockyards for the Admiralty.

Another feature is a shipbuilder’s model from 1924 of the SS Fusilier with detailed decks fittings in a glazed mahogany case with builder’s plaque. The Fusilier was one of three passenger steamships belonging to Edinburgh Shipping Co to carry passengers between Leith and London in the 1920s. Built in 1924 by Caledonian Shipbuilding the ship was badly damaged in an attack by the Luftwaffe in June 1941. The Fusilierwas towed to shallower waters by two Royal Navy destroyers but later sank.
The accompanying model of the sister ship the SS Royal Archer is on display in the convening room of Trinity House museum, Edinburgh.

Still in the area of models, Anderson Wallrock has an exhibition-quality shipbuilder’s model of the yacht squadron steam schooner Helen, built in 1864 by Thomas B Seath & Co of Glasgow with finely detailed superstructure and silvered metal fittings.
Original ship details:
The schooner was built during the halcyon days of private steam yachting for the 2nd Marquess Conyngham, who served under Lord Liverpool as Under Secretary of State for Foreign Affairs and later under Canning and the Duke of Wellington as Lord of the Treasury.
As well as his political career he held senior military rank becoming a general in 1874. Upon the death of William 1V in 1837 he went to Kensington Palace to inform Princess Victoria that she was now monarch and was the first to address her as ‘Your majesty’.
The model of the Helen was formerly in the collection of London socialite, Mark Birley, founder of Annabel’s Club, Mayfair.

Another rarity are two finely-cast, Admiralty-made bronze ship’s plaques of a lion atop a rocky outcrop, the symbol of Africa, with the name of the Royal Navy battleship,  HMS Africa, highlighted in red script and cast on the reverse Property of Capt Leveson.

The plaques were commissioned for the pre-dreadnought battleship of the King Edward VII class, launched in 1906. HMS Africa served in the Atlantic Fleet, the Mediterranean and off South America and was flagship to Vice Admiral William Henry May. HMS Africa was the first ship successfully to launch a plane from deck in 1912. Capt Leveson commanded HMS Africa from1909 into the early years of World War I. He was mentioned in despatches, promoted Admiral and became aide-de-camp to George V. 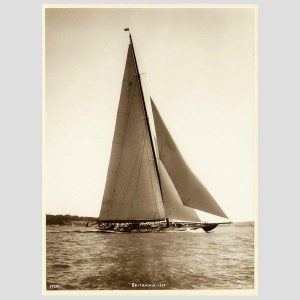 Two mirrors which were on board HMS Blanche at the battle of Copenhagen 1801 remarkably have retained their original glass, which survived “probably many more battles for over 215 years, ” says the catalogue.

Another gem is a gouache of the Royal Yacht Squadron steam yacht Sapphire. The painting is dated 1893 and signed and inscribed L Papaluca and SY Sapphire RYS. One of the last grand steam yachts before the Great War,  Sapphire was designed by GL Watson & Co and built in John Brown’s Clydebank yards in 1912. The craft was ordered by Herbrand, 11th Duke of Bedford, to replace his existing Sapphire. The sumptuously fitted out successor was registered at 1, 207 tons gross and had an instantly recognisable profile.

Although nominally owned by the Bedfords until 1919, the Sapphire spent most of the war as an armed auxiliary patrol yacht until released by the Admiralty and bought by Lord Furness before being sold to Urban Broughton (later Lord Fairhaven) under whose colours the yacht sailed the world. At the beginning of World War II, theSapphire was purchased initially as a convoy leader but then became a submarine tender in Campbeltown Loch in 1940 under the name of HMS Breda. Accidentally sunk in a collision in 1944, the yacht was deemed not worth raising.

A 1933 en grisaille watercolour on paper, prepared for George V by keen yachtsman Charles Dixon RA has outstanding detail and depicts the Royal yacht Britannia rigged like a J class, with the sail number K1 and flying the Royal signal flag. Here,  Britannia is racing in the Royal Yacht Squadron regatta with competitors around her, the Royal Yacht Victoria and Albert flying the Royal Standard indicating that the Queen is on board.