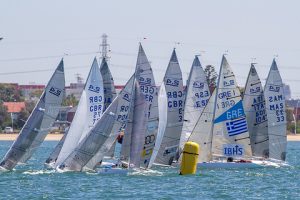 Paralympic and World Champions will be in the 2.4 Norlin OD and Sonar fleets at Sailing World Cup Hyères as the countdown to the Rio 2016 Paralympic Games intensifies.

The Paralympic Games is just 141 days away and time on the water racing against rivals is key for medal hopefuls. Hyères is another big step on the journey to the Rio 2016 Paralympic Sailing Competition with fleet sizes similar to those at the Games itself. Fleets of 20 and 12 in the 2.4 Norlin OD and Sonar bears some resemblance to the 16 and 14 that will be seen at Rio 2016, providing the perfect platform for Paralympic preparation.

Canada’s Paul Tingley, Logan Campbell and Scott Lutes come into Hyères off the back of an impressive victory at Sailing World Cup Miami at the end of January. The victory was somewhat of a breakthrough performance for Tingley, a Beijing 2008 2.4mR gold medallist, as it was his first in the Rio quadrennial. 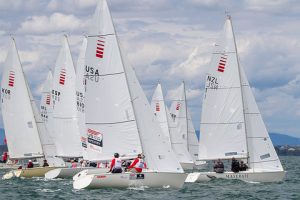 Sonar fleet at the 2015 Worlds

In fact, his last Sonar gold medal came more than 14 years ago at the IFDS Disabled Sailing World Championships in 2001. The monkey is off Tingley’s back now and he will want to spearhead his teams form into the remainder of 2016 by picking up where he left off.

The Sailing World Cup Hyères Sonar fleet features some of the most competitive Paralympic sailors around, all of whom have the capabilities of reaching the podium.

France’s Bruno Jourdren, Eric Flageul and Nicolas Vimont-Vicary won gold at the 2013 and 2015 editions of Sailing World Cup Hyères. They were denied gold at 2014 following a final day protest that resulted in a disqualification, demoting them to second overall. Their expert knowledge of their own waters will give them an advantage in 2016.

Great Britain’s John Robertson, Hannah Stodel and Steve Thomas benefitted from the French team’s disqualification in 2014, taking the title. Mixed performances at Sailing World Cup Melbourne and Miami have recently followed after their victory at the 2015 Para World Sailing Championships so they will be aiming to get back to winning ways.

If form is anything to go by then Australia’s Colin Harrison, Jonathan Harris and Russell Boaden are clear favourites in Hyères. A run of ten consecutive podium finishes and three victories from their last five events ensures their confidence is sky high.

London 2012 silver medallists Jens Kroker, Robert Prem and Siegmund Mainka (GER) and bronze medallists Aleksander Wang-Hansen, Marie Solberg and Per Eugen Kristiansen (NOR) will also be among the entrants.

Damien Seguin of France will come into Hyères off the back of four consecutive victories that includes a world title and 2015 honours in the French Riviera. Seguin is peaking when it really matters building up to Rio and it’s hard to see who will stop him.

One sailor who has the most recent previous history of doing exactly that is Heiko Kroeger (GER). The big German was the last sailor to defeat Seguin, winning gold at the 2014 World Championships and in Hyères in 2014.

The pair will come head to head in just over one week’s time, vying for a golden finish.

London 2012 Paralympic gold medallist Helena Lucas (GBR) took Sailing World Cup Miami honours earlier on this year but the fleet lacked Seguin and Kroeger. Nonetheless, a win is a win and she has the credentials to overcome both competitors.

Bjornar Erikstad (NOR), Megan Pascoe (GBR), Matt Bugg (AUS) will also be in the hunt.

The first of eight races in each fleet will commence at 13:30 on Wednesday 27 April and concluded on Saturday 30 April.