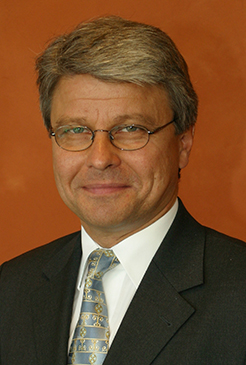 Ralf Bedranowsky, CEO and Chairman of DVB Bank SE’s Board of Managing Directors, commented on the Bank’s interim financial statements:

“In a challenging environment – in geopolitical, macroeconomic and industry-specific terms – the Bank’s business model once again proved resilient. DVB’s clear focus on financing transportation assets has paid off, especially during these testing times.

We originated 27 new transactions in our core Transport Finance business, with an aggregate volume of
EUR1.2 billion (Q1 2015: 51 new transactions with a total volume of EUR1.7 billion). Whilst the Bank adopted a cautious lending policy in the persistently difficult segments of the shipping industry, it very successfully originated new business in Aviation Finance with aircraft financings, and in Land Transport Finance, where it finances rail rolling stock and rail-related vehicles.

We were also successful in the advisory business where net fee and commission income rose by 3.1%, to EUR27.0 million.

In line with our projections, allowance for credit losses increased from EUR13.4 million to EUR36.3 million. The increase was largely required for legacy exposures in the Shipping Finance portfolio, and for financings in the Offshore Finance portfolio, which is burdened by the slump in oil prices.

The first quarter of 2015 included substantial non-recurring income from the sale of investment securities, due to the partial disposal of the stake in Wizz Air Holdings Plc. This one-off effect, which was generated in our Aviation Investment Management activities, did not materialise during the reporting period 2016.

We continue to assess the financial year 2016 with cautious optimism, and are endeavouring to achieve consolidated net income that should approach the previous year’s level. Given the persistent challenges on the shipping and offshore markets, we are aware that allowance for credit losses will continue to remain on an elevated level.”

The detailed items of the interim financial statements are provided below:

Net interest income decreased by 10.8%, from EUR64.8 million to EUR57.8 million, due to the following reasons: risk costs included in net interest income of EUR0.9 million (Q1 2015: EUR2.7 million, largely comprising expenses incurred for vessels which are under the Bank’s control, as part of restructuring measures. Net interest income is also burdened by early loan repayments as well as the requirement to maintain additional liquidity with the European Central Bank (at negative interest rates), due to new EU liquidity requirements (LCR). Moreover, increasing global competition for transport market financings has put pressure on interest margins.

Net result from financial instruments in accordance with IAS 39 (comprising the trading result, the hedge result, the result from derivatives entered into without intention to trade, and the result from investment securities) – which is generally volatile – amounted to EUR27.9 million (Q1 2015: EUR60.8 million). The previous year’s figure included substantial non-recurring income from the sale of investment securities, due to the partial disposal of the stake in Wizz Air Holdings Plc. This one-off effect, which was generated in the Bank’s Aviation Investment Management activities, did not materialise during the reporting period 2016.

DVB’s nominal volume of customer lending (the aggregate of loans and advances to customers, guarantees and indemnities, irrevocable loan commitments, and derivatives) was down 4.7%, to EUR24.1 billion. In US dollar terms, it remained constant, at US$27.5 billion.

DVB employs key financial indicators to assess and manage its business: the return on equity (ROE) before taxes, the cost/income ratio (CIR) and the risk-adjusted Economic Value Added (EVA(TM)). In order to harmonise the calculation methodology and enhance transparency thereof, the Bank has included expenses for the bank levy and the BVR Deposit Guarantee Scheme, as well as the operative component of the IAS 39 result (the result from investment securities) in its calculation methodology for all three financial indicators since the first quarter of 2016. Expenses for the bank levy and the BVR Deposit Guarantee Scheme must be recognised at the beginning of each financial year, for the full year, and are then no longer amortised over the course of the year. However, in DVB’s view, amortising these charges over the periods within a financial year is commercially sensible for calculating key financial indicators, since this allows for a more realistic reflection of business performance.

On this basis, the Bank’s financial indicators developed as follows:

The ROE before taxes stood at 1.3% (Q1 2015: 23.5%) and was calculated as follows: consolidated net income before IAS 39 and taxes (but including the result from investment securities) was divided by the total of weighted capital (issued share capital, capital reserve, retained earnings excluding funds for general banking risks, non-controlling interests and deferred taxes, as well as before appropriation of consolidated net income) on a pro-rata basis.

The CIR totalled 54.4% (Q1 2015: 34.1%) and was calculated in the following manner: the aggregate of general administrative expenses as well as pro-rata expenses for the bank levy and the BVR Deposit Guarantee Scheme was divided by the total of net interest income before allowance for credit losses, net fee and commission income, the result from investment securities, results from investments in companies accounted for using the equity method, and net other operating income/expenses.

The risk-adjusted indicator EVA(TM) amounted to EUR-21.2 million (Q1 2015: EUR53.9 million) and was calculated by deducting pro-rata risk capital costs from consolidated net income before IAS 39 and taxes (but including the result from investment securities).