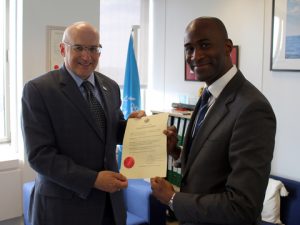 The full list of treaties acceded to by Saint Lucia is as follows:

– the International Convention for the Control and Management of Ships’ Ballast Water and Sediments, 2004 (BWM 2004)

– Protocol of 1997 to amend the International Convention for the Prevention of Pollution from Ships, 1973, as modified by the Protocol of 1978 relating thereto (MARPOL PROT 1997)