The 2016 Para World Sailing Championships came to a breathtaking finale in Medemblik, the Netherlands as the final race of the championships decided the medals in the Sonar fleet.

There were points cushions in both the SKUD18 for Poland’s Monika Gibes and Piotr Cichocki and in the 2.4 Norlin OD for Germany’s Heiko Kroeger heading in to the last day of racing and both held on to win gold. The Sonar was a different matter with gold switching hands throughout a thrilling final race.

Arguably the most exciting race of the day was in the Sonar fleet as the gold medal changed hands continuously throughout.

Norway’s Aleksander Wang-Hansen, Marie Solberg and Per Kristiansen took a bullet in the first race of the day to bunch the top four together, only separated by six points going in to the final race. The battle was on.

Great Britain’s John Robertson, Hannah Stodel and Steve Thomas took the bullet, but only just from Australia’s Colin Harrison, Jonathan Harris and Russell Boaden. The Britons had to wait and see if Norway could do them a favour and beat the American’s to the line. They couldn’t. USA’s Alphonsus Doerr, Bradley Kendell and Hugh Freund had done it, they were world champions.

Describing the race, Kendall said, “The last race of the day, last race of the regatta, we knew who we had to cover and we were happy with our start, we knew where they were. The first shift we actually didn’t sail to the right side that we wanted to and we had to fight our way back, but we did that.”

With four team’s vying for the medals in such a close contest, Kendall was happy to get the job done, “This world championship was a very tight regatta. The world’s best were here and we are so happy with what we have done and where we are at right now.”

Where they are right now is on the top of the podium and 2016 Para World Sailing Champions with 26 points.

With the final bullet of the championships, John Robertson, Hannah Stodel and Steve Thomas took the silver medal on 27 points with Colin Harrison, Jonathan Harris and Russell Boaden taking the bronze on 28.

The 2.4 Norlin OD world champion, Germany’s Heiko Kroeger may have won gold but did not make it easy for himself in the final race of the championships.

Despite taking a bullet in the first race to increase his lead at the top, he then had to deal with a coming together with another competitor which dropped him back in to tactical mode searching for his closest rivals. Talking of the final race, Kroeger said “I had a crash with Dee Smith (USA) rounding the second mark and I had to do a 720 and that dropped me to around fifth. But it was ok as Matt [Bugg] was a few places behind me and Damien [Seguin] wasn’t too far ahead.”

Kroeger dropped back further still, but even though he crossed the final finish line in 11th position, he did cross it as the world champion with a five-point lead over former champion Damien Seguin (FRA). Kroeger regains the 2.4 Norlin OD world title he won in 2014.

A deflated Seguin had a disappointing eighth in the first race but followed that with a second. The gap to Kroeger was a step too far, but those results meant he had overhauled Australia’s Matt Bugg who had a third and a discarded 14th. Luckily for Bugg, he had enough of a cushion over the current Paralympic champion Helena Lucas (GBR) to keep the bronze medal.

Reflecting on the championship, Kroeger said, “It was tough racing here. I had some good races and some not so good races which made it tight but I’m really happy I worked it out and it’s great to win.”

It did work out for the German and he now goes in to the Rio 2016 Paralympic Games as world champion. A calm, measured and realistic Kroeger doesn’t see being champion going in to the summer showpiece as a big advantage though, just another day at the office, “I guess it’s good to go Rio as world champion and not fourth or fifth, ” he says with a wry smile.

Kroeger wins the gold medal with 32 points, Seguin takes silver with 37 points and Matt Bugg finishes the championship with a bronze medal on 42 points. Taking the final bullet of the championship was Italy’s Antonio Squizzato. 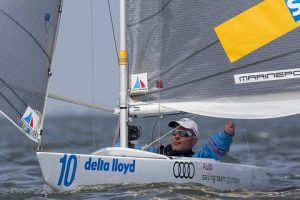 With the world title almost certainly wrapped up the previous day, Poland’s Monika Gibes and Piotr Cichocki just had to stay out of trouble and continue as they had done all regatta with their high, consistent finishes. With a third and a fourth, Gibes and Cichocki finally sealed the win and made it official with 18 points.

The pair have been quiet all week when they have been asked about their chances, but once they came ashore as gold medallists they were quiet for another reason, they simply had no words. Gibes simply repeated herself over again, “I cannot believe we won. I really cannot believe it. I feel so excited that we won the world championship.” Her team mate Cichocki was filled with emotion and could barely speak either saying, “My heart is double now. It’s an unbelievable feeling. I am so proud.”

With Gibes and Cichocki out in front on the leader board, there was still a fight for the silver and bronze medals and also other pressing issues to resolve, Paralympic selection.

Initially taking two bullets, the Australian’s thought they had secured silver, but after a protest from the first race of the day they had one wiped off which promoted the Britons into first place in that race and in turn cemented the silver medal for Rickham and Birrell.

The other prize on offer was Rio 2016 Paralympic selection and Fitzgibbon and Tesch will have done their selection chances no harm by taking home a bronze medal from the championships with their selection rivals Amethyst Barnbrook and Brett Pearce finishing in sixth overall.

USA selection was also on offer in Medemblik. Sarah Skeels and Cindy Walker finished in tenth and Ryan Porteous and Maureen Mckinnon-Tucker finished in 11th. The selection process took in to account this Para World Sailing Championships and last year’s in Melbourne, Australia and with close finishes in both regattas the selection is a tight one to call for a place at Rio 2016.

In the final big regatta for the three Paralympic classes before the Rio 2016 Sailing Competition new champions were crowned and go in to the summer showpiece on top of the class. With a tight field and top class athletes in Medemblik, the Netherlands it was a great advertisement of what is set to come from the first South American Games in September.

Tara weighs anchor: 11, 000 km left before the corals of the Pacific