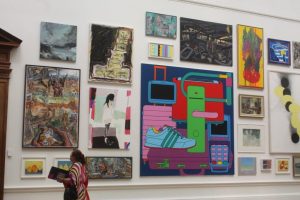 It is a tall order – a neck-craning one at times – to take in 1, 240 new works of art in one go, but this is the Royal Academy summer show. There is little point the visitor picking out a favourite one or two works – just enjoy the jam-packed experience as a whole.

Invention, imagination and immodesty, and what some might term insanity, is running riot in the UK (mainly London here) arts scene, it is plain.  What passes muster for a theme is that some of the largest-scale offerings for 2016 are from well known artistic duos. 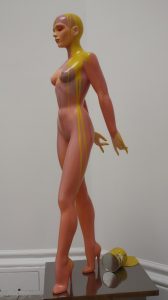 Co-ordinator for the Academy’s 248th summer exhibition, which runs until August 21, is Richard Wilson, a British sculptor and Royal Academician.

It would be impossible to “co-ordinate” such a volume and range of work – in general, it amounts to the usual colourful swirl, and after all this is the final choice from 12, 000 submissions. Richard Wilson boldly declares the 2016 exhibition as “unpredictable, stimulating and startling.” He himself is best known for his installation 20:50, a steel tank filled with 8, 000 litres of used sump oil amounting to an installation that is permanently in the Saatchi Collection, and was hailed by a critic in the Daily Telegraph, UK, as “a contender for the most important work of British art of recent decades.”

To return to Burlington House, headquarters of the Royal Academy which sets aside most of its galleries for “the world’s largest open submission show.” It is the place to get to grips with the multi-faceted face of contemporary art in its many aspects, from established artists to others often no less talented, but less feted so far.

One can recommend the visitor to set out with a determination not to be overwhelmed. As usual, the pivotal Wohl Central Hall gets a tour off to a dramatic start. The 10 works there include one of Allen Jones’s interpretations of sexual imagery, an assertive fibreglass female nude with a kicked-over paint pot, the construction entitled Action Painting. On the wall opposite is the blazingForever (Yellow),  a light-sculpture by the in-your-face duo Tim Noble and Sue Webster. This is above Marie Antoinette, the Queen’s Hamlet (Model, Zahia Dehar) which is a hand-painted photograph on canvas from the French duo Pierre et Gilles.

Still in the central hall, Peter Fischli & David Weiss show their six-minute video Büsi (Kitty) from 2001, in which a cat laps milk. The film received much attention when displayed on electronic billboards in New York’s Times Square.

Keeping up the push to be startling in the central hall is the duo Jennifer Allora & Guillermo Calzadilla, based in Puerto Rico, with 2 Hose Petrified Petrol Pump (2012), a stone carving of a fuel pump.

Gallery III is one mass rush of colour expressed through dozens of disparate works. It is a relief to view relatively pensive presentations such as those from Royal Academy stalwart Eileen Cooper. Such are her Perfect Day, a tranquil quasi-idyll, another oil Ballerina, bronze Serenade, charcoal Heart, and her woodcuts Solo in Blue and Luna.

Two from Marguerite Horner, whose oeuvre has a deceptive photographic and almost leached appearance, are  On the Brink, and The Shifting Shadows, a suburban landscape.  Both are done in oil on linen.

London-based Marguerite has been praised throughout a career which has included working as a scenic artist for the BBC, collaborating with leading photographers, and helping on advertising campaigns, and this is her seventh outing for a Royal Academy Summer Exhibition. She was chosen for the 54th Venice Biennale and in 2012 had her first London solo exhibition, in the catalogue for which critic Lady Marina Vaizey wrote that her paintings “lift the ordinary into the extraordinary and the specific into the universal.” 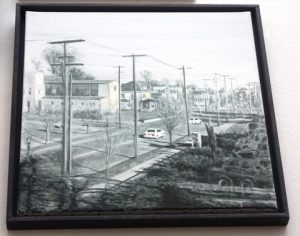 The Shifting Shadows. Oil on linen. By Marguerite Horner.

In Gallery VI, Akiko Ban, a Tokyo-born artist living in London, presents a triptych on paper Sky Goddess. She conjures a strikingly colourful scene in Japanese water colour, PVA glue, glitter, wiggly eyes and rhinestones. The three scenes are, one supposes, a fantastical reflection of heaven, earth crawling with creation, and of creatures of the deep. “I create my own ritual objects and environments which uplift my soul, ” says Akiko.

Works by the 15 two-people partnerships featured here includes a large-scale suspended kite sculpture (Will You Please Be Quiet, Please) by the prolific Heather and Ivan Morison, and grim sculpture The New Arrival, a family of eyeless mannequins tending a machine in which grotesque activity is going on, by brothers Jake and Dinos Chapman. 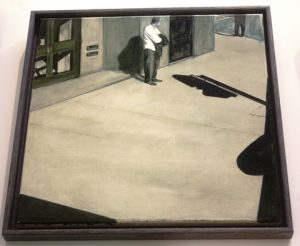 On the Brink. Oil on linen. By Marguerite Horner.

On either side of the entrance staircase, twin sisters Jane and Louise Wilson display a double-height, photographic series made in Ukraine in 2010 entitled  Atomgrad (Nature Abhors a Vacuum)  based on the aftermath of the 1986 nuclear disaster at Chernobyl. The photographs document the city of Pripyat, which is inside the 30km exclusion zone and which with its civic and public buildings, the People’s Palace, hotel, kindergarten, swimming pool, cinema, was abandoned in haste. The work explores the ideas around “dark tourism” given that there are now one-day bus tours from Kiev to the exclusion zone and Pripyat.

A survey entitled London’s Burning: Read All About It is contributed by the Singh Twins, Amrit and Rabindra, UK-born Indians who are keen examiners of history. It explores events from the Gunpowder Plot, the Great Fire of London, the Gordon Riots and the Blitz to the riots of 2011. The sisters used archival ink print, watercolour and gold. 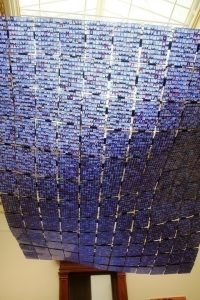 The Portrait of Sakıp Sabancı. Multi-image installation. By Kutluğ Ataman.

Ilya and Emilia Kabakov, authors of huge installations, show an oil painting of autumn leaves and trees,  Emergency Exit #4. This was part of an installation for the 1993 Lyon Biennale based on the idea of an artist’s studio, full of unfinished work.  Born in Dnepropetrovsk, the Kabakovs are husband and wife and live in Long Island, US. Ilya came to the West in 1985, and Emilia who originally planned to become a professional pianist, emigrated to Israel, then New York.

An entire room is given to photographs by Bernd & Hilla Becher of German industrial architecture – strangely-affecting water towers, gas tanks and cooling towers. They did much-appreciated work in recording the often elegant design of the vanishing structures of their country’s energy powerhouse in the 20th century. Bernd died in 2007 and his wife in October 2015.

The architecture section includes a poignant reminder of Dame Zaha Hadid, the great architect who passed away at the age of 65 in March 2016. On display is her aerial design view in acrylic on black cartridge of the proposed Cardiff Bay Opera House, a mid-1990s project that was doomed when the Government bowed to pressure from local opponents and refused funding. Her design was later adapted for the acclaimed Guangzhou Opera House in China. 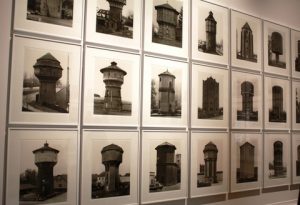 As ever the art comes in all shapes, forms and sizes – even that of a shipping container, by Jimmy Cauty  (the self-described “co-creator of chart-topping band The KLF and its subsequent, million pound-burning arts incarnation The K Foundation”) housing “a monumental post-riot landscape in miniature.” The exhibit is for sale at £46, 000.

Still on large-scale projects, one gallery is dominated by a multi-image installation from Istanbul-born Kutluğ Ataman, an outspoken filmmaker and artist whose current works focus on “history and geography as man-made constructs.” He has been described as Turkey’s most controversial contemporary artist. 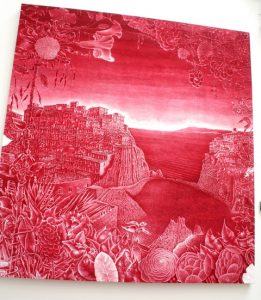 Kutluğ Ataman gives us a huge example of video art,  The Portrait of Sakıp Sabancı which has some 10, 000 LCD panels and took three years to complete.  It was commissioned by the family of Sakıp Sabancı in 2011 to mark the 10th anniversary of the death of the Turkish businessman and philanthropist, and was shown at the Venice Biennale in 2015. Each panel contains a portrait of one of the many people known to Mr Sabancı who is recognised for his contribution to the development of technology and through a foundation his sponsorship of health, education and culture projects in Turkey. The portraits are of those who were supported by him, who worked with him, and family members.  The conglomerate Sabancı Holding controls more than 60 companies in industries including textiles, tourism, automotives, chemicals, tobacco, cement, insurance and banking and is involved in many international joint ventures.

The majority of the Summer Exhibition works are for sale, proceeds from which will support the free postgraduate tuition available in the RA Schools. For the season, the Royal Academy will be open until 10pm on Fridays and Saturdays.