The formal invitation to the Panama Canal Expansion inauguration came with a special gold crest, announcing that the sender was His Excellency the President JC Varela, the highest authority of Panama. The invitation is to attend the opening of the Agua Clara Locks on the Atlantic side at 06:00hrs.

A second ceremony will be held at 16:00 hrs at the new Cocoli Locks at the Pacific side where the President and distinguished guests will be there waiting for the ship to enter the Pacific Lock.

You may ask why these invitations have made all the foreign male guests rush out to the shops.

Very simple, the attire for ladies is casual; however, the stipulation for male attire is long sleeve white guayabera and dark trousers for the gentlemen.

The Guayabera is very well known in Latin American countries. Every man usually has one or more. Commonly made of linen or poplin and designed to be fresh to combat the heat, the Guayabera is considered to be formal attire for attending official ceremonies in the tropics when such events take place in the open air under the blazing sun, when the protocol calls for it, and it is always white.

The design of a typical Guayabera is a simple shirt; many such shirts have slits on either side. Guayaberas can be found in pastel colours and of course, the pristine white for formal occasions. It is worn not tucked in, but over the top of dark trousers.

Usually, the front of the shirt has four pockets, and sometimes it is decorated with tiny pleats running from top to bottom. The pockets have also sewn buttons. At special occasions like weddings and State ceremonies you can find men wearing beautifully starched linen guayabera with gold buttons. 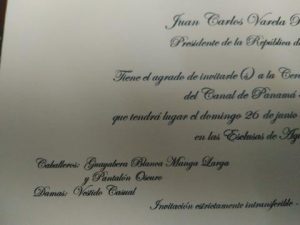 When our foreign visitors received the invitation card, they asked their hotel concierges, where can we find a Guayabera? And indeed, in less than a week, many shops have sold out of our white long sleeve Guayaberas.

Yesterday, we went to El Dorado in Panama City, to the well-known Felix B Maduro department store, a shop perhaps established as many years as the Republic of Panama itself. When we mentioned Guayabera, and the Canal, they told us to talk to Mrs de Sedas, as she was the shop’s expert in protocol, and so she was.

A group of sceptical Englishmen were guided on how to dress for Monday, including the vest underneath, which someone dismissed as “what ones wears when in hospital.” From there, we went across the road to a no less famous shop, where the group bought more Guayaberas and Panama flags and of course the proverbial Panama hats.
The men, who confessed to hating shopping, told us not to disclose that they were out doing that very thing, and we replied what happens in Panama will stay in Panama, but our Canal has the power even to send men shopping for Guayaberas and “hospital” vests!

For those gentlemen who were too shy, we managed to get a shop to take the Guayaberas to their hotel, and we heard that a few were bought.

Tomorrow, just like Ascot Ladies Day, we will send you full coverage of the Guayaberas on show at one of the most important days in the history of Panama and worldwide trading.

What an ambiance of fiesta we can already perceive in the air. There have been thousands of biometric tickets given to the Panamanian people. Each ticket has the bearer’s name and fingerprint on them and tickets are non-transferable to ensure maximum security for the Canal. No private cars are allowed near the key points, so the Ccanal authorities will provide transportation from designated points.

For foreign guests, everyone who is going to the Atlantic side will need to leave their hotels and residences around 05:00 am to go to Colon.

On a day more than one hundred years ago, at 05:00 am a train left Panama City with guests, government leaders and diplomats to cross the isthmus and board the SS Ancon for the inaugural transit. After a decade of huge efforts involving disease among labourers and engineers, transformation of the topography and expectation of a historic breakthrough, the dream of a canal was at last a reality.

Today in 2016, expectancy, pride and enthusiasm can be felt in the air.

Welcoming the first vessel to grace the expansion, the containership COSCO SHIPPING PANAMA means so much for the local maritime industry and is an expression of pride as a country that in its national anthem has the lines “You see, roaring at your feet, two oceans, which give direction to your noble mission.”

Yesterday the Panama Canal Administration building was full of press agency representatives and journalists recording history with interviews and documentaries. We saw many visitors including the heads of the main churches and  religious groups. The Panama Canal, as we all know, is a 24/7 operation, and the Canal protocol, security and administrative teams have worked towards this special day non-stop for many months.

Ah the weather, yes! The forecast is for Sun, Heat and Rain! That glorious rain that makes the canal possible as every single transit drains over 52 million gallons of fresh water, that’s quite a few buckets full of rain!