A journey of the Hellenic boats 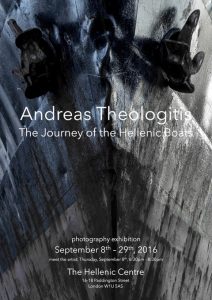 In support of Arts and Maritime Arts in particular, here is an event not to be missed:  Andreas Theologotis’ “The journey of the Hellenic boats”

at The Hellenic Centre
16-18 Paddington Street
London W1U 5AS

A word for a picture

The history of Greece is deeply rooted in its sea, its islands and its ships which ply the oceans.
Through the lens of his camera, Andreas Theologitis captures the detail of these boats as they are born, live and pass away. Traditional hulls, made by hand, as they have always been made through the centuries, with imagination and unrelenting effort. Metal hulls result of everyday human toil.

Tradition and art, movement and reflection, rust and labor expressed dynamically through the detail of color, texture, material, leave everyone’s imagination free to create a unique image.
The collection “Hellenic Boats” was first presented in Athens in July 2014. In Brussels, in April 2015, it made the journey to the heart of Europe. At the port of Piraeus, land of inspiration for his creator, in May 2015 was enriched with new visions. On the occasion of the European Month of Culture, on May 2016, the exhibition was presented in the Embassy of Greece in Washington DC.
It is an honor that the journey continues during September 2016 here, in the Hellenic Centre in London.

Andreas Theologitis is an architect – urban planner.
He studied in Belgium in the 80’s. The first years of his career he worked in Brussels and had the opportunity to take part in projects that marked the urban texture of the city.
In the early 90’s he returned to Greece where he participated in important architectural and urban projects. He is the coordinator for large commercial and tourist developments, urban regenerations and planning studies in Greece and abroad.
His involvement in photography dates from the “age of the darkroom”.
A man with multiple facets of talent, he quietly observes the world around him. Each time, like a first time. Through his travels, he gives his own view of the world that surrounds him. He experiments with his photographs and adopts a different view of his environment. He creates surprise by transforming simple objects and creates unique views of the objects he loves. In his photographs, the level of abstraction invites everyone to a world of own interpretation. It is a personal need of expression and research beyond rules giving “another view of reality”.

Information on the artist and his work:
The Photography of Andreas Theologitis
http://photography.atheo.eu
https://www.facebook.com/atheophotography
Meet the artist: Thursday, September 8th, 6:30pm-8.30pm. For opening hours call 020 7487 5060.