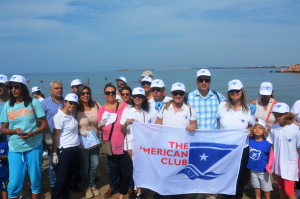 From the Clean-up: members of the American Club, HELMEPA and friends

The American Club’s Manager’s Piraeus team, with the support of HELMEPA, brought Members and high ranking executives from the Greek Shipping community together for the first beach cleaning initiative organized by a P&I Club in Greece.

On Sunday, October 2, 2016, the American P&I Club in cooperation with HELMEPA and in celebration and honor of Ocean Conservancy’s 2016 International Coastal Clean-up, attracted over 80 volunteers representing members, associates and executives from the Greek shipping sector, along with their families, for a beach cleaning event at Kavouri beach as a part of the voluntary actions’ campaign of HELMEPA for the marine environment that takes place every September. Beyond taking steps to evidence the difference individuals can make with respect to protecting the marine environment, the initiative will be valuable from a scientific perspective based on the data that was collected by the participants documenting findings from the clean-up. 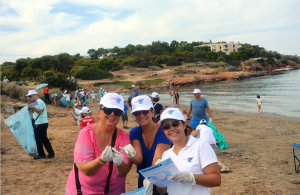 Constantinos Triantafillou, Head of the Environmental Awareness sector of HELMEPA, addressed the participants and stated, “It is a great honor of ours to have The American Club as an associate corporate member of HELMEPA for many years now. The aim is to reduce ship-generated marine pollution and this is an excellent initiative, which promotes the Corporate Social Responsibility idea within the Greek Shipping Community. We are very glad we had this first occasion of doing this now and, based on the record-attendance we see today, we sincerely hope we can establish it as a regular event.”

Dorothea Ioannou, who heads up the American Club’s Manager’s Piraeus Office and is also the Global Business Development Director for the American Club, welcomed all the volunteers and thanked them for their participation in this joint effort between the Club and HELMEPA. Dorothea went on to explain “Working in the maritime industry means we all understand the value of the marine environment, but this type of initiative helps us understand how individual people contribute to its degradation and at the same time how we can all take steps to protect it. We are very proud of this joint effort to take care of our precious coastline and the oceans we thrive on!” 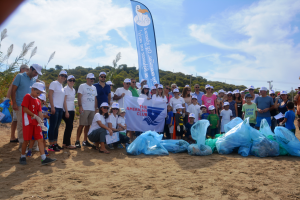 After some hours of tireless efforts filling many bags with trash found on the beach by the volunteers from the shipping community in support of this awareness-raising initiative for the protection of the marine environment, the American Club treated all to a well-deserved lunch at a nearby tavern.