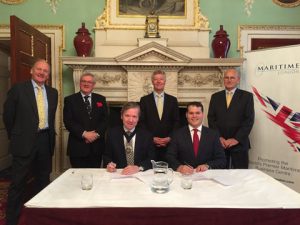 from the MoU signing at Mansion House

Maritime London and the Shipping Professional Network in London (SPNL) signed a Memorandum of Understanding on co-operation between the two associations at Mansion House on the 24th October.

The MoU outlines mutual co-operation between the members of the two organisations towards the promotion and enhancement of London, and the rest of the United Kingdom as the world’s premier maritime centre.

Doug Barrow said: “It is really encouraging that signing this MoU will further cement our relationship with tomorrows maritime business leaders giving more opportunity for them to engage with their future. Whilst many longstanding members of our industries have gained experience over time, that they can share with SPNL members, it is important that the leaders of tomorrow engage and participate in shaping that future. We look forward a closer and more frequent relationship between the members of Maritime London and SPNL”

Claudio Chiste, SPNL Chair (who works at Investec Bank plc) commented, “We’re delighted with the signing of this MoU, which represents a significant milestone in our special relationship. This is a culmination of an established relationship between Maritime London and SPNL (having collaborated since 2010), we have previously co-hosted events together, the last being with the UK Shipping Minister. We are already looking forward to working on our next project & strengthening our relationship, and in turn strengthening our maritime centre. This is why we are working together, our new link-up represents our belief that the future of our maritime cluster can benefit from this model of co-operation between generations.”

The SPNL has its roots in the shipping communities at London Business School, RINA and CASS. The SPNL is not for profit and aims to bring together young professionals working in the shipping industry and based in London to learn, network and socialise.

duisport is expanding its China business