The BDI (Baltic Dry Index) lost earlier on today just two points since yesterday  and stands at 892 points; looks likely further loses will be contained, but, volatility and uncertainty have the last …laugh. Harsh reality, but there you go…

The Panamaxes BPI managed to survive with a mere 17 points plus, now at 1,038 points…

The Container Market remains out in the cold. Ultra CAUTION should be observed.

The Shipyards all over the world need a multiple face-lift, otherwise as in shipping companies, expect another collapse in the Shipbuilding industry which is not just in confusion, is the global confusion!

The WTI as these lines are written stood at US$ 52,39… with a tendency to go a bit above the US$ 53… We reiterate the view that at any cost, we have to see its level just under the US$ 50 mark; anything above that might trigger …“issues”.-

The Dow Jones and the FTSE maintained their good levels; a bit of a drop and a bit of a plus respectively, but still going strong! Would appreciate if you make a note: for the 11th consecutive day the FTSE was up ending today at 7,292.37 !! Can you imagine? Many never even imagined this even in their most optimist dreams.

The Geopolitical front continues to be messy as well as the Global Economy; time for the big change and streamlining as social upturns might be detrimental…

The MIGRANTS issue still dominates the news worldwide, particularly in the Eastern Med and the Aegean Sea. The shameful situation and attitude continues.

Wonder how Mrs. Merkel manages to reduce the asylum seekers in Germany; what’s up there? The MIGRANTS issue is more dominant rather than the forthcoming elections.

The Wars (yes in plural – see previous reports why)  in Syria continue and we see others joining-in the conflict. One thing is for sure: the more this situ is prolonged, the more trouble to be expected even in its aftermath. Having, as said in previous reporting, an entire region from Gibraltar to Afghanistan and from Caucasus down to the Horn of Africa in a mess, this might get off hand and engulf many other regions.  CAUTION. Can you please get rid of the ISIS here and now? The rest is simply blah blah and nonsense.

Turkey is slowly but steadily getting into more mess; exchange of blows in the Parliament, terrorism, blackmail, a downwards economy with the Turkish Lira in tatters… what next Mr. Erdogan? despite all these and his “pacifist” appearance, Turkish jets continue to violate the Greek and European Airspace, naval ships too and he is totally responsible for the ongoing MIGRANTS issue by “sending” them over to Greece and Europe. Enough! Ah! there is the Cyprus too..

The Cyprus talks in Geneva for a square deal leading to complete Peace on the divided island, will continue and wonder all these years, particularly the last 62 (sixty-two), what is the real stumbling block? Those who have the guts must speak out, otherwise like the MIGRANTS saga, its obvious how the Turkish blackmail works supported by the mega powers on the Island with “vested” interest! The EU, the UK, the UN, Turkey, Cyprus and Greece participating in these talks must ensure all is been said to avoid once again another disaster. Boris Johnston, UK’s Foreign Secretary sounds optimistic, lets see…

BREXIT produces a double picture; Chinese flock not just in London, but in many parts of the United Kingdom. London and its tourist industry enjoy a productive and profitable momentum, and it is NOT just the weak pound, as many like to put it over. London calls the shots and despite even the exceptional wintry blast, it is business as usual in all of London’s tourist cluster! On the flip side now, Mayor Sadiq Khan is concerned, in case a muddled BREXIT takes place. Personally I doubt this as the economists they got it all wrong and one can verify my view from the great number visiting this country.  According to the Governor of the Bank of England, who was wise to take a precautious stance, recession didn’t happened and the immediate risks from BREXIT diminished; excellent!

In Greece the bad weather surfaced a few hiccups which shouldn’t have happened, not only to the normal Greeks but also to the suffering MIGRANTS. Those responsible for not having an RWA and a RWAD, must resign; no excuses AT ALL! The Greek saga continues in all fronts and wonder when the Greeks lose their patience with their political leaders and the Europeans who strangulate them. The outcome will be detrimental.

At the other side of the Atlantic president-elect Donald Trump is faced with the  most serious issues any American President wouldn’t have dreamt in his wildest dreams. Something very strange is taking place in the USA! Just imagine what a strong dollar could do to Trump; flatten him out! Expect a long period until the American Bull returns. America and the world will go through a very difficult state. What is pathetic, is the to and fro saga on the National Security issue vis-a-vis the  Russian “intrusion” before and during the election. We have already stated in writing: never to forget Watergate, particularly externally revisited… Now, did I hear you anything with respect Visa for the Cubans… eh! Will the Jones Act continue to be safe under Donald Trump? And what about the Iranian sanctions? 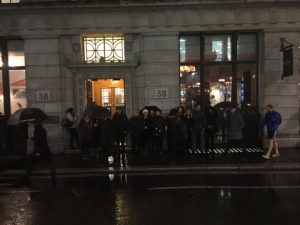 ALBA’s international students at the heart of the Square Mile

A group of international students from ALBA in Athens, Greece, did make their presence felt with their field trip in the United Kingdom. They left Athens full of snow and they …brought same over here…  Their first stop/visit was at the IMO yesterday, their second in Reading earlier on today. “Consolidation in the shipping industry: the way forward?” A very interesting presentation there by Dr. George Alexandridis at the University of Reading, ALBA’s partner institution for its dual degree program,  the MSc in International Shipping and Finance! The shipping students had also the chance to have a trading simulation session at the prestigious ICMA Dealing room, thanks to Dr Ioannis Oikonomou! Afterwards we met them and their group leader Spyros Vougious at the heart of the Square Mile for a coffee and a chat on the shipping business  history of the City, current maritime affairs and employment. Due to the rain and snow fall that followed, we aborted a walk around the City’s main building and shipping institutions; hope same happens some time tomorrow – weather permitted… Tomorrow they will be visiting the GSCC at the Baltic and Howe Robinson shipbrokers. 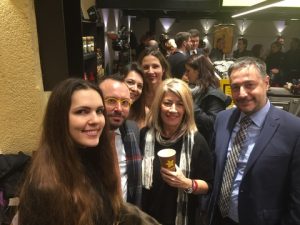 For those participating the Coffee Island’s grand opening at 5 Upper Saint Martin’s Lane off Leicester Square, enjoy the rest of the evening; have a break everyday at the Coffee Island. Remember, coffee is at the end of the day a Greek affair… AND a shipping one – just think of its safe carriage  by ships with exceptional logistics/  set-ups, filling all the World’s mini markets, corner shops and indeed the super market. No day goes by on board and ashore in office or at home AND at the thousands of coffee shops without a coffee. An excellent event thanks to the tip we had from PRMEDIACO’s Sofia Panayiotaki and her team where members of the Konstantinopoulos family and their field/group coffee specialists presented us their brands and making  / serving techniques and other products. Small world too, given that the architectural construction and lay-out design was done by our good old friend’s Elias PrezerakosERGON Build and his London Associates. Over 150 guests and many journalists defying the adverse weather conditions attended the event, including the Consul of Greece Sotiris Demestichas, a few members from the Greek shipping and banking fraternity of London and many many others of the United Kingdom’s Greek diaspora!  We will revert with a full story. 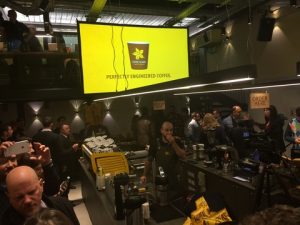 Have a nice evening and as always be on guard for any eventuality given what takes place around the world.

FEMETE supports the Boarding Program of Maritime Cadets in Tenerife