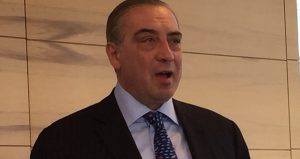 Operators of the global fleet of tankers have grounds for market optimism – although they should restrain any impulse to order more tonnage.

This was the message from Nikos Tsakos, chairman of Intertanko, when he addressed a meeting of the International Maritime Industries Forum in London on February 24 2017.

Dr Tsakos said that more than 70% of the business of independent tanker operators was long term and this “makes us worried but profitable. From here, the market looks profitable,” he said, in the light of forecasts for the import needs of China and India. “At the same time, we have the lowest global order book in recent memory.” 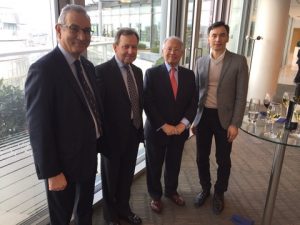 from the pre-presentation buffet luncheon; on a l to r: Lambros Varnavides from Lloyd’s Register Foundation, Timothy Clark from the Japanese Shipowners’ Association, Rt (Radm HCG) ), Secretary-General Emeritus of the IMO and currently at Tsakos Shipping Efthymios E. Mitropoulos and Adam Corbett from Tradewinds

The event, one of the best attended of recent IMIF functions with an attendance of 40 marine operators, financiers and lawyers, was in the conference room of Norton Rose Fulbright on the ninth floor of 3 More London Riverside, with its wide views over the Thames scene.

Dr Tsakos, leader of the international Association of Independent Tanker Owners since 2014, addressed meeting on the state of the tanker sector with his customary plain speaking and wit. He is founder and chief executive of Tsakos Energy Navigation (TEN), the longest established Greek-related shipping company to have a stock market listing.

He said that the freight market fluctuated “like a marriage” with only short periods of joy over the years (and was quick to add that this was not a reference to his personal relationship). His slide on VLCC rates since 1999 was a jagged landscape of highs and lows, with the latter dominating. Rates have risen and plummeted more than ten-fold within weeks. 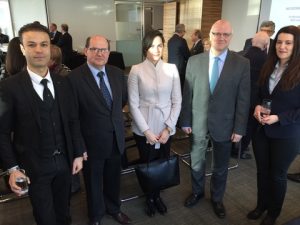 He said that oil demand growth was another fluctuating factor – in 2015 it was up 2% a year, while in 2017 it was forecast to be around 1.4%. “The business is still growing, not as fast as it used to be, but it is ours to lose,” said the Intertanko chairman. “Today shipping stocks are priced like it was a Black Friday,” he said, referring to the annual retail sales frenzy on the day after Thanksgiving. “All shipowners get together and think ‘tanker.’ I promise no more [orders]… I have not had one for six months. And then they run out of the room, they order more, and the chain reaction starts, and your brokers start quoting you.”

Dr Tsakos offered a brief overview of the history and role of Intertanko, which was established in Oslo in 1970. Membership had grown to businesses controlling 330m dwt, or 3,729 vessels. This corresponds to more than two-thirds of the independently owned tanker fleet. 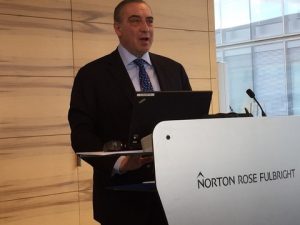 Greece is by registration the largest constituent, with 62 shipping companies, managing 769 ships.

In the last two years Intertanko opened its doors the gas sector and a flood of new members joined. The association’s main focus is on safety, the human factor, the environment, operations vetting “and we have brought back into the picture commercial sustainability.”

Dr Tsakos praised the young generation in the industry for its international outlook and willingness to co-operate.

In passing, he referred to pressures in several countries to implement protectionist trade policies and said: “I hope this will not be true.” 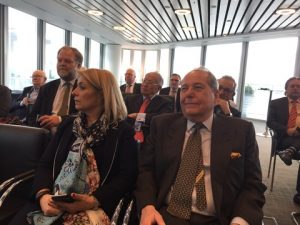 He was in favour of “a market that allows us to plan growth.” The lesson should be heeded of the fashion for super-eco ships, when “everybody ran to buy ships, and destroyed the market.”

During a lively question and answer session, Dr Tsakos said: “We need to keep expectations down. We have had a near 10-year down side with spikes from earnings of $300,000 for a couple of days, then it is down to negative.”

In regard to the Ballast Water Convention, from his company’s point of view he was sceptical about exhaust gas cleaning systems known as scrubbers. “This is not the way to go. We expect the oil providers will be there to provide the right fuel we have to burn. I think that will take some of the marginal business out of the market.” 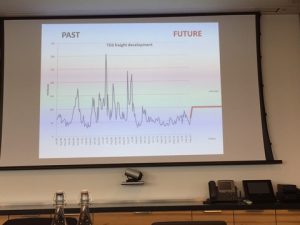 He concluded with a flourish, issuing an appeal to “make tanker rates great again,” a rewording of a favourite phrase of US president Donald Trump,.

His company, TEN, is one of the largest independent transporters of energy. It controls a fleet of modern crude, product and LNG carriers totalling 7.2m dwt. Listed in New York and Bermuda, the company is Bermuda-incorporated and managed from Athens.

He focused on replies to the survey question: are current market conditions generally positive for the shipping industry?

Mr Theochari said that in 2014, 69% of respondents were confident and positive about prospects. This fell to 33% the following year. In 2016, sentiment fell further, with 85% taking a negative view. Most respondents were concerned about over-supply of tonnage, followed, to a lesser extent, by economic uncertainty and financing. 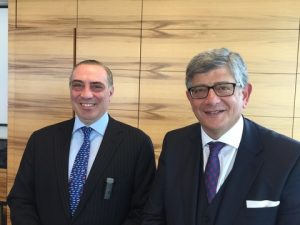 The speaker with the host Harry Theochari

Despite the 2016 survey revealing that only 15% found market conditions positive, what was the response today? “Buy more assets.  I suppose only a shipowner’s brain can understand that,” said Mr Theochari to laughter from the audience.

In the 2016 survey, the few respondents who regarded current market conditions as generally positive attributed their confidence to the emergence of new market opportunities, the impact of infrastructure improvements and improved economic conditions in key markets.

The number of routes and services offered would rise, according to 35% of the sample. Only 22% believed that funding would become more readily available and 64% expected that the number of enforcement actions would increase as lenders sought to protect their positions and recover losses. Most (68%) expected fuel costs to rise.

At the IMIF meeting, Mr Theochari thanked Dr Tsakos for his brief but wide-ranging presentation. Members of the audience thanks Mr Theochari and his colleagues for their welcome and hospitality.