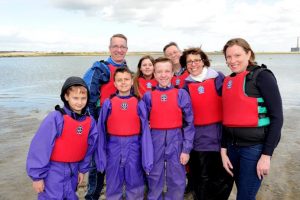 Sports Minister, Tracey Crouch MP, with members of Medway Watersports for the launch of the Watersports Participation Survey

In total, over 14.3 million people (27.3% of UK adults) participated in any water-based leisure activities³. With an increase of 2 million more participants in 2016, it is the highest volume of participants recorded since pre-recession (14.4 million in 2007). It includes participants of the 12 core boating activities and growing watersports activities, as well as activities such as sea angling and coastal walking.

The research also found a substantial increase in the number of younger people (aged 16-34) classed as boating ‘enthusiasts’. All participants are looking for opportunities to get active on the water throughout the year, with increasingly popular pursuits including small sailboat activities, yacht cruising and stand up paddleboarding. This appetite for manageable and flexible pursuits is reflected in boat ownership trends with households across the socio-economic landscape downsizing or taking up ownership of smaller boats or watersports craft.

The launch of this new research coincides with an inspiring, fun-filled event at Medway Watersports, Gillingham attended by Parliamentary Under Secretary of State for Sport, Tourism and Heritage, Tracey Crouch MP. The Minister said: “With our glorious coastline, rivers and canals, the UK is one of the best places in the world to get out on the water.

“Activities such as rowing, windsurfing and canoeing are great ways to keep fit and have fun.

“Our marine organisations and businesses are helping to drive up participation rates and I am particularly pleased that so many young people are getting involved and taking part in watersports.”

Shift away from seasonal participation:

The proportion of participation in any boating activity across the spring, autumn and winter months all significantly increased in 2016 (+5%, +4% and +1% respectively). With a quarter (25% in 2016 compared to 20% in 2015) of boating participation now taking place in spring (March-May), despite experiencing a lower average seasonal temperature in 2016 (-0.17c) and a decline in the rate of participation across the historically popular months of summer (-14% in 2016), it appears that more people are looking for opportunities to get out on the water throughout the year.

In 2016, canoeing remained the most popular boating activity with 1.5 million UK participants. Similar activities including small sailboat activities, yacht cruising and small sailboat racing also saw an increase in participation in 2016 (500,000, 362,000 and 166,000 participants respectively). Motor boating remains one of the top three most popular boating activities in 2016 (495,000 participants), although motorised sports such as canal boating and power boating faced tougher times, with a decline in the percentage of UK adults participating in these activities (of -0.2% and -0.1% points, respectively).

Across watersports activities, the biggest growth in the percentage of UK adults taking part in a boating or watersports activity was in the ever-growing trends of kitesurfing, stand up paddleboarding, bodyboarding and surfing (+0.4% points across these activities or an increase of 275,000 participants). Stand up paddleboarding enjoyed the greatest increase within this segment (with growth of +0.3% points or 176,000 participants).

There is already an upward trend in UK adults choosing to participate in boating activities in the UK rather than abroad across all water-based activities, which continued to rise in 2016. For the first time in recent years, we have seen a higher proportion of UK adults participating in water skiing and using personal watercraft in the UK than abroad (+18.3% and +27/9% in the UK vs. -19.2% and -20.8% abroad respectively).

As Howard Pridding, Chief Executive Officer at British Marine, explains: “It is great to see young people being inspired by boating and watersports and taking up opportunities to get out on the water throughout the year. Whether it is the ever-growing enthusiasm for stand up paddleboarding or the continually popular sport of canoeing, these activities are proving an enticing way to get more people exploring the world of boating.

“We are confident that many people will continue to turn to the array of boating and watersports pastimes right on their doorstep as a great way to keep active and have fun with family and friends. We already see more UK adults participating in watersports activities at home, here in Britain, than we do abroad, and in the last year alone we have seen a significant shift in the majority of water-skiers and users of personal watercraft choosing to participate in the UK than overseas.”

To find out about the boating and watersports activities in your area visit the following sites:

Capt. Antonio M. Padrón presided over the Boards of Examiners for Deck Officers at the Nautical School of Tenerife