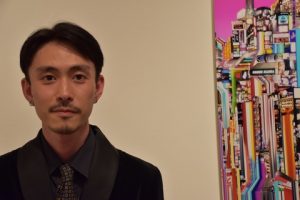 Adopting its title from a computing function, this is an art exhibition decidedly of the techno-age. Dimensions of what is on display are measured in pixels rather than centimetres, and the artist’s chosen medium is variously animated gif, loop, video collage, or an image resolution such as 3840 x 2160 (4K).

Japanese-born Shigetoshi Furutani, who is in advanced art studies in London, is a brilliant exponent of digital art, to which he brings across skills honed by print-making and figurative painting. 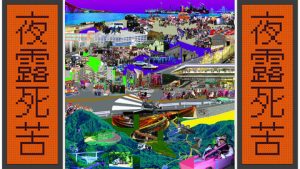 Hard to memorise, the title for his first solo exhibition in London is nevertheless memorable. He calls it var i = phenomena; var x = future; for (i < x) {i++}.

The ‘var’ function is used to compute the variance of a matrix column, based on a sample. The computer-literate will be able to identify the further programmed terms. Here the whole sequence “denotes phenomena that will be exponentially continued until they become the future.”

This exciting cornucopia of up-to-the-minute adventures in new media is to be seen at the Cornwall Terrace headquarters of the Daiwa Anglo-Japanese Foundation, opposite Regent’s Park.

Extracting advantage from the plasticity of technology, Shigetoshi’s works are readily accessible and full of expressive idiom, a vision withal of what he refers to as the “merry-go-world” (he is a whizz at English-language puns). 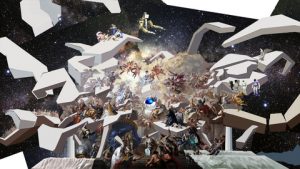 The Trifle of the Immaturity © Shigetoshi Furutani.

He ranges over themes as disparate as the mayhem of the mind and of the megalopolis, Japan’s motorbike gangs, and our subconscious reactions to the programmed loop.

Some tableaux are reminiscent of the intricately-populated cityscapes of Royal Academician Chris Orr, whose fascination with London and other capitals questions the physical and social nature of the modern city. Shigetoshi’s accounts of Tokyo are packed with claustrophobic detail, especially when it comes to skyscrapers – and we all know that it is becoming ever harder to breathe in the modern metropolis.

Through the cyber-lens, there is much to read into the concepts of var i = phenomena; var x = future; for (i < x) {i++}. In the words of the artist, this is an exploration of “methods for visualising social and personal phenomena, which do not have a conventionally recognised form.” He wants “to develop responses to limitations of language and expand the expression of two-dimensional form in an age of social media, and engages with the limits of chaos and order, generative-ness and restriction.” 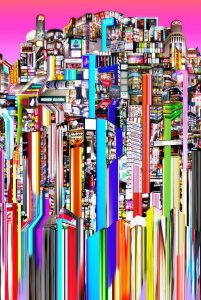 In practical terms this involves digital drawing, using his own photos, and editing collage from ‘found footage’ including science videos, films, Japanese movie and television animation, computer games, advertisements and YouTube excerpts. He transfers some of the results of this melee of technology sometimes to giclée prints on etching paper, sometimes with glue and ink on hologram paper. Modified by the computer process, order emerges from the disorder, intensity and ferment of city life.

At Daiwa Foundation Japan House, one room (the Parkside Gallery) for this exhibition is devoted to these two-dimensional, tumult-filled prints. The fluorescent colours of Tokyo create a mosaic where it is hard to distinguish the messages that the stores and advertisers are consumers to follow. “It means they have lost the purpose of making signs, but at the same time, I realised that this phenomenon has made an individual image of the city. I was drawn by the point that a new entity has been born unexpectedly when many disparate components were unintentionally combined,” says Shigetoshi on his website (www.shigetoshifurutani.com) 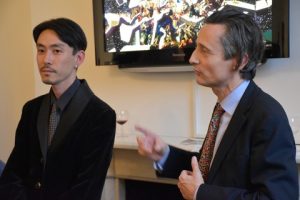 The artist and Jason James of the Daiwa Anglo-Japanese Foundation. Photo by Suzanne Hennie Tennes.

Compulsive viewing is a loop animation, Champ Lord, which has an urban landscape criss-crossed by Japanese teenage motorbike gangs of the 1970s and 1980s known as Bousouzoku. On the left and right of the piece are Japanese written characters with dark connotations which are pronounced yoroshiku which means hello or nice to meet you, but is an expression used by the gangs at the end of sentences, such as “I never lose a fight! yoroshiku!” The aggression of the bikers comes over clearly, although the style of animation could call to mind the Beatles cartoon movie Yellow Submarine.

Another loop animation, The Trifle of the Immaturity, has something of a Western religious aura. It turns out that this title is another pun, and the work is a reworking of the painting The Triumph of The Immaculate by Paolo De Matteis (1662-1728). Shigetoshi says that the work is essentially autobiographical. “I consist of many different experiences, all of which are battling to have a part of my personality. One thing may take prominence for a while, but soon another thing will take over… I found that the narrative of the painting had similar concerns to my own introspections.” 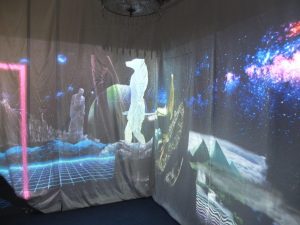 Part of the installation Goal of Duty © Shigetoshi Furutani.

In the second room (the Mews Side Gallery) one enters a darkened arcade of installations inspired by Disney World, or Dizzilyland in Shigetoshi’s terminology. Here, we are at a technological crossroads: just as the internet is without borders, images repetitively shift on eight video screens and wall projections in this time tunnel, amid discomforting and alienating sonic pounding. We glimpse the Parthenon, an Egyptian deity possibly Seth the god of evil and war, and other digital personae.

Meticulous in the finish of his ‘canvases,’ the artist is generously creative and is dexterous in his draughtsmanship. This is a polished convergence of electronic and conventional craft.

Jason James, director-general of the Daiwa Anglo-Japanese Foundation, welcomed to the private view evening a crowd of art enthusiasts including Shigetoshi’s colleagues from the Royal College of Art.

Born in Mie, in the Kansai region of Japan, Shigetoshi worked as a TV set designer in Japan before focusing on his work as an artist. He is completing a two-year MA in printmaking at the Royal College of Art, with a grant from the Nomura Foundation.

He gained a BA in Design and MA in Environmental Design from Tokyo University of the Arts, and has an impressive list to his credit of exhibition participations and awards. Among other successes, his work was represented in 2016 in the Athens Digital Art Festival and at REThink Art Digital Festival in Rethymno, Crete.

On Thursday April 27 2017 at 6pm at the Foundation premises, Shigetoshi will be joined in conversation by artists  David Blandy and Lewk Wilmshurst to discuss his work and practice.

Admission is free to the show, which continues until May 18 2017 at the Daiwa Anglo-Japanese Foundation, 13/14 Cornwall Terrace, London NW14. www.dajf.org.uk

He Has Risen, but not the …BDI…