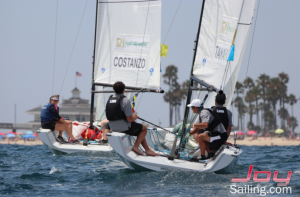 However, with nine races to go in the second round robin, no one’s place in the all-important semifinals is secure, with the possible exception of Price. Two veteran GovCup sailors are two points behind Killian’s 11-2 record – New Zealand’s Leonard Takahashi and prior Governor’s Cup semifinalist Chris Weis from Del Rey YC Marina del Rey, California both on 9-4. Takahashi had a poor first day and said, “Our pre-race tactics and decision-making were not as good as we’d like, but we had a debrief last night and we did a lot better today.” They did indeed.

Close behind Weis and Takahashi is Will Boulton of Perth, Western Australia, who would certainly be considered “most improved” from his first GovCup appearance last year when he finished last.

Again today there were a number of close races including the race between Price and Killian, which was decided by one boat length. And jas was the case in the first round robin, Price’s first race in the second round was against the youngest competitor in the field, 16 year old David Wood, also a BYC entrant. As with yesterday’s match between the two, Price held a slim lead at the second windward mark, but lost the lead on the last downwind leg to the fnish. Nonetheless,
Price was impressed, summing up the race by saying, “That kid is good!”

Thursday’s action will include the continuation of the second round robin with conditions expected to be similar to today – early races in 6-7 knots of breeze and afternoon races with wind up to 12 knots and a light chop on the Pacific Ocean race course off Newport Beach. Friday will conclude the Round Robins, and the Semi-finals will then get underway among the top four teams. The winners of the Semi-finals will advance to the Finals on Saturday. The rest of the fleet will race for the other positions with the 5th place finisher sailing against the 6th, and so on.