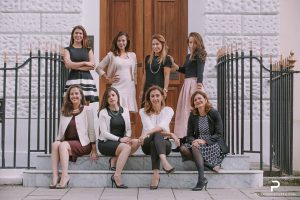 The Greek International Women Awards (GIWA) have been created to recognize and reward the internationally distinguished professional achievements and outstanding performance of all women of Greek nationality and/or origin, who are spread across the globe. The GIWA ceremony is the highly anticipated event of the year and will take place for the first time on the 9th December 2017, at the British Museum in London.

The Applications and Nominations period to the GIWA awards platform has been extended until the 30th September 2017 and can be made through the official website (www.greekinternationalwomenawards.com) either through direct application by the interested candidate and/or through nomination of individuals by corporate, companies, associations, organizations, charities or any other legal entity and/or corporations.

Following the closing deadline for submitting an application and/or a nomination, the applications that meet the eligibility criteria will be placed for public voting.  The public voting will last from the 9th to the 30th October and each voter is entitled to a single vote per category. Exact timeline and public voting procedure will be communicated through the GIWA official website and social media.

Upon completion of the public voting process, the five (5) shortlisted candidates per category, that collected the majority of the public votes, will be placed for review and assessment before the category’s Judges. For every award category, a team of three (3) Judges, selected by the GIWA Committee, will decide the winner, among the five (5) shortlisted candidates, in the specific category. The Judges will assess the bio, the motivation letter and/or any support material. The Judges reserve the right to run an interview (live or skype). The three Judges will justify how the finalist candidates meet the winning and awarding criteria.

The GIWA awards are aiming to reward women’s leadership and excellence in their field. For this reason, transparency and objectivity are paramount principles for the entire procedure. With this in mind the Organizing Committee has established stringent rules of conflict of interest in order to safeguard the GIWA procedure.

The GIWA awards are supported by the Greek Embassy in London. 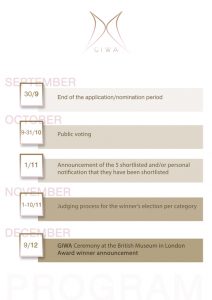