Georgia in her heart: London painter Anna Steinhouse’s paean to her homeland 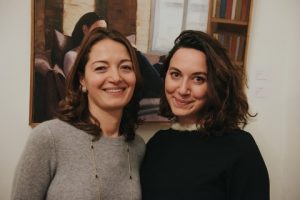 Anna Steinhouse with her daughter Sophie.

Georgia in her heart: London painter Anna Steinhouse’s paean to her homeland

Just four years after first taking in hand paint brushes and palette, former banking sector analyst Anna Steinhouse-Kandelaki is accruing acclaim in London fine art circles. In her canvases there is always at least a little bit – and sometimes a lot – of her native country of Georgia.

In the motherland motif, people and places are ensconced. Her portraits of friends and family often include modestly introduced architectural or sculptural features of the capital Tbilisi, which supplement the representation of her sitters to convey simultaneously reverie and patriotic sentiment. 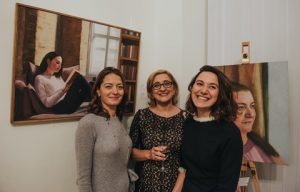 Contentedly settled in London for the past several years, Anna Steinhouse remains nonetheless deeply attached to the culture, traditions and variously tranquil and rugged terrain of the land where she grew up.

She has just been feted for her first solo show, at the Georgian Embassy in London, appropriately titled Home Away from Home.

The exhibition comprised mainly portraits in oils of her British-Georgian family and friends in the UK, and in this way “I wanted to express my love for Georgia and my nostalgic feelings.

“I have very strong connections with the homeland, it is like an umbilical cord,” she says. It is clear that she cannot do anything about it, and nor does she want to.

The individual life stories that inspire her are “bound by a shared passion for Georgia.”

Her overall aim is to arouse curiosity in her viewers about her home country. Especially for non-Georgians, “if they will take a little bit of Georgia into their heart, then my role as an artist is fulfilled,” says Anna.

The purity of feeling is palpable. Her devotion to her classical heritage is expressed in lyrical utterance and her fascination with pattern lends a structural regimen to the compositions. Despite combining the contemplative with the geometric, she by no means overloads the canvas. 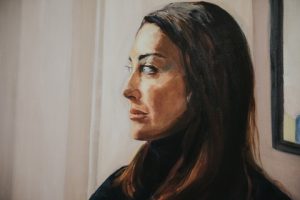 In the depiction of the personalities there is a chaste beauty, and the image reflects the spiritual depths in them she has identified beyond the everyday relationships, thanks to her psychological insights. The result is a generous anthology of Georgian grace of the soul.

Typical of the engaging quality of her luminous and joyous perception of reality is the first work for the Home Away from Home series, a portrait of Anna’s ballerina friend Elena Glurjidze, who was born in Tbilisi and was a pupil in St Petersburg of the great Russian dancer Lubov Kunakova. Elena, who has an extensive repertoire, joined English National Ballet in 2002 and five years later became lead principal ballerina. She now makes guest appearances with many companies. In the portrait by Anna she is seen relaxing on a sofa against two cushions in bold red – a colour of the Georgian flag.

In a canvas of larger scale, Anna portrays her Georgian friend Eka Moniava in her London home, pensively looking out of the window and reminiscing about her homeland. “A distinctive Georgian Orthodox church in the background gives a hint about her thoughts and her origins,” Anna wrote in the catalogue.

Indicated in the picture of David Gigauri, her merchant banker friend who is active in the British-Georgian Society, is one of the landmarks of Tbilisi, the bronze equestrian statue of King Vakhtang Gorgasali, who allied 1,500 years ago with the Byzantine Empire against the Sasanian Iranian hegemony. The ruler was the founder of Tbilisi and reorganised the Georgian Orthodox Church. Included in this study is Georgian-themed masonry of Holy Trinity Cathedral of Tbilisi, known as Sameba, one of the world’s largest religious buildings. 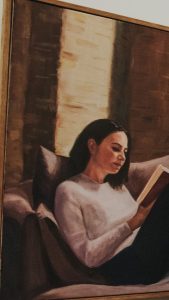 In another portrait, Anna lovingly depicts her daughter Sophie absorbed in a book in her London home. Sophie moved to the UK from Tbilisi with her family at the age of nine, and reading helped her adapt to her new life in England.

A musical friend, Tereza Dgebuadze-Kandelaki, is shown with her viola and is accompanied by a reference to a bronze sculpture by Merab Berdzenishvili (1929-2016). Known as The Muse, the piece stands in front of Tbilisi Concert Hall.

Beyond her immediate circle, Giya Kancheli, the leading living Georgian composer is portrayed, self-confident and authoritative. He is celebrated for his symphonies, film music and much else. Born in 1935, he now lives in Belgium. Addressing him as a subject gave Anna a further opportunity to pursue one of her intents, to fuse music with the identity of herself and others as Georgians.

Anna came to the UK in 2000 on a British Council Chevening scholarship to study for her MBA at the University of Surrey. She went on to work in the banking sector on business analysis with statistical models and other technical applications. 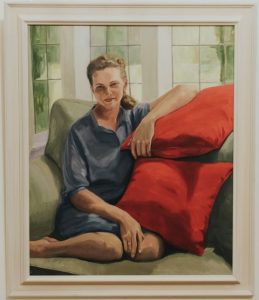 As a child her only artistic expression was writing poems, which were published in newspapers. Between the ages of six and nine, she was already in her verses expressing her love for her native land.

While at that stage not taking up painting, she did admire the work of Nikoloz Kandelaki, the late brother of her paternal grandfather, who was one of the founders of modern Georgian sculpture. Mr Kandelaki (1889-1970) was closely involved with Tbilisi Academy of Art, and in addition to sculpture he has been described as the creator of portraits with strong-willed, energetic characters.

“I was growing up looking at his beautiful paintings and appreciating art always,” Anna recalls.

When she finished her banking career in 2012 she started having short lessons in painting, and then enrolled for a three-year contemporary portraiture diploma at The Art Academy, an independent school located near London Bridge. Her dissertation was on Lucian Freud (1922-2011), a leading British portraitist noted for his psychological insight. Other artists she admires include John Singer Sargent, Rembrandt and Paul Cézanne. 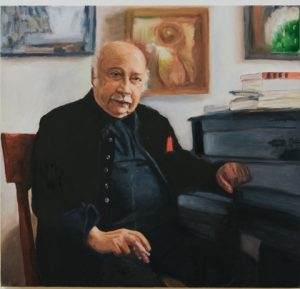 She celebrated achieving her degree in the finals group show and her work was admired by Her Excellency Tamar Beruchashvili, the ambassador of Georgia to the UK and to the International Maritime Organization. Ms Beruchashvili invited her to exhibit at the hub of the Georgian presence in Britain, the embassy in Kensington, which she did in mid-December 2017.

Although Anna feels comfortably at home with portraiture – “portraits give me more satisfaction in terms of capturing the character of the subject” – she would like to spend more time on landscapes. “I think it is time to paint some landscapes of Georgia,” she says, and will derive further stimulus for this during her visits to the Caucasian state. In the country’s topography she seeks the serene balance between the mountains and the meadows, alert for fleeting moments of beauty that otherwise would go unnoticed. 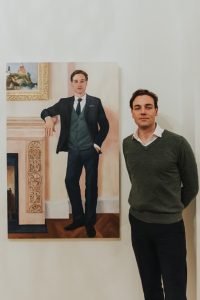 One of her first landscapes, Spring in the Caucasus, features meadow flowers including tall poppies. Poppies she sees as a symbol of fallen soldiers in the many conflicts over the years in Georgia. “These flowers are so beautiful and so fragile.” Another landscape is Autumn in Georgia in which rustling waters caress fall foliage.

In her so far brief but productive painting career, Anna has been commissioned by private collectors in the US, the Middle East and Georgia, and the reviews are encouraging. Her paean in paint to Georgia is evoking considerable approbation.

George Laliashvili, London-based art critic of the newspaper Georgia Today, has written that Anna possesses both the necessary technical skills and a precise visual memory. She has unusual insights into the character of her subjects, he said. 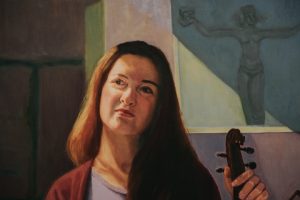 Dorothea Ioannou – on top of what’s trending in P&I