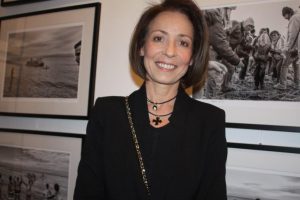 Margarita Mavromichalis-Tziras records with her camera the forces of humanity and the lack of humanity as represented by the fates of thousands of migrants trapped in the holding centres on Lesvos. It is a painful reminder that there are still some 15,000 displaced persons on Lesvos and four other islands: Chios, Kos, Leros and Samos. 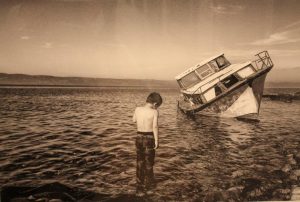 Christine Bory reveals through her lens the extraordinarily variegated lives of the wives of diplomats.

All three interrogate closely their subject matter to bring out hidden layers of meaning. They won effusive praise as the exhibition opened at the Sofia Gallery, in the basement of the Bulgarian embassy in Kensington. 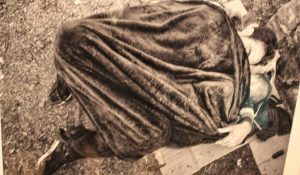 Huddled against the cold.

Margarita presents a series that documents the onslaught of the refugee crisis on Lesvos between 2014 and 2016.  Her black and white images bring out the contrast yet coherence of sea and land in the bitter but as yet incomplete journey of wretched families and individuals via what has been called a ghetto at the edge of Europe.

She seeks to show the compassionate reception of the incomers by local people and volunteers, alongside the struggle for official registration in a way that means they can move on to their ‘port of refuge’ of choice, an aspiration which for many has so far been beyond their grasp. 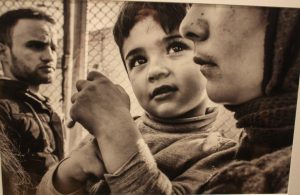 Speaking at the private view on March 14, Margarita said that there can be no borders when it comes to the question of human lives. While she and her husband (His Excellency Dimitris Caramitsos-Tziras, ambassador of Greece to the Court of St James since August 2016) were in Greece in 2015 the refugee crisis reached its peak.

Crammed dangerously into small boats, thousands of people were arriving, cold, wet, exhausted and hungry. The photos on display show desperation and hope at the same time etched on their faces.  For Margarita, seeing conditions on Lesvos “was a huge life lesson. It showed me the good and the bad side of people,” with Greek residents doing their best to give comfort. Locals could relate to what was happening because their forebears had fled from Asia Minor. 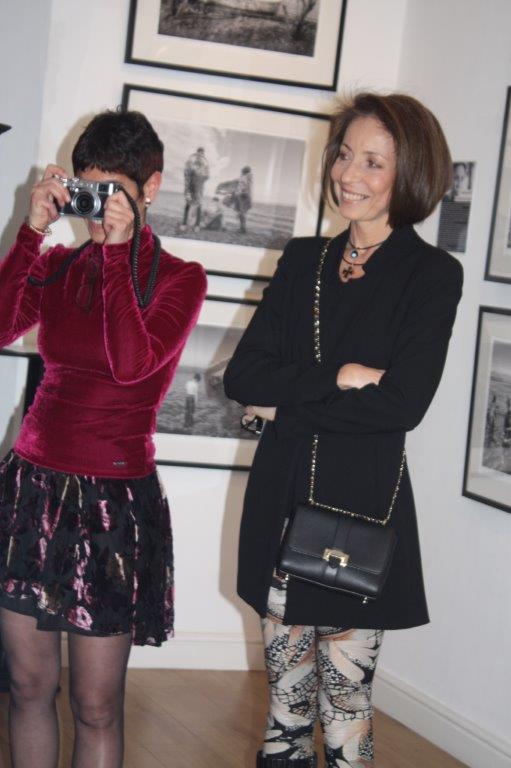 The latest victims had become very permanent residents until the EU decides how to overcome the problem, she said, appealing for the authorities and all people to come together to give each other a helping hand.

Margarita’s monochrome works show graphically the exhaustion and frustration of the refugees, with desolate beaches, dinghies, rescue workers, barriers and fences featuring prominently. Modestly, she says that her images fall short of doing justice to what she has witnessed, but “if I manage to touch even a few people with these images, I will consider myself successful.  There are still too many people out there who will conveniently shy away from this reality.”

Lesvos has become the main migrant concentration in Greece, and there are constant fears that Turkey will allow thousands more men, women and children to cross the Aegean, squashing into the camps and landing additional burdens on communities in Lesvos and other islands.

In 2017, according to Greek government figures, a total of 29,000 asylum seekers entered the country, although numbers attempting the crossing across have fallen. People come from Iraq, Syria, Pakistan, Bangladesh, Eritrea and sub-Saharan Africa.

Europe as a whole saw more than 163,000 migrants and asylum seekers arrive by sea in 2017, the number swelled towards the end of the year by civilians who had been trapped in Mosul and Raqqa by Islamic State. More than 62,000 migrants are stranded in Greece. In Lesvos, a protest in July 2017 over the glacial pace of dealing with asylum requests resulted in violence at a compound at Moria, a short distance from the port of Mytilini, into which were packed 4,600 people, three times as many as had been planned. 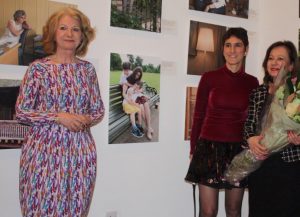 A leading article in The Times of London on January 2, 2018 referred to “conditions of desperate squalor. Children walk barefoot next to open sewers. Whole families cower from the weather in tents meant for pop festivals. Women wear nappies rather than risk being raped on their way to their refugee camps’ overwhelmed latrines at night. This is not the solution to the European refugee crisis that Brussels’ £2.5bn deal with Turkey nearly two years ago was supposed to represent.”

Margarita Mavromichalis comes from a family of diplomats and has travelled widely. She lived in Los Angeles for four years before moving to New York in 2009, later returning to Greece until 2016. She has studied and been a teaching assistant at the International Center of Photography, New York. 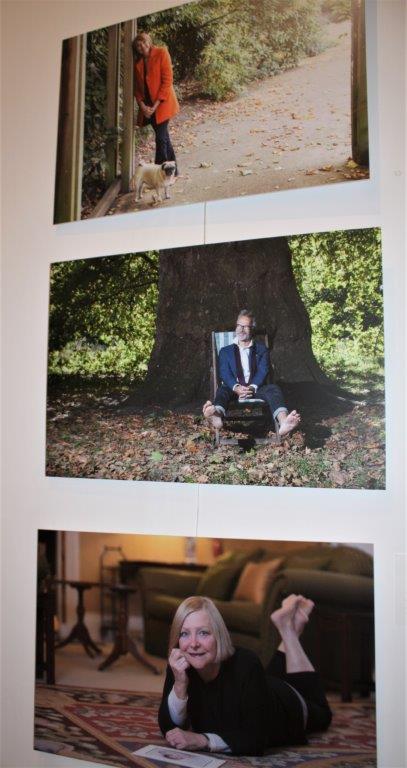 Her website says that she “is passionate about documenting current events that she feels very strongly about, highlighting their social impact.” She told guests at the Sofia Gallery: “I speak five languages, but I hope the sixth is photography and it is the most important language.”

Christine Bory, who is married to the ambassador of Luxembourg to the UK, said that her photographic studies of spouses of diplomats focused on the question of identity, not just in terms of countries served by each couple but that of people who have a life of their own.

She sought to find out what it takes to be “the follower” in a diplomat partner’s life, a challenging status. Christine asked the subjects of her images to say what it was like to be involved in a lifestyle of many aspects and to share the list of countries to which they have been sent – a long list in some instances.  “I invite the viewer to look beyond the stereotype and open up to another vision of the diplomatic spouse,” said Christine, who said that as her project continued, a sense of continuity emerged in connections which resonated as the diversity of experiences.

Montreal-born Christine has lived much of her life in France and Luxembourg. Whilst studying arts and photography in Metz and Paris, she co-founded and presided over the artists’ support platform Association Croq’Arts, and in 2017 she co-founded a similar organisation in London.

Silviya (https://sellvida.com) is devoted to artworks in collage, or as she puts it, “piecing together memories and extracts of her experiences on a canvas of colours, textures and shapes.” Her compositions exude confidence in this melding of mental and visual concepts, some of which she has symbolically figured as wall clocks. 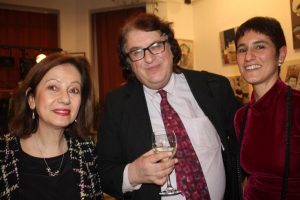 Inspired by her artist father Stefan, and educated in Sofia, where she mastered in textile and graphic design at prominent universities, she has brought a rich background to London.

Here, she says that she views this beloved city through her “positive and curious eyes – the power stations of Battersea, sunset in Fulham, a stranger’s demeanour.” Silviya says that she is equally intrigued by the man-made and the natural – from seascapes to still life settings and Parisian rooftops.

She has launched a contemporary porcelain jewellery line, branded MIS LAB 2106: lab referring to a laboratory where ideas combine and morph into something fresh and new. “My mind wonders, mixes and creates ideas, just like I am in a lab.” For this inspiration, she again pays tribute to the influence of her father, a master of ceramics. 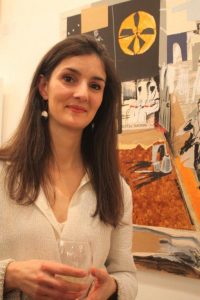 Margarita, whose website is www.margaritamavromichalis.com, said that she was delighted to be showing work at the Sofia Gallery, as earlier in her career she lived for eight years in the Bulgarian capital, and the country was close to her heart.

She was intrigued to see the women portrayed in the photographs of Christine, because she agreed that the role of wives of ambassadors had been greatly underestimated.

Among those lauding the contributions of the three artists were Nadya Dimitrova, wife of the Bulgarian ambassador Konstantin Dimitrov, and Svetla Dionisieva, director of the Bulgarian Cultural Institute London since its creation in 2010.

Gabriela Abado, deputy director general of the International Centre for Migration Policy Development, offered a moving testimony of the plight of refugees globally. The Vienna-based representative of the inter-governmental body said that there were 250m refugees worldwide, half of them women facing the gravest risks. 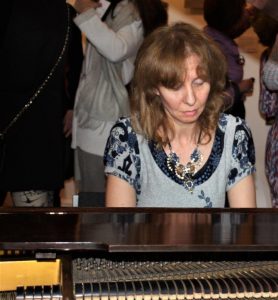 The object of the migration policy centre, of which 15 states are members, is “to promote innovative, comprehensive and sustainable migration policies and to function as a service exchange mechanism for governments and organisations.”

There was further entrancement for the gathering as the pianist Savelina Kancheva, known professionally as Sally Wave, offered sparkling interpretations of works including prelude no 4 by the prolific Bulgarian composer Svetoslav Obretenov (1909-1995), and pieces by Chopin.

Savelina has a successful teaching career in London and is the founder and musical director of the Wimbledon International Piano Competition, to be inaugurated on June 23, 2018. She studied at music academies in Bulgaria and in Weimar. 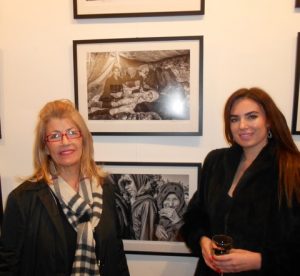 She tells of growing up in an apartment by the shore in the port city of Bourgas, where she loved the view from her window. She has written: “When I’m away from the sea I look at the glowing moon and imagine how its silvery beams plough a swaying path across the sea.” More of her charming stories are at www.sallywave.com

In line with the cross-national and cross-cultural themes of the event, there was a representation among the guests from a huge range of interests and nationalities.  We counted, for instance, a strong representation from the Greek community – the embassy, embassy press office, consulate and so on.  We spotted Chrysanthi P Lemos from Life Action Trust,  Dr Evelyn Stefanakis, Pavlos Horn, Makis Peppas,  Eleni Malatou, Antonis Katepodis commercial councillor from the embassy and his wife Mary Monogioudis, , Chrysanthi T. Leventi also from the economic and commercial affairs at the Greek embassy, Elena Soupiana the Press Councillor at the Greek Embassy heading her team – Nancy Andriopoulou, Petty Syriopoulou and Alkis Delantonis; Alexia Martzakli, Fersa Varouti and Eleni Galani from the Greek Consulate; John and Mary Theodorides, Antiquer and Gallerist Maria Antypas – president of the Ionian Society of Great Britain, George Hatzzioannou, Anastasia Pritsou, Angelika Kavouni,  Elina Pothitou, Elia Rigas, Agatha Kalisperas director at the Hellenic Centre,  Chantal E. Mitropoulos,  Anastasia Spanopoulou, Clara Poulantza, Katerina Jefferies, artist Uta Bruet and several others. 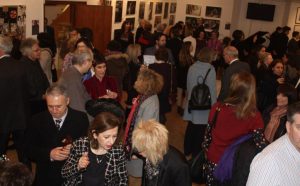 Enthusiastic crowd at the private view.

We should add that a full CV for Margarita Mavromichalis would require another copious article here.  Suffice it to include among her achievements the presence of her work in exhibitions in New York, Boston, San Diego, the Museum of the City of New York, the Brooklyn Historical Society Museum and most recently at events in Budapest, Athens, Paris , Berlin, Barcelona in addition to London, where she was a participant in the Frieze contemporary art show.

Savelina teaches piano for my son. We’ve been doing classes with her for about 2 years, and we never knew she could be this great, we have never doubted her. We both find her a skilled, talented musician and a pleasure to work with and have her as a teacher. This is the greatest opportunity for your child to do well and succeed in the music industry, I am glad we chose her.