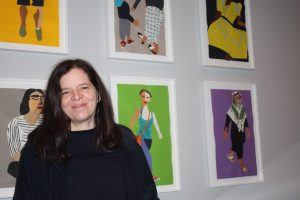 Contemporary art has gone mainstream and mainline for London. City and public sponsors have joined galleries in the metropolis in unveiling full details of a huge new art project that will be seen daily by millions of commuters and visitors to the capital. The resulting creations are bold and historic and most importantly they are accessible in every sense – in their content and their visibility. On our daily travels, we shall be unable to miss them. 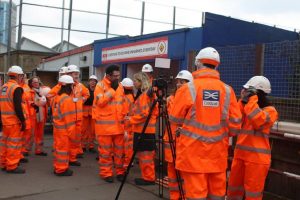 Preparing to descend to new line at Whitechapel.

Tailored to embellish London’s newest railway, a 118 km link built as the Crossrail project and dubbed the Elizabeth line after the long-reigning monarch, signature public artworks have been launched by internationally renowned artists. The designs have gone on display in Art Capital: Art for the Elizabeth Line which has opened at Whitechapel Gallery, which happens to be next door to Aldgate East underground station and 15 minutes’ walk from what will be from December 2018 the Whitechapel station on the Elizabeth line.

Each artist was commissioned by the Crossrail Art Foundation, a registered charity, to create a work of art sympathetic to the locality, history or function of a station, to form a string of “cultural interventions” across central London. 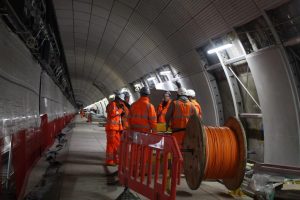 Curated by Whitechapel Gallery in partnership with Crossrail, the exhibition catalogues sketches, maquettes and prototypes showing the concepts of each artist.

Overall, the project is “the biggest and most significant art commission of our age, [ranging] from pure abstraction to the wonderful figurative paintings of Chantal Joffe,” said Iwona Blazwick, director of the Whitechapel Gallery. 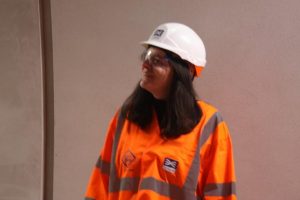 Clad in high-visibility workwear, helmet and boots, Chantal Joffe joined Iwona Blazwick and journalists including your correspondent, on a tour 30 metres below ground of the panels in the east London station, which will be home to her large-scale works, as construction teams beavered away with their tunnelling tasks.

Entitled A Sunday Afternoon in Whitechapel the form of Chantal’s contribution is, she said, inspired by Henri Matisse. It is in line with earlier expressive portraits she has turned out of women and children, often on very large scale, sometimes as high as 3 m. Some of her paintings are so large that she needs scaffolding to work on them in her warehouse studio. 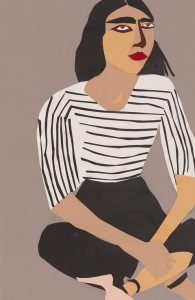 Study for A Sunday afternoon in Whitechapel 1. Copyright Chantal Joffe and courtesy the artist and Victoria Miro London.

In the gallery exhibition are seen six small-scale oil on cut-out paper collages and oil on thin sheets of aluminium preparatory to the 20 “monumental portraits which will immortalise the people of the East End,” as Ms Blazwick put it, adding that it was marvellous to see such an injection of colour, and the anatomy of the human body.  The small collages will be digitally enlarged to 2 m high and transferred to laser-cut aluminium for fixture to the arching platform walls.

She said: “It’s exciting that my work will be part of the fabric of London. Part of the challenge has been to develop small, intimate collages into large scale works, and to retain a sense of the personal in a public space. I hope I have achieved this by bringing a sense of intimacy, as well as colour and warmth, into the station at Whitechapel.” 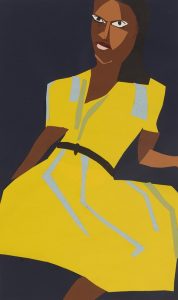 Study for A Sunday Afternoon in Whitechapel VII. Copyright Chantal Joffe and courtesy the artist and Victoria Miro, London.

The huge public art commissioning process has been executed without dipping into Crossrail’s £14.8bn core budget. The Crossrail Art Foundation raises funds from corporate interests, with each contribution being matched by the City of London Corporation. The foundation was set up in 2014 with support from the corporation to promote art to enhance the journeys of people who will use the line. Backers say that the arts project combines the disciplines and functions of art, crafts, architecture, engineering, transport, civic government and corporate sponsorship.

For instance, the artwork at Whitechapel is supported by London-registered Randeree Charitable Trust and the Art Fund, alongside the corporation.

Whitechapel is the only station in London where the London Overground will run below London Underground lines, with the Circle, Hammersmith and City and District lines also serving the station. Some of the longest metro escalators in Europe will lead down to the Elizabeth line platform. The new station concourse will rise from the High Street over the east-west Underground lines and above the north-south Overground lines before dipping under a road bridge. When the Elizabeth line opens, new air-conditioned trains will depart from Whitechapel station every two and a half minutes, taking only three minutes to reach Canary Wharf and under 40 minutes to reach Heathrow.

Art for the Elizabeth line graphic.

Sir Terry Morgan, Crossrail chairman, said: “When the Elizabeth line opens in December 2018, almost 100,000 journeys will start or end at the new station in Whitechapel. It’s wonderful that this vibrant and diverse community, which the railway was built to serve, will be reflected in Chantal’s beautiful and striking artwork.” 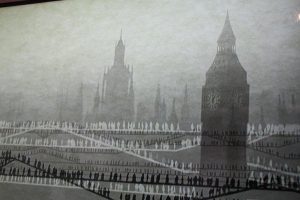 Catherine McGuinness, policy chairman of City of London Corporation, said: “I hope that Chantal’s artwork will bring as much pleasure to those using Whitechapel station every day as it will to the local people whose likenesses have been captured by her. As the UK’s fourth largest funder of heritage and cultural activities and proud of our vibrant City’s cultural offer, we are delighted to support this exciting initiative.”

Stephen Deuchar, director of the Art Fund, added: “Chantal Joffe’s extraordinarily beguiling new work of art captures the many faces of the city and we’re looking forward to it being enjoyed for many years to come.”

Sir Terry praised the “significant contribution” of the City to the ambitious artworks programme, and said: “This fantastic new exhibition showcases the creative ideas of leading British and international artists who are working with Crossrail’s architects and engineers to integrate public art into the very fabric of the new Elizabeth line stations.” It would “be the single biggest addition to the capital’s public art scene in a generation and will cement London’s place as a global capital for arts and culture.” 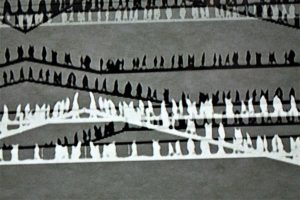 The works will be installed in halls, escalator shafts, platforms, and entrances.

Turner Prize winners Richard Wright and Douglas Gordon are developing artworks for ticket halls at either end of Tottenham Court Road station, lead-funded by Almacantar and the City of London Corporation and co-funded by Derwent London. Rising over the escalators of the eastern ticket hall will be a delicate tracery of intricate gold leaf motifs painted by Richard Wright whose work echoes the geometric and baroque patterns that have ornamented architectural monuments over centuries. An inspiration was the Queen’s House at the National Maritime Museum.

Richard said: “I aim to create something that gives people a sense of enchantment. I want the painting to be delicate and elusive; folding, unfolding and fading in and out with the light and different viewpoints.” 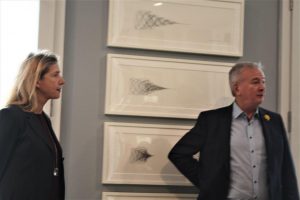 Douglas Gordon is creating neon signs for the western ticket hall at Dean Street, inspired by the 1960s nightlife of its Soho neighbourhood. He said that the work will allude to the area’s ability to recreate itself. “It is vital that Soho’s historic identity should be embedded in its current renewal and this art will help achieve that.”

Crossrail’s new artwork at this station will join the Art on the Underground-commissioned work by French artist Daniel Buren and the famed 1984 mosaics by Sir Eduardo Paolozzi.

An expansive digital display outside the new Canary Wharf station is designed by Israel-born Michal Rovner, who makes films and installations that look abstract but are based on the movement of people and places. She envisages LCD digital screens which respond to the complex architecture and vast throughput of customers at this and other stations. A dynamic flow through “the complex multi-layered ticket halls, passageways, escalators, platforms and trains” is seen in an imaginary iconographic landscape. This project is co-funded by Canary Wharf Group and the City of London Corporation.

Digitally printed onto glass, cloudscapes sketched in pastel by Spencer Finch will make up a 120 m glazed canopy for Paddington station. The American artist has hand-drawn 60 original pastels that combine to create a collage of clouds. When printed onto the transparent canopy it will appear to change according to the light, weather and the time of day. This venture is co-funded by Heathrow and City of London Corporation. 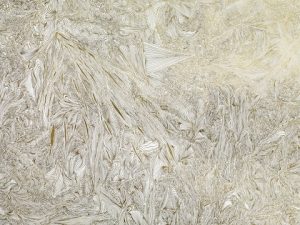 Drawings and architectural plans by Darren Almond who makes photographs and texts about geological, botanical and human time will become bronze and aluminium boiler-plated texts for the ticket hall and escalator areas at Bond Street, evoking historic locomotives and expeditions.

At Farringdon station, artworks inspired by the Victorian metalwork of Smithfield meat market, and Hatton Garden jewellery quarter have resulted in a combination of sinister and subversive mottoes, currently in lacy paper and metal cut-outs made by British artist Simon Periton. Goldman Sachs and the City of London Corporation are funding the largest commission to be undertaken by this artist.

For Liverpool Street, Conrad Shawcross has animated large machine-like structures of metal and wood with lyrical sound, kinetic lights and dance-like movements. He conceives a bronze sculpture outside the western ticket hall at Moorgate, using a machine based on the Victorian harmonograph with two pendulums that draw the oscillation of a sound wave to map the complex shape of a falling piano chord. The Shawcross artwork will be funded by Landsec alongside City of London Corporation. Ross Sayers, development director of Landsec, said that the sculpture “perfectly complements the musical heritage of the nearby Barbican Centre, home of the LSO and the Guildhall School of Music and Drama.” 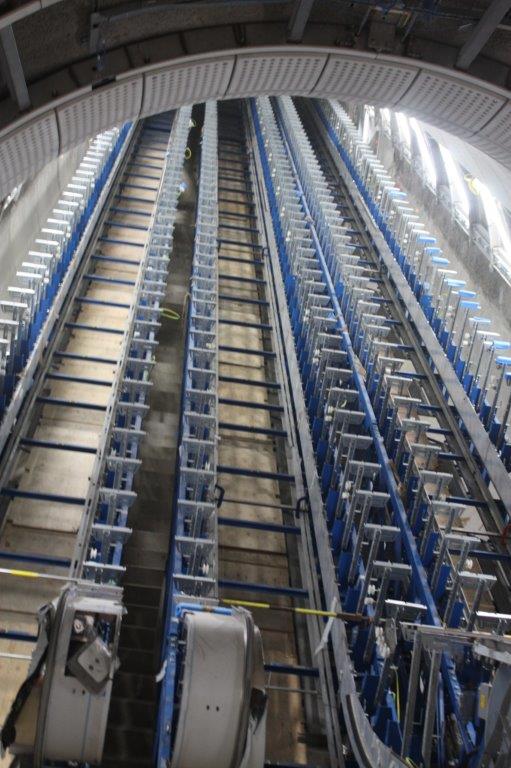 Liverpool Street’s eastern ticket hall at Broadgate will be enlivened by stainless steel sculptures in the vision of veteran Japanese artist Yayoi Kusama, who has been named as the world’s most popular artist in terms of global museum attendance. She is creating her first permanent UK installation, entitled Infinite Accumulation. The work develops her recognisable motif – the polka dot – into a series of flowing, mirrored steel sculptures, each up to 12 m wide and 10 m tall, guiding passengers from outside into the station’s eastern entrance at Broadgate.

The artwork will be funded by the commercial property company British Land which is creating a new mixed-use neighbourhood, Broadgate, next to Liverpool Street station. David Lockyer, head of Broadgate, British Land, said that Infinite Accumulation “will be a fantastic addition to the campus and will further position the wider area as an exciting arts and cultural hub for London.”

All this spectacular subterranean and ground-level public art from British and international artists will be installed as the Elizabeth line delivers the biggest increase to the capital’s transport system in a generation, as Europe’s largest construction project. Crossrail has sought to integrate art into the project from the start. 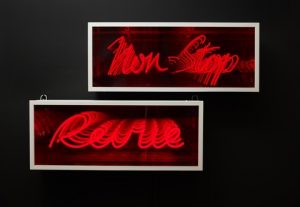 The TfL-run Elizabeth line will run from Reading and Heathrow in the west through central tunnels to Shenfield and Abbey Wood in the east. The £14.8bn railway includes 41 stations, of which 10 are new and 30 upgraded, and is expected to serve around 200m people each year. By December 2019 a fleet of 70 new trains will operate on the completed line.

Art Capital: Art for the Elizabeth line is at the Whitechapel Gallery until May 6, 2018. Website: www.whitechapelgallery.org/exhibitions/art-capital-art-elizabeth-line