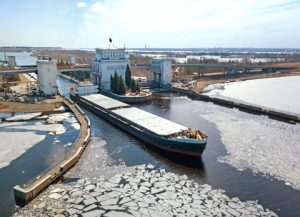 One of the four Volga-Don max ships

Volga Shipping Company (part of UCL Holding) on Wednesday, April 25, held a ceremonial opening of the navigation season on the Upper Volga river. A convoy of four Volga-Don max ships and four pusher tugs towing deck cargo barges have transited the Gorodetsky hydrosystem locks and the vessels are now bound for Cherepovets and the ports of the Onega lake. About 40 more units will join them on the route in the coming week.

In 2018, the Volga Shipping Company’s navigation season began one month ahead of its normal date. The first vessels of the shipping company started operating on the Don river (Rostov-on-Don) on March 2. Navigation season on the Lower Volga (Volzhsky, Volgograd Region) began on April 1.

Volga Shipping OJSC is one of the largest and oldest water transportation companies in Russia which was founded back in 1843. The company transports cargoes along rivers and lakes of the country. In 2016, Volga Shipping carried 5.2 million tonnes of cargo.