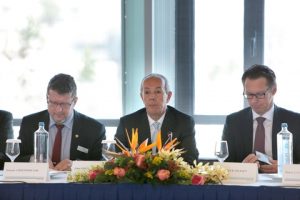 Athens, 17 April 2018 – The annual Greek National Committee of DNV GL gathered once again at the Yacht Club of Greece. The event was well attended with representative from across the Greek shipping industry.

The presentations given, focused on DNV GL update and focus areas for 2018. The Maritime forecast up to 2050, the “path” to a Digital class and Global Sulphur Cup 2020 are some of these focus areas.

Dr. John Coustas, Chairman of the Greek National Committee, took over and announced the speakers of the day, starting with Knut Ørbeck-Nilssen Maritime CEO of DNV GL.

Knut Ørbeck-Nilssen thanked all the participants for their attendance and support. 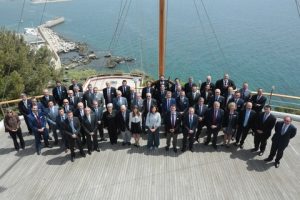 A panoramic view with all participants

He then began his presentation with an overview of the annual status of the organization. Subsequently, he offered the attendees a high-level market analysis and an introduction to DNV GL’s new Maritime Forecast to 2050.

The shipping industry was becoming more complex as a result of its digital transformation he said, and this was shaping the DNV GL’s strategy. By offering a series of digital driven improvements and services, such as electronic certificates, drones surveys and an open digital platform DNV GL was aiming to improve its outreach to customers, become even more productive and efficient, and develop a digital class model.

Following this, Mr. Trond Hodne presented a more in depth look at DNV GL’s new Maritime Forecast to 2050, which gives an insight into the world’s energy future through to 2050. This study provides a long-term overview of how the shipping segments: tanker, gas, container, offshore, are affected by the worlds changing patterns of energy production and consumption. He also noted that a new version of the Maritime Forecast will be released later in the year. Mr Hodne continued his presentation with an update on the current shipping markets. In closing he examined the outlook on LNG supply and market.

Mr. Loizos Isaias presented various aspects of the digital transformation in DNV GL’s daily work and what this new digitalized era would bring for shipping and for ship clasification. He went on to present some of DNV GL’s newly digital class tools, including: My DNV GL, the DNV GL portal, drone surveys, electronic class certificates and other tools that DNV GL is using to modernize its core class services.

Mr Stian Erik Sollied gave a presentation regarding alternative fuels, and how they could help the maritime industry prepares for the 2020 Global Sulphur Cap. After the presentation, a discussion was held where attendees were able to talk to Mr Stian about the solutions and the consequences of the upcoming Sulphur Cap.

Finally, Mr. Christos Chryssakis presented the upcoming action of IMO’s upcoming action on CO2 emissions in shipping in connection to CO2. He ended his presentation with the ISO/CIMAR work and a possible scenario of how things could progress in the near future.

During the presentations, various discussions took place between all participants. The meeting came to a close with the remarks of the Chairman, Dr. John Coustas and Mr. Knut Ørbeck- Nilssen, DNV GL Maritime CEO.

The meeting was declared very satisfactory by all and followed by lunch at the Yacht Club of Greece.