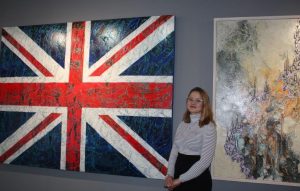 Attempts to isolate Iran politically for these past four decades have had an unexpected result: they have driven forward a dramatically innovative national contemporary arts scene.

The outpouring of creativity is being showcased by a new gallery in St James’s, London. Cama (Contemporary and Modern Art) Gallery sets out to expand international recognition of the wealth of culture that has been overshadowed by the furore over divisive trade sanctions and by bitter rivalry with Saudi Arabia.

Cama is the first gallery in the UK capital devoted to Iranian art. For its inaugural exhibition, an impressive (in quality and numerically) 51 artworks by 19 artists are on display over two storeys. In a sorry illustration of the schism between politicians of western nations and Iran, the UK is said to have denied visas to all artists wanting to enter the country for the launch.

The curator Mona Khosheghbal, also banned from attending, said that the works, “inspired by emotion and perception present each in their own distinct way the concerns of Iranian contemporary artists.” Forward-thinking Iranian artists are countering stereotypes based on ignorance and distrust of Iranian culture.

Aside from disseminating culture through this strong aesthetic, there is a commercial motive, for art buyers are being eagerly courted. The gallery says it has broken through bureaucracy in Tehran to simplify transaction administration and shipping, so that it can capitalise on growing interest in art from the country. Such interest has been exemplified at shows including Art Basel Hong Kong and Art Dubai.  A growing focus on Iranian industry by heavyweight Asian investors is beginning to find a reflection in the art market. President Trump’s travel ban and financial sanctions have backfired in relation to artworks because “people want what they cannot have,” say the gallery directors, who emphasise that in general, art remains one of the safest investments. Many of the works on display in London have already been snapped up, helping make Iranian output perhaps the most sought-after in the Middle East.

Mona Khosheghbal is steeped in the artistic life of her country, with her painting, illustrations for children’s books, teaching, journalism and organising more than 100 exhibitions. 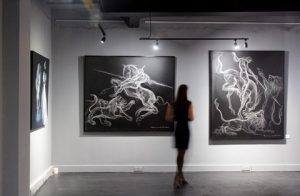 The Battle of Lion and Myth Nos 1 and 2. By Ali Nedaei.

She called the London exhibition Sensation because the concept allowed her to choose a selection that would best showcase the variety of art from the country’s emerging artists. Each piece aims to stimulate the senses of the viewer.

The late British artist Gillian Ayres, who plunged into experimentalism in the 1950s, would ask: “What can be done with painting?” Transiting many idioms, these Iranian practitioners present new and compelling answers. They treat of societal themes, including the contemporary role and treatment of women in society. Some of the images are disorientating, some kaleidoscopic in intricate scope, some draw on myth and mystery, some border on geometric abstraction. Both seasoned and younger artists explore radical styles and genres. 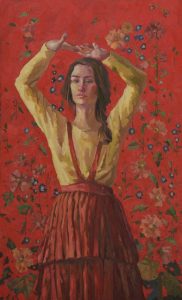 Mona Khosheghbal is enthusiastic about London as a hub of contemporary art and says that modern works from Iranian artists have been well-received there. “London playing host to some of the largest financial firms and auction houses is another reason for choosing this city and our aim to establish a closer cultural and artistic relationship between the Iranian and English partners in the gallery.”

Cama’s statement of “vision and ethos” says: “Our mission is to build a global brand, built purely on the love of art,” but relates that after the crash of 2008, when scores of wealthy individuals were driven to the edge of financial ruin, they were “saved by the most captivating hedging tool in existence: art.”

Amir Soghrati, one of the most prolific of current Iranian artists, contributes an illuminating introduction in the catalogue.  He was born in Rasht, the largest Iranian city on the Caspian Sea. Alongside his output, he has researched cartoon and other drawing, and authored several books. 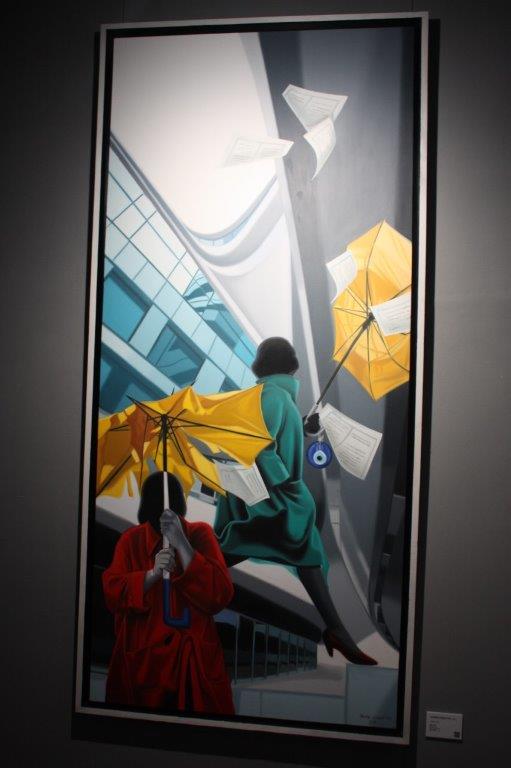 He writes in the catalogue: “In recent years, Iran’s contemporary arts scene has experienced a variety of visual experiments, themselves a product of the transience of existing in a society following the Iran-Iraq war… What can be seen in works from Iran after the Iran-Iraq war, is a deep desire for Persian artists to portray both their joys and pains and the simple pleasure of watching life… The continuity of literature, poetry, folklore and mythical figures in art is a longstanding tradition; deeply rooted in the history of Persian painting.” 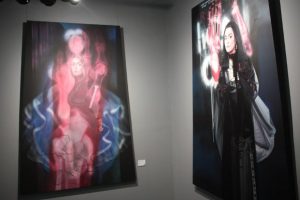 Bury all your Secrets in my Skin, and There is part of me in Everyone. By Saeed Ahmadzadeh.

Persian paintings were “full of a deeper meaning that lies beyond merely colour, pattern and design. Persian contemporary art is hence a representation of the emotion of human situations whilst maintaining a reflection of the artist’s feelings and thoughts.”

For this exhibition, the flagship image is…. a flag, and one based on the Union Jack. A university teacher and painter noted for his abstract calligraphy, Fereydoon Omidi has contributed UK from his flags series. In oil and fluorescent colour with corona on canvas, the work sports thick layers of colour and a structure which sustains the rhythmic repetition of Persian writings. In parts the original form of the flag and the Persian lines are entwined and integrated. The artist wants this banner to represent friendship and understanding between cultures which he believes can lead to global peace and stability. 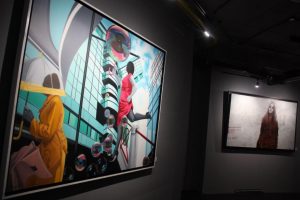 Bita Vakili is “the most expensive female artist in the Middle East,” and she sees her work as reflecting the dynamism in Iran’s society. A professional painter who has shown at more than 70 solo and group exhibitions worldwide, she scored record sums of $25,000, $32,000 and $48,000 at Christie’s 12th Dubai auction. Here she shows untitled works, mixed media on canvas, from her Pulse of the Earth series. One critic describes the work as embodying a world of particles and galaxies, drifting between abstract and figurative expression.

Outstanding are Tahereh Samadi Tari’s paintings which depict isolated figures adrift in modern urban settings. Her style is reminiscent of photography or even of cinematography, but it is oil on canvas. Here we see examples from her Abeyance of Presence series. 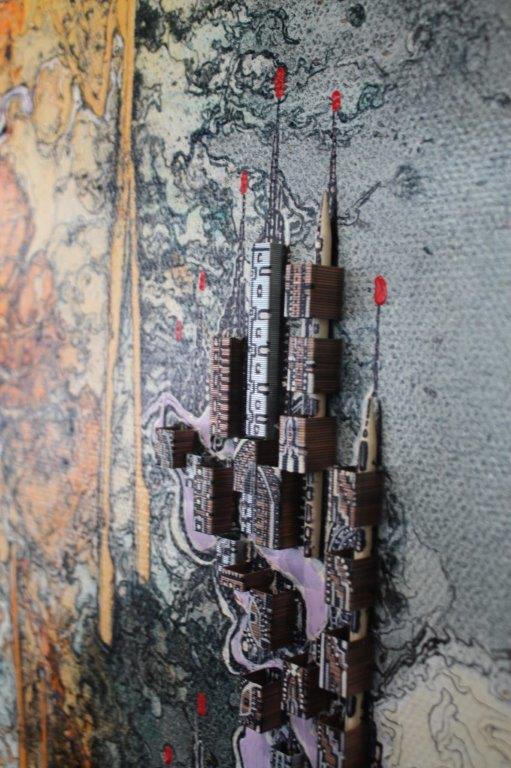 Her bravado manner has drawn a comment from Master Parviz Kalantari that it challenges modernism and shows humanity in a situation alien to itself. The atmospheres and locations represent utopias after the industrial revolution. Machines have made women, dressed in stylish garments, but with only shattered umbrellas to protect themselves from the storm, the main victims of this historical destiny. Tahereh Samadi Tari has exhibited many times in Tehran, London and New York. 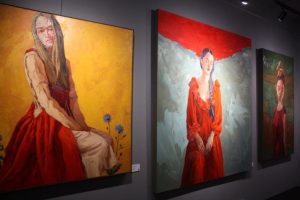 Ali Nedaei brings almost 40 years of experience to examination in a modern and dynamic way of mythological and classical themes. He switched from painting to drawing mode in 2016 and to works of larger scale than previously. He uses silver marker on canvas for The Battle of Lion and Myth Nos 1 and 2, from his series Amongst the Myth, which is based on the national epic Shahnameh.

Ohan Shirozhan, who studied in Iran, Romania and Moldova, depicts what appear to be individual women “in a background which has lost its time and space.” Rather than portraits, these mixed media compositions on canvas are visualised forms of subtle feelings, and reflecting his background, display touches of eastern Europe colour against background traditional Persian motifs. Untitled, mixed media on canvas. 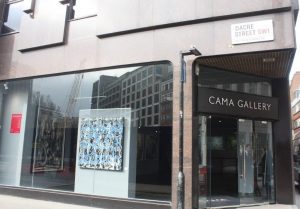 Cama Gallery is in St James’s.

With a kind of “pop realism,” Saeed Ahmadzadeh focuses on the reality of life for women in Iranian society, “a society prone to explosion and change.” The paintings “carry with them the issues that lie ahead as well as those that have occurred in previous years. From the gender revolution in 2009 to the legal demands and issues related to the social class system.” Acrylic and oil on canvas, two works are called Bury all your secrets in my skin and There is part of me in everyone.

Hooman Derakhshandeh has acrylic and oil on canvas works including Entry from his Venus series. “Behind the calm and poised surface of his paintings, one can see and hear the silent screams of all the girls and women who for centuries have suffered repression under the heavy hands of our extreme patriarchal societies,” says the catalogue, “whether from the outside or the sad self-censorship within.”