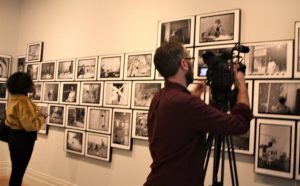 Asparagus rolls – 25c each. Such tempting fare in a smart American deli would have been considered a pricy snack for the hungry poor during the Great Depression of the 1930s.

In a photograph from the time, three comfortably-off ladies prepare to select from a lavish array of cakes and cookies. 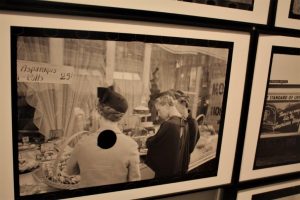 While the fashionably-attired few could indulge in fancy pastries, struggling whites and blacks alike could only gawp in frustration at cinema and publicity images of the so-called American Dream.

How to get to grips with the massive unemployment, which threatened social upheaval?

One attempted solution was the creation of the Farm Security Administration, part of the New Deal programmes of Franklin Delano Roosevelt. At the information division of FSA in Washington DC, its chief, Roy Stryker helped mastermind an initiative to chronicle 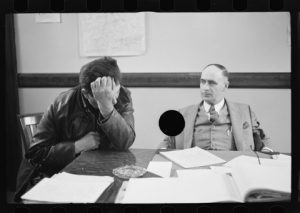 through documentary photography between 1935 and 1944 the presumed progress in tackling desperate inequality.

The FSA commissioned men and women who were to be among the leading photographers of the era to record the realities of rural life.

What became public later was the ruthless method of editing employed by Stryker (1893-1975) in his final selection of images.

He was fundamentally a good picture editor: he issued detailed instructions to his team on how to get the best out of their subject matter in the field and ensured that they were properly paid – but when the photos were in, he and his assistants culled many that in a different context would have been prize-winners. To the chagrin of his cameramen and women, their unwanted negatives were mutilated to prevent them being published elsewhere. 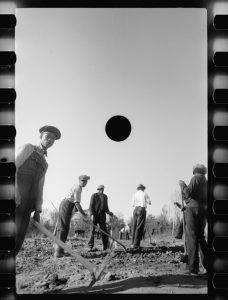 Thousands of pieces of film were destroyed or ruined, to be known as ‘killed negatives.’ The negative of each rejected image was spoiled with a hole punch; if a print was made, the image would be blotted with a black disc, obliterating or puncturing faces and landscapes.

In a first for a UK institution, Whitechapel Gallery in London has put together an archive of prints from 70 of these ‘killed negatives.’

What amounted to a kind of censorship has backfired some 88 years later, making the content of the shots even more poignant than the original intentions.

The digital prints have been scanned from black and white negatives, many by courtesy of the Library of Congress prints and photographs division.

First staff photographer for the FSA was Arthur Rothstein (1915-85) and kicking off the Whitechapel display is a photo, described as possibly related to a sharecropper’s wife and children in Arkansas in August 1935. Rothstein was later to become director of photography for Look magazine. A vertical line of four punch-holes cruelly perforates his moving scene, which in terms of composition and lighting is as close to perfection as could be imagined.

A 1937 photo by Russell Lee (1903-86) is punched through at the centre, obscuring entirely the face of a farmer in North Dakota. 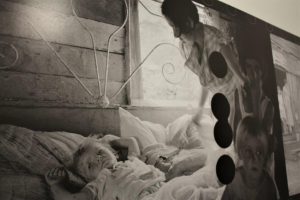 In an image by Paul Carter, the black disc hovers next to a shed tilted on its side. It is believed that this was designed to show tobacco fields devastated by flooding on the Connecticut River near Northampton, Massachusetts in March 1936.

Tarnishing a photo by Carl Mydans, the punched hole looks like a dark sun in the sky above a group of farm labourers struggling to clear terrain in Maryland in winter 1935.

Another top cameraman, Theodor Jung (1906-96) captured the moment when a man who is believed to be a rehabilitation client – a person advanced loans to try to get them started again in productive work – shows distress over his accounts. The shot was taken in Jackson County, Idaho. Before taking up photography, Jung had been a chart expert, preparing statistics of unemployment, which would have heightened his awareness of the straitened social conditions of the time.

Walker Evans (1903–1975) in summer 1936 photographed a woman, possibly Lily Rogers Fields, cradling her child, in Hale County, Alabama.  The ‘kill’ symbol is drilled bang through the middle of the photo, and her lap.

The Whitechapel commentary says: “The photographs that have now been produced ironically transform an act of censorship into abstract, conceptual and strangely beautiful pictures.” 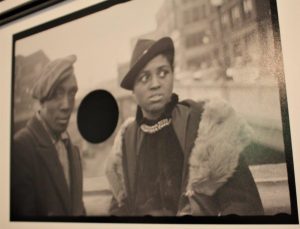 The photographers include Dorothea Lange (1895–1965). Others are Jack Delano, Theodor Jung, Edwin Locke, Ben Shahn, John Vachon and Marion Post Wolcott. Stryker went on to work in the 1940s as a successful public relations documentary maker for Standard Oil.

Alongside the prints in the display are personal and administrative records of the photographers, and the 21st century responses to the haunting images from the 1930s of artists Etienne Chambaud, Bill McDowell, William E Jones and Lisa Oppenheim.

Whitechapel’s Nayia Yiakoumaki, assisted by Inês Costa, is the curator. The exhibition is supported by the Killed Negatives Exhibition Circle: Beth & Michele Colocci.

Killed Negatives is at the Whitechapel Gallery (whitechapelgallery.org) until August 26, 2018.