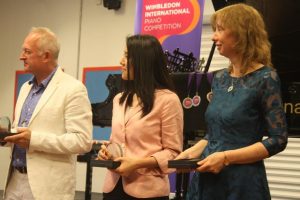 In a memorable debut, Wimbledon International Piano Competition has lived up to its name by impressing a signature on the global as well as local and London classical music scene.

Its persuasive array of pianistic talent confirmed that Wimbledon was on song in saluting a new set of champions of the keyboard – coincidentally just days ahead of the 2018 opening of the yearly tennis tournament which is the area’s biggest claim to fame.

The scale of the achievement was underpinned by the commitment of more than 80 participants, ranging from one five-year-old and other early learners whose feet were well short of the pedals, to mature and practised adults. 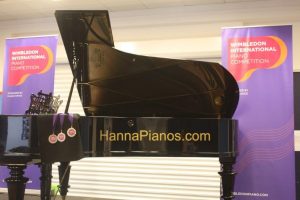 Bechstein at the ready.

All soared to the high standards anticipated by competition founder and musical director Dr Sally Wave, who is an accomplished pianist and educator, and competition head of organisation Fadi Hanna of A Hanna & Sons, a leading specialist piano business in Wimbledon.

Followers of the event were quick to congratulate both Sally Wave in achieving her vision of creating a global presence for the friendly and inclusive fixture, and Fadi Hanna for his genial enthusiasm as linchpin of the enterprise.

Sally told us later: “Tremendous non-stop effort went into setting up this first event of its kind for Wimbledon, and I think our achievement is a credit to the borough and to everyone who has worked with us. We were encouraged by messages of support from far and wide including from North America. 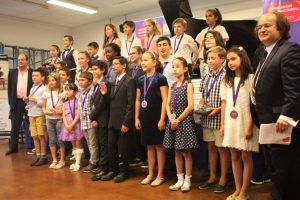 “We were delighted by the numbers who registered to take part and impressed by the keenness and devotion to performance of contestants and of people in the non-competitive categories. All in all, the outcome suggests we should be confident to go forward towards a second Wimbledon International Piano Competition, in June 2019.”

Fadi Hanna said of the competitors in the rounds on day one of the June 23-24 competition: “There were no losers, they were all winners: no-one went home upset. It was a fantastic day. The competition is helping to provide a platform for these young, talented musicians.”

The weekend underlined that there are few things in the world more beautiful than the sound of children making melodious music. The two dozen finalists were roundly applauded as they individually took to the stage for a winners’ concert of a host of showpieces ranging from a Brahms intermezzo, to a Shostakovich gavotte, a Chopin waltz, a challenging Liszt étude, and a jazzy number called Willie Wagglestick’s Walkabout.

Performers demonstrated their capability at the mighty Bechstein on the platform in the hall of the recently expanded and refurbished Pelham School, which is a short distance from the Hanna Pianos saleroom and workshops in Kingston Road, Wimbledon.

The afternoon got off to an engaging start with a spirited rendering by the youngest entrant, Haruna Nakamura, of When the Saints go Marching In. Audience members loved her quiet confidence and her clear competence. 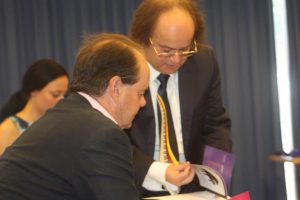 She was followed by Andrew Zheng, aged eight, who produced a splendid performance of the transcription For a Girl or a Woman from Mozart’s Magic Flute.

Travelling from Sofia, Bulgaria, 10-year-old Boyan Yurukov who scooped a gold medal, charmed the company with his interpretation of The Cat from Prokofiev’s Peter and the Wolf. Boyan, whose favourite composers include Mozart, adds the Wimbledon success to his achievements in his home country. His mother Velislava Yurukova said later: “We are so proud to be here because the first [Wimbledon competition] is always the first – you cannot repeat it.” Mrs Yurukova is by profession an organiser of events and a translator of Spanish, Portuguese and English for tourists and officials. 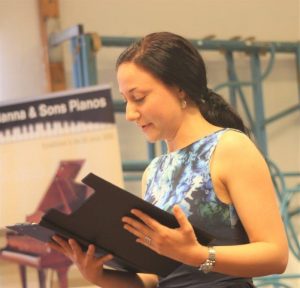 Among the gold medallists, Ebun Fasoyiro successfully tackled a Waltz in A by Carl Maria von Weber.

Ameli Sakai-Ivanova gave such a stunning performance of Bach’s Invention No 13 in A minor that one member of the audience exclaimed later: “This young lady would be a worthy successor to the greats such as Glen Gould, and she commands a more stately tempo than the Canadian maestro!”

After further stirring performances, the concert section was concluded by the gifted Ann Claire Herr executing the allegro assai movement from Muzio Clementi’s sonata in G major, opus 1 no 2. Clementi, born in Rome, was the “father” of a new instrument in the 18th century – the piano. He spent most of his career in London and in 1771 dedicated this sonata to his English patron, Sir Peter Beckford. The winners and their concert pieces were introduced by piano teacher Nikolina Sokerova. Three of the youngest winners.

Stephen Hammond, MP for Wimbledon since 2005, and whose parliamentary interests include transport, financial affairs and health, admitted he had failed to get beyond grade one in his piano studies, adding: “I am in awe of what we have heard today.”

Mr Hammond stayed for the full two hours of the event and presented the medals and awards.

Sally Wave was joined in watchful adjudication duties by Yukiko Shinohara, an accompanist at Trinity Laban Conservatoire of Music and Dance at the Old Royal Naval College, Greenwich; and Ken Virgin, a teacher with an excellence qualification from the Associated Board of the Royal Schools of Music. 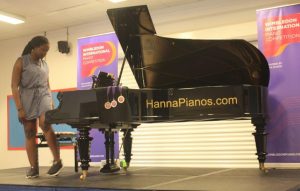 The top three competition winners are being each invited to play a single piece at the concert entitled Music for the Soul, to be given by Trio Bourgas on July 20 at Holy Trinity Church, 234 The Broadway, London SW19. Those winners are Dexter Porter, Mia Tokareva and ZheFan Ma. At the competition concert they played, respectively, Bow-Chicka-Wow-Wow by Worcester-based teacher Ben Crosland; The Day is ended by Nikolai Rakov; and Clowns by Dmitri Kabalevsky. 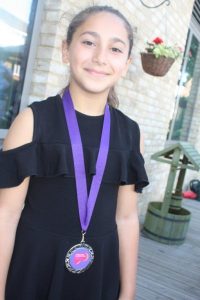 Trio Bourgas is the fruit of a reunion of Sally Wave and two fellow students who all grew up in the Black Sea city of Bourgas, who studied together at Sofia, and since moved abroad. For the occasion, Petia Kassarova (cello) is flying to London from New York and violinist Joy Tedford from Texas.

Established in 1960, A Hanna & Sons Pianos is a family-run business that sells, hires out, tunes, reconditions and repairs pianos. Fadi Hanna learnt his trade working for 15 years with his father who established the business in 1960 in Lebanon. He said that a principle of his father was to tune a piano for every customer “as though they were concert pianists, even if they are five years old.” Fadi, who with his brother Chucri has long been involved in local cultural life, extended warm thanks to competition sponsors and supporters including the Allaboutshipping team which has contributed journalistic coverage.

As the audience dispersed for refreshments in the shaded garden of the school grounds, people agreed that there was one word that summed up the achievements of the initiators, organisers, suppliers and volunteers in establishing Wimbledon International Piano Competition at an enviable highpoint, and that was… Bravo!