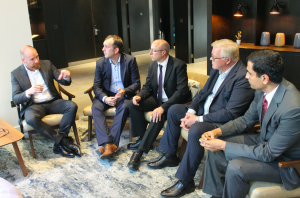 The biggest challenges to IoT adoption have been overcome say NAPA, Danelec Marine, ClassNK, and Inmarsat

For Ilmo Kuutti, President of NAPA, this is driving real change in the industry. “The availability of AIS data is already helping avoid some of the biggest challenges, such as rush-to-wait, and we’re consistently seeing that increasing transparency of ship operation is a powerful motivating force in driving greater vessel efficiency.”A wariness towards data-sharing and transparency continues to be a barrier; however, Kuutti noted that attitudes were changing quickly as the benefits of data became more widespread. “Five years ago shipowners didn’t want to discuss where their ships were sailing. Now with AIS data you can see where they are at all times. More data is available, and more is being used when it becomes available,” he continued. “The EU’s MRV requirements will also drive a lot of technology uptake that will deliver valuable statistical data.”

The panel quickly reached a consensus that the main initial challenges for IoT adoption have been overcome. As Hans Ottosen, CEO of Danelec Marine, said, “In order to have a really good solution in terms of performance optimisation and cost efficiency, you’ve needed to have high, frequent data collection. Until now that has been a bottleneck.”

“IoT installation is the simple part. For the basic IoT you’ll use existing sensors, and sometimes you’ll install additional ones, such as a flowmeter, to get to the next level. But at the beginning it’s about connecting the pre-existing sensors, and that usually only takes about a day.”

Vikrant Sharma, Lead Business Strategist at ClassNK, agreed with these points and predicted that in the next five years we’ll see “…more and more connected ships driven by lowering costs and capabilities to share more data. This is also likely to lead to more remote operations.” But as Mark Warner, Head of Marketing Communications at Inmarsat, noted, “There’s major polarisation between the leaders and laggards in IoT implementation.”

What will it take to get to the next level? For Sharma, it will be “an open platform to access data from ships safely, easily and efficiently will help further enhance development and operation of ship services. Further, a consortium of stakeholders in the value chain working together on an open platform will foster innovation and creating new value. If you want to get to the next level, you need to co-create value.” This was echoed by Mark Warner, Head of Marketing Communications at Inmarsat, who added that “Change is leadership driven. It has to be pushed from the board down.”

Ottosen noted that increased uptake will have a lot to do with owners’ and operators’ increasing awareness of what they’ve been missing. As he explained, “Each time you have an accident, there are usually 20 near misses. Currently we’re not learning from the near misses, but only when there’s a serious incident. A classic example is the Rena grounding in New Zealand. Rena had crossed the reef many times before, but the dangers signs were missed until it was too late. If there had been good IoT monitoring this accident could have been avoided.”

Ilmo Kuutti, went on to highlight one more example of the low hanging fruit available to shippers: “It is still very common for ships to travel faster than they need during the early stages of their voyages, and then wait for considerable time at anchor. Greater than 5% improvements can be easily gained just through better planning and execution.”

When asked what they saw as the biggest issue holding back investment, the panel was unequivocal: perception of cost, and the need for IoT skillsets to improve among onboard and shoreside users.

As Ottosen said, “Cost is always the first issue. Many companies remain traditionally minded, and they’re not looking to really understand IoT’s benefits. This means that they aren’t bringing in the right skills or training, and aren’t going to see the upside,” he said.

Taking that point a step further NAPA’s President, Ilmo Kuutti, mentioned the need there will be for social skills. “IoT will be a team effort between the captain, the charterer, the weather information provider, who will together create the best possible operations. Airline pilots are communicating throughout their voyages, and we need to encourage our ships’ crews to do the same.” 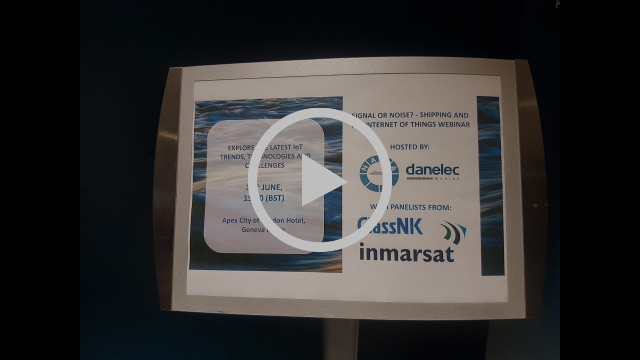 HELMEPA at the URBAN WASTE project activities in Kavala