HELMEPA at the URBAN WASTE project activities in Kavala

At the invitation of the Waste Management Authority of Eastern Macedonia and Thrace, HELMEPA participated on June 28, in an international meeting in Kavala on waste management, in the framework of the European project URBAN WASTE. The project has received funding from the European Union’s Horizon 2020 research and innovation program and representatives of 28 stakeholders from 14 European countries attended the meeting.

HELMEPA’s scientific staff member, Eleni Tsolka, presented the dimensions of marine pollution and the share of responsibility of all of us in its generation as well as in its elimination together with the association’s initiatives to protect our seas and beaches. Following the meeting and at the initiative of the Municipality of Kavala, HELMEPA coordinated a voluntary cleanup of the Rapsani beach, in which Energean Oil & Gas personnel participated. 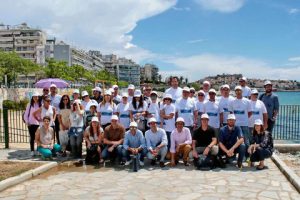 The cooperation between HELMEPA and the Region of Macedonia-Thrace and the Municipality of Kavala has been very constructive during recent years. In particular, in 2012 and 2015, the city of Kavala hosted HELMEPA’s mobile environmental exhibition, which was visited by local schoolchildren, as part of the association’s awareness campaigns executed with the support of Lloyd’s Register Foundation.

HELMEPA salutes the initiatives and efforts of the Municipality to further develop strategies for the prevention and proper management of urban waste.