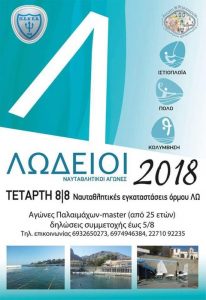 Don’t miss in Chios, the island of the winds, the island that rules Planet Ocean’s waves** and in particular at Vrontados, the second largest town on Greece’s fifth largest island, Lodia 2018.

This year the Sailing, Water Polo and Swimming races coincide with the Vrontados Centennial***! It was back in 1918 when the two administrations – North and South Vrontados – merged creating one municipality which gained its status thanks to independent shipowner Hadji-Frangoulis Andreadis (1872-1945) and the then prime minister of Greece, Eleftherios Venizelos.

There will be also competition games between “veteran” master swimmers for the 25 years old ones onwards.

To participate declare your interest until the 5th of August 2018 at the following numbers:

See you there for this festival in August!

*Lodia / Lodioi is in honour of the Los families whose home town is Vrontados and whose charitable offerings created Ormos Los and the adjacent swimming pool and sea-sports centre where PEKEV (the Progressive Civilised Social Union of Vrontados) has its headquarters.

**Chios with Innousses and Psara today controls 40% of Greece’s merchant fleet and both the presidents of UGS and GSCC come from Vrontados.