Another wildfire in Greece 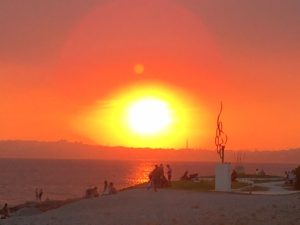 A …deformed sun set given the effect of the wildfires…

Following the wildfires nearly three weeks ago  (23/7) in Greece’s Attica region– Mati, Kineta, Rafina, Kato Voutzas and Little Red Port which claimed the lives of 94 people, many injured and still a dozen missing, another major wildfire rages now on the island of Evia.

Both Kontodespoti and Dirfis-Messopea in the mountainous region, just north east of capital Chalkis, are in the mercy of yet another wildfire. Kontodespoti has been timely evacuated in an orderly way.

The situation gets worse given also the winds which brought the cloud of these two wildfires down to Attica! The entire region above Piraeus and above the Saronic Gulf was covered.

There is an overwhelming response with appropriate and timely orders given for the evacuation of Kontodespoti. There are over 150 firefighters, over 60 fire brigade vehicles, nearly 300 men from Greece’s land forces and many water tanks, firefighting airplanes and helicopters.

We bring you herebelow live our impromptu coverage to see the extent and range of an area suffering out of this wildfire; the atmosphere creating a difficult to breath environment: